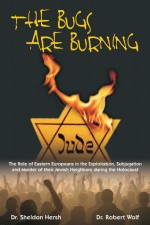 As flames enveloped the Warsaw Ghetto, a Polish resident of the city’s “Aryan” side, observing the incineration of his Jewish neighbors, was overheard remarking with satisfaction, “The bugs are burning.” In their book by that name, Sheldon Hersh and Robert Wolf describe how such dehumanization of Jews enabled large numbers of Eastern European civilians to rationalize turning a blind eye to atrocities against Jews and even actively collaborating in the Nazi carnage.

As the authors move swiftly from Poland to Lithuania, Latvia, the Ukraine, and elsewhere in the region, surveying the extent of collaboration, there is a depressing pattern. In town after town, the newly arrived German forces found legions of local residents eager to assist in the destruction of Jews with whom they had lived in seeming harmony for decades. Personal friendships, business relations, Jewish demonstrations of patriotism—none of these mattered much when the opportunity arose to give expression to dormant prejudices and violent impulses, or simply to plunder.

Readers will be struck by the high incidence of assaults initiated and undertaken entirely by local townspeople, with little or no direct German involvement. Residents of Jedwabne, Poland, after checking with the Germans as to whether it was “permitted to kill the Jews,” beat and burned to death 1,600 of their Jewish neighbors.

In Kovno, Lithuania, locals massacred thousands of Jews as housewives gathered to watch, holding their children aloft “to get a clearer view.” The Ukrainian village of Bursztyn enjoyed three days of self-rule in 1941 between the retreat of Soviet forces and the arrival of the Nazis; residents spent the time torturing and murdering nearly every Jew in town.

Many Eastern Europeans also distinguished themselves as avid participants in the hunting of Jews. “Hunting for Jews became a national pastime during the Holocaust,” Hersh and Wolf write, “as both German occupying forces and the indigenous populace sought eagerly to locate and detain those Jews who had successfully eluded an ever-tightening net.”

Local residents guided the Nazis to the hiding places of former acquaintances, classmates, neighbors. Some were deported to death camps; others were eliminated on the spot. The victims’ homes and belongings then became available at a fraction of their true value. For the Germans, Jew-hunting “was not unlike a crusade, a religious experience that was certain to bring glory to man and country.” For their Eastern European helpers, it was a chance to impress their new overlords, reap profits, and unleash their basest instincts.

The Bugs Are Burning is not a scholarly study, nor does it presume to be comprehensive. The authors are not historians, but a physician and a psychotherapist (one the child of Holocaust survivors), and their account relies heavily on books by others, which they quote often. It is, essentially, a summary of a small part of the vast body of existing literature, which will be useful primarily to those seeking a brief introduction to the topic of how the non-Jewish populations of various countries cooperated with the Nazis.

While there were numerous collaborators in Eastern Europe, there were also some exceptions, as becomes clear from Zsuzsanna Ozsvath’s riveting new memoir, When the Danube Ran Red. Professor Ozsvath, chair in Holocaust studies at the University of Texas, describes the near-idyllic life she had growing up in a prosperous, highly cultured Jewish family in rural interwar Hungary. Through young Ozsvath’s eyes, we follow the gradual intensification of anti-Semitism and implementation of anti-Jewish laws in the late 1930s and early 1940s, before the German occupation.

Although Ozsvath’s father had been a decorated World War I veteran of the Hungarian Army, in 1941, he was forced (by an anti-Semitic boycott movement) to sell his pharmacy at half its value and relocate. Ozsvath’s beloved Uncle Pali was even less fortunate. He was drafted into a battalion of Jewish slave-laborers who served the Hungarian Army and were starved, tortured and often murdered by Hungarian soldiers. One favorite method of humiliating the Jewish laborers was to make them strip naked (in the dead of winter), climb to the tops of trees, and crow like roosters. “Of the 50,000 Jewish men drafted between 1941 and 1943, 42,000 lost their lives,” Ozsvath notes.

Ozsvath’s immediate family, however, managed to continue their lives in a more or less normal manner. Their apartment filled with antique furniture, rare books, and musical instruments, “we were surrounded by great beauty and great culture,” Ozsvath notes. They lived in a little island of illusory comfort, largely spared the misery endured by most of Hungarian Jewry. But the German occupation of Hungary in March 1944 changed everything. Due to the active collaboration of the Hungarian government, military, and police—and more than a few ordinary citizens—an estimated 437,000 Hungarian Jews were deported to Auschwitz that spring.

It is at this point that Ozsvath’s narrative takes a path rather different from the general pattern of collusion described by Hersh and Wolf in The Bugs Are Burning. During the harrowing months of mid and late 1944, her family was sheltered, assisted, and ultimately saved by Christian friends, especially Ozsvath’s piano teacher, Gyorgy Farago, and her nanny, Erzsebet Fajo. Again and again, Ms. Fajo undertook feats of astonishing courage—all the more remarkable because she was only twenty-three years old—without which Ozsvath and her family undoubtedly would have perished.

A jarring scene witnessed by Ozsvath during the final days of the war offers her readers a stark reminder of how rare was the goodness she encountered, and how tragically widespread the collaboration of her countrymen in committing genocide. Ozsvath had been hiding in a closet in a bombed-out house on the banks of the Danube River, with the roar of gunfire all around as the Soviet Army advanced through Budapest in early 1945. Suddenly she heard shots right behind the house. She crawled through broken glass and rubble and encountered an image she would never forget:

[A] bunch of children, men, and women were standing on the bank of the Danube, on their chests the palm-sized yellow star. They were bound together by ropes. At least four or five Nyilas [members of the Hungarian fascist Arrow Cross movement, allies of the Germans] aimed their guns at them, shooting them into the river, which flowed red with blood.

The circumstances of this atrocity are grimly enlightening. Consider the scene: For the Germans and their partners in Hungary, the war was lost. Budapest will fall to the Soviets literally at any minute. The Arrow Cross soldiers have one last chance to survive the war—by surrendering, or perhaps by shedding their uniforms and disguising themselves as civilians. Certainly one would not expect them, at this point, to risk being arrested by the Russians for war crimes. Yet here are “four or five” Arrow Cross men—not one lone psychopath on a rampage, but an organized group choosing to use their final moments of freedom (perhaps their final moments of life) murdering defenseless Jewish prisoners. And this massacre was not a spontaneous outburst; tying the victims together, and then leading them to the riverbank required some thought. Someone had to come up with the idea. Someone had to procure the ropes. Others had to agree to participate.

These men made a conscious decision that shooting Jews into the river, making the Danube run red with Jewish blood, was more important than their own lives. That speaks volumes about the depth of the murderous anti-Semitism in Eastern Europe that played such a crucial role in the Holocaust, and from which only a fortunate few were spared.