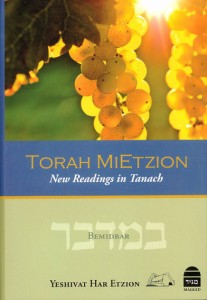 Yeshivat Har Etzion has earned a well-deserved reputation for breaking new ground in Torah commentary. Its new Torah MiEtzion series, recently completed with the publication of a volume on Bamidbar, firmly establishes this reputation but also lays bare a not-insignificant shortcoming. This selection of essays—from the “Parasha Series” that appeared on the popular Israel Koschitzky Virtual Beit Midrash web site, a “yeshivah” that spreads Torah over the Internet—is an additional accomplishment for Yeshivat Har Etzion and an impressive dissemination of Tanach study to larger segments of the Jewish population. But a question must also be asked, and that is: how have these studies changed their readers?

In the most recent volume, examples of fascinating readings abound. The various contributors often draw upon subtle literary techniques to examine plots and characters in Tanach, finding new interpretations hidden in familiar narratives. Among my favorites are Rabbi Mosheh Lichtenstein’s two essays on the breakdown of Moshe’s leadership in the Book of Bamidbar. In these essays, he highlights the inability of Moshe to grapple with the realities and mentality of the second “desert generation” and illustrates how this ultimately prevents Moshe from crossing the Jordan with them. This theme is taken up by several other writers in the volume and is ultimately anchored in the commentary of Netziv. Also compelling are Rabbi Nathaniel Helfgot’s contrasting of the sin of Ba’al Pe’or with the incident of the golden calf and Rabbi Elchanan Samet’s comparison of the language used in Bilam’s curse with that used to describe Pinchas’ zealotry. Nor should one overlook Rabbi Menachem Liebtag’s discussion of the two types of Biblical borders of the land of Israel. References to the larger borders that run “from the Nile to the Euphrates,” Rabbi Liebtag states, is used figuratively to convey the (hoped-for) Israelite influence over the most important cultures of the ancient world, and hence, of civilization.

Series editor Rabbi Ezra Bick refers to opponents of what has become known as the “Gush school” and their claim that its use of contemporary literary tools represents too big a break from tradition. Rabbi Bick counters this by explaining that many strands of the new approach date back to the commentary of Netziv (as noted above) and even earlier. More interestingly, he writes that the school is actually modeling itself on the methodology and function of classical Midrash. “If one would accuse the authors of this work of engaging in drush, the accusation would be accepted, I think, with pride. The methodology used here is a return to drush, not as homiletics . . . but as the reading of the text itself, closely, imaginatively and sensitively.” And it is indeed the combination of rigor and creativity cited by Rabbi Bick here that has always been the backbone of the best in parshanut.

Giving us a sense of what distinguishes this series, the introduction to the volume on Bereishit explains why the Gush school has been called a “revolution in the study of Tanach.” There, four aspects are cited as the center of this school’s approach: understanding Tanach through (comparing and contrasting other passages in) Tanach; the use of literary tools; the perusal of the larger context and the search for significance. The first three features distinguish the Gush school’s approach from traditional parshanut and the last element (among others) distinguishes it from academic study of the Bible. But while the first three elements are obvious in this series, the last one is not so readily apparent. The editors write that the search for meaning and significance is implicit in these writings. However, to me, they are so implicit as to easily get lost, such that one is often left with a superb textual analysis without anything truly novel or profound in terms of a message.

The above problem is likely due to scholarly modesty or to a reaction to the great structures of meaning built on rickety foundations that one finds in other quarters. But there is perhaps another reason for the hermeneutical minimalism here. As mentioned by the editors, the efforts of the Gush school are seen as part of a continuum with Talmudic studies that form the center of this and other yeshivot’s program of studies. True, the rigorous analysis brought from Talmud study is certainly most welcome and its fruits are readily seen in these volumes. The problem starts when the highly technical and largely unphilosophical nature of contemporary Talmud study makes its way into parshanut, a subject with a traditionally much wider sweep and purview. It is via this broader vision that the messages of Tanach resonate throughout the ages, informing each generation about its own challenges. Unfortunately, this broader vision is not as evident in this series.

The limitation described above is in no way meant to detract from the many strengths of this series or from the overall approach. True, while we may not learn much about life from these studies, we do learn a tremendous amount about our most central text, the Torah, and how we can better approach it. Over and over again, the various authors show us new understandings of the text that come from looking more carefully and systematically at Biblical texts. The happy result is that we will all read the text with greater sophistication and independence, something that Rabbi Bick correctly points out was typical of the great commentators throughout the generations, but largely abandoned in more recent years. After all, as I was once piquantly reminded, Rashi read the Chumash without Rashi!

And yet in spite of this, I remain haunted by a comment I recall from my yeshivah days. At the time, I was privileged to be in a small study circle led by Rabbi Dr. Cooperman, dean and founder of the Michlalah Jerusalem College for Women. Given his scholarly credentials as a master of Biblical commentaries, I remember being rather surprised when he told us that the ArtScroll Tanach series was making a much bigger contribution to the Jewish world than the Da’at Mikra of Mossad HaRav Kook. But I quickly realized that when properly understood, the statement was not only not outrageous, it was most likely true. Rabbi Cooperman’s point was that parshanut is not primarily meant to be studied for its own sake, no matter how perceptive and insightful the study may be. It is meant to have an impact on the lives of its readers in two major ways: to provide greater interest in, as well as understanding of, the text and some of its possible messages, and to induce greater commitment to the Torah and its core values. In either of these areas, accessibility is a key factor. And in striving for accessibility, a writer must not only make his writings clear and comprehensible to a typical yeshivah high school graduate, he also has to say something that interests the general reader. No doubt, the Torah MiEtzion series does accomplish both of these goals for many well-educated readers. Yet precisely because of its sophistication, it is not for everyone. And while this is not the problem of the series, it is a problem for the Jewish community and its religious leaders.

In seeking to deal with the need to reach out to the broader community, the commentaries of Rabbi Samson Raphael Hirsch, for example, stand out as a work that was able to retain its sophistication while captivating the interest of the average lay reader as well. In that regard, it should serve as a model of the work that still needs to be done. Commentaries like the new Torah MiEtzion series bring us at least half of the way. It now remains for the authors, or others like them, to provide something that will be able to have the more mass appeal of the works of Rav Hirsch without compromising rigor and depth.

Rabbi Francis Nataf is a Jerusalem-based educator and thinker. He is the author of multiple volumes of essays on the Torah titled Redeeming Relevance: Explorations in Text and Meaning (Jerusalem, 2010).