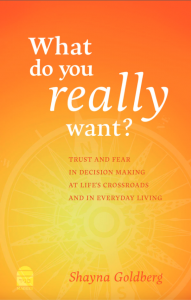 Shayna Goldberg, a teacher and mashgiach ruchanit in the Stella K. Abraham Beit Midrash for Women in Migdal Oz, Israel, has written a wise, concise and valuable book about how we make decisions and why making them seems so much more angst-producing these days. And yes, she offers a practical recipe for how to make the best possible decisions for ourselves based on trust, not fear.

What Do You Really Want? Trust and Fear in Decision Making at Life’s Crossroads and in Everyday Living was inspired by the author’s observation that her students have an increasingly hard time trusting themselves to make decisions. These range from the biggest, such as whom to marry, to choices as insignificant as whether to request the expensive latte that Starbucks offers as a free birthday special versus sticking with your daily favorite. With a strong belief in “personal autonomy and in each individual charting his or her own life course,” Goldberg sets out to analyze and concretize the elements that go into successful decision-making.

Why have decisions become so wrenching? Goldberg suggests several reasons, including today’s cultural imperative for tolerance and respect that renders us less willing to make judgments. Modern parenting is also far more permissive, and many “helicopter” parents coddle children to try and shield them from any possible difficulty or failure. Both of these parenting styles disable children from developing the capacity to trust their own judgment and learn from their mistakes. (Reading these points reminded me of Wendy Mogel’s bestseller The Blessing of a Skinned Knee: Raising Self-Reliant Children, which spotlighted this same problem.) Additionally, our seemingly endless choices in life today can become paralyzing when we finally need to choose one option; Goldberg points to a 2004 book by Dr. Barry Schwartz on this topic, The Paradox of Choice: Why More Is Less.

Goldberg has written this book with an Orthodox audience in mind, which is obvious not only through the specific situations she raises (e.g., dating, religious observance and making aliyah) but also by the occasional infusion of hashkafah as it relates to decision-making. However, the path she suggests toward more confident decision-making would be useful to anybody.

The five critical steps into confident, informed decision-making begin with research and collecting information regarding options. The second is what she calls extreme honesty about the consequences and fears on both sides of a decision. The third is to focus only on the next best decision that can be made, and not letting the unknowable future cloud our judgment. The fourth is to ensure the decision is not based on fear. Finally, step five is to trust our self-awareness of what we really want.

“When I refer to ‘want’ in this book, I refer to the deeper, more significant desires that we have for ourselves,” she writes. Doing what we want doesn’t mean making an impulsive decision based on a strong, overwhelming feeling of desire. Rather, doing what we want means paying close attention to a deep, intuitive feeling that rises up within us over time and pushes us in a certain direction, despite the fact that it might surprise us or others (p. 21).

Our seemingly endless choices in life today can become paralyzing when we finally need to choose one option.

Though people make better decisions and are happier with the outcomes when they learn to trust themselves, fear can lead to bad decisions by overpowering that inner voice giving us permission to trust. This fear can take many forms. For example, after being set on a law career for years, Brian finds the reality of law school boring and immensely stressful. He wants to drop out but fears that he has wasted time and resources, has made a mistake, and must chart a new, undefined course. Asher feels anxious about accepting a job offer as a school administrator after many years as a successful teacher. His fear of failure nearly overcomes his intuition that he is ready for such a promotion and desires it. Ilana, who dithered over the free latte at Starbucks, demonstrates the fear of missing out on a special opportunity, even a trivial one. But if she isn’t excited about getting the latte, accepting the “opportunity” will just lead to regret. The author herself shares a personal anecdote of her own fear of going for therapy to deal with a traumatic event. The prospect of therapy threatened her self-image as a strong, capable woman who is usually the one guiding others during their own difficult life situations; she also feared investing a considerable amount of time and money in therapy that might not be effective.

The majority of examples Goldberg offers involve issues relevant to young people, such as dating, engagement and having children. But this is a valuable book for people at any stage of life. There are many scenarios about decisions made at later stages of life, including whether to buy a larger, more expensive home outside of a couple’s current neighborhood; stay in a deeply troubled marriage or get divorced; or retire earlier than planned even when job satisfaction remains high.

For example, Jerry, a successful dentist in his mid-seventies who was “terrified” of retirement, was forced to rethink his plans when the pandemic hit. He was high-risk for the virus, and dentistry had suddenly become among the most dangerous of professions. Forced to shelter at home, Jerry unexpectedly found himself happily busy with hobbies, cooking, listening to shiurim, talking to his children and grandchildren and spending time with his wife when she wasn’t working. It took time for Jerry to clarify what he really wanted and to reassess what he had envisioned his future would look like.

Goldberg emphasizes that people are often afraid to give adequate time to this process, particularly in the realm of frum dating, where pressure to make rapid decisions can cause considerable tension and anxiety. She reiterates the need for people in these situations to resist outside (or internally induced) pressure, and to take the time and thought required for self-knowledge and confident decision-making. For example, the research for someone in shidduchim could involve deciding to date longer than initially expected. Allowing this extra time can lead to more honesty, the ability to focus on the next best decision, and greater trust in your intuition. It can also prevent mistakes such as breaking up a promising relationship in a moment of panic. On the other hand, developing trust in your intuition can also help expedite the ending of a relationship that you are dragging on only because you don’t want to hurt the feelings of the other person.

Goldberg often hears the following from those in the dating world: “No matter what I do or how much time passes, I feel like I will never reach clarity.” Her response is that we need “to reinforce our faith in our fundamental ability to make choices. Part of our faith in behira hofshit, free choice, is the belief that G-d empowers us to choose well and consistently grants each of us the necessary tools and insight to do so.”

This fear-versus-trust dichotomy is also crucial in education and parenting. Too often, young frum Jews reject our religious heritage because they were taught halachah and observance based on fear as opposed to a feeling of pride and joy in the gifts of a Torah-based life.

“Educating out of fear works very well—for the short term,” she writes. “But if we, as parents and educators, are seeking long-term results, then we should want our children and students to develop trust in their own values and confidence in their abilities to make good decisions, even when there is no fear involved” (p. 113). Children and students internalize the values we are teaching them even if it isn’t obvious at the moment. The key is in presenting the messages with positivity.

Many of Goldberg’s students have confessed that they feel like “spiritual charlatan[s]” if they reassess an aspect of their commitment, such as hair covering or davening three times a day. They cut themselves no slack when their circumstances change and are quick to question whether their spiritual commitments are still genuine.

“Students should be taught that true and lasting growth is a slow and steady process and that it is not all or nothing. They should learn that small steps are meaningful and valued and that they ultimately lead us steadily and securely in the right direction,” she writes (p. 123).

Goldberg concludes by showing how we can build confidence in our decisions, even as we realize that every choice has a cost: Trusting ourselves and our ability to make good decisions means accepting the complexities of life and even of our own character. It means building and maintaining positive narratives about ourselves and believing in our own genuineness and capacity for honesty with ourselves. . . . Ultimately, with trust, we can confront the inherent stress of cognitive dissonance and resolve it in ways that are not so harsh or exacting (p. 153).

This slim volume packs great value on every page. It is a wonderful guide for anyone who would like to stop wrestling with decisions and begin to make them with greater clarity and confidence.

Judy Gruen is a freelance writer in Los Angeles, California. Her latest book is The Skeptic and the Rabbi: Falling in Love with Faith (2017).