What’s the secret to marital longevity? Is the dream of living “happily ever after” really attainable? I asked the experts: four Jewish couples, happily married for at least four decades—one for more than six decades. The couples, ranging from irreligious to Chassidic and residing in three different countries—Italy, Israel and the US—agreed to share the valuable lessons they learned from one of the most challenging—and rewarding—relationships of their lives. 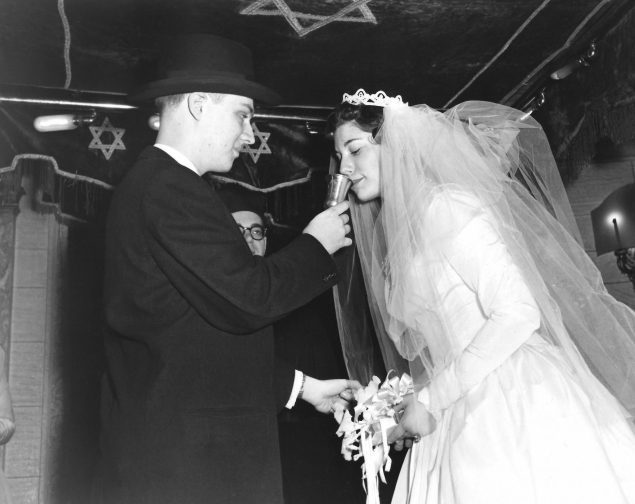 Eugene and Miriam Greenberg at their wedding, January 29, 1956.

Men and women enter marriage with different personalities, expectations and sensitivities. How do these couples handle the inevitable conflicts that arise?

“Love equals understanding the needs of the other; it also means giving in,” says Rabbi Michael Kanterovitz, a Sabra married to his Canadian-born wife, Malka, for fifty years. “I give in; she gives in. It’s the cementing force of marriage and hard work.”

During the early years of their marriage, Rabbi Kanterovitz served as a community rav in Canada and subsequently, England. Malka reveled in the life of a rebbetzin but could sense her husband’s discontent.

“He didn’t talk about it, but I saw his heart was in Israel,” she says. “I knew that’s where he would be really happy.” She suggested they make the move. It turned out to be a difficult adjustment for her.

“I worked on myself big time,” says Malka. “Whenever you make a decision, you have to take into consideration the needs and the aspirations of your spouse. The reason I’m living here is because I love my husband and want him to be happy.”

She says she learned the art of compromise from her husband.

“He has a fear of flying but he knows that I enjoy it,” says Malka. “He’s worked on himself a lot. We’ve traveled around the world on a shoestring budget. He was initially apprehensive [about traveling], but actually began loving it.”

Nissen and Judith Bron, married forty-four years, came into their marriage from opposite sides of the religious spectrum; he was Orthodox, she was not.

They met at the Hillel when they were both college students. Just about the time they agreed to marry, Nissen started becoming interested in Orthodox Judaism. Although his new wife wasn’t about to give up her lifestyle, Nissen decided to hang in there for the long haul.

From the start, Judith says she was drawn to her husband’s earnestness, his thirst for greater knowledge and his kindness. These qualities won her over.

To Nissen’s surprise, Judith came home one night with a sheitel and tried it on for him. “He said I looked gorgeous,” she says. “He really loved it.” When they moved to an Orthodox neighborhood, she decided to take a few more steps. “My feeling was, ‘When in Rome . . .’ so I put on a skirt, like the other mommies.”

“There were lots of areas in which we could have had arguments,” says Nissen. “But God gave me the brains to keep my mouth shut. I trusted we would work it out.”

Making Time
One secret to the success of these longtime marriages is that the couples continue to look for ways to strengthen their bond.

For decades, Malka Kanterovitz managed an art gallery in a Jerusalem hotel. She would work late at night to accommodate tourists. Consequently, the couple made sure to carve out a time to connect.

“On Friday mornings we share breakfast so we can talk,” says Malka. “Even when we don’t feel like talking, we make the effort. We believe in putting everything on the table. We used to have a ‘family counsel’ with our children once a week. If they had grievances, put it on the table and talk about it, let’s see what we could do about it. I believe that if you have an issue, find a solution. Don’t let it sit inside your kishkes. Deal with it. It will help you go forward.”

“Every morning, I say, ‘meet you after shul and Daf Yomi!’ We have our morning espresso and talk. It takes fifteen, maybe twenty minutes,” says Susie. “We discuss whatever’s on our minds, whatever is important to us.”

“You have to constantly communicate from day one,” Susie says. “It doesn’t mean shouting. When couples shout, no one is listening to anyone. Look each other in the eye and listen. If you let things fester, it leads to a shouting match; don’t let it get to that point.”

Effective communication can help forge a true soul connection. “Many times I’ll start saying something and my husband will say, ‘I was just thinking about that,’” says Susie. “When you communicate for so many years, your minds become wired similarly . . . That’s a big deal. And a treasure.” 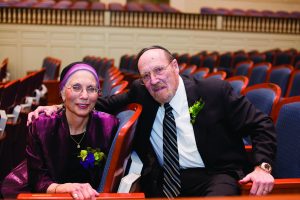 Eugene and Miriam Greenberg, married for more than sixty years.

Humor and Humility
When I asked Eugene and Miriam Greenberg of Los Angeles, married more than sixty years, if they had disagreements, they burst out laughing. When asked if either of them felt they had made mistakes in the marriage, Eugene quipped, “I don’t think we have enough time to go through them all.”

“I’ve learned that my way wasn’t necessarily the best,” he says. “I saw she was right much of the time even though I didn’t listen. Someone as smart as she is—I should have paid attention.”

But all of the couples agree that putting laughter front and center in the relationship helps tremendously.

“If both partners maintain a sense of humor, it minimizes any potentially difficult situation,” says Susie. “You can reframe anything that comes your way. My husband and I use humor every day.”

Sharing the Hard Times
When Judith’s youngest child was still an infant, she was diagnosed with multiple sclerosis. The condition affected Judith’s retinal nerve and left her eyesight impaired—but not her marriage.

“I thought, ‘This poor guy, look at what he has to deal with,’” says Judith. “I’d try to be independent. I’d get up in the morning and make the beds. Then I’d open the refrigerator and feel around for the bottle of apple juice knowing it’s in there somewhere. Finally I’d have to ask my husband for help. I feel so badly that he has to do these things for me. But he made it clear from the beginning that we’d go on.”

Despite the Brons’ challenges, they continue to cultivate their mutual love for reading and history. On Shabbat, Nissen picks out articles that interest the two of them and reads them aloud to Judith.

Enduring hardship can, of course, strengthen a relationshiop in the long run. When the Kanterovitzes went through a difficult time, they drew strength from each other. Their eldest daughter had three children who underwent kidney transplants.

“It was a very challenging time,” says Malka. “My husband and I were both very supportive of one another. I look up to Michael and try to emulate his middot.”

Work in Progress
All the couples conceded that in order for the relationship to flourish, it requires constant nurturing.

“I should praise Hershi more than I do,” says Susie. “Recently he was asked to give a derashah in front of the congregation. When we got home, he asked me, ‘What did you think of my derashah?’ I was so upset with myself; why didn’t I think to say something to him before he had to ask me? You have to constantly work on yourself. [Even after decades,] marriage is a work in progress.”

Malka concurs. “Marriage is a dynamic entity that you have to work on all the time.”

Bayla Sheva Brenner is a freelance writer and a regular contributor to Jewish Action. She can be reached at baylashevabrenner@outlook.com.