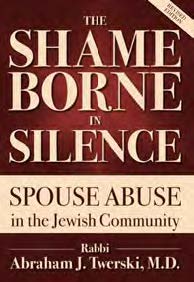 Rabbi Dr. Abraham J. Twerski, prominent Chassidic rabbi, psychiatrist and prolific author, packs a powerful punch in his book about spousal abuse in the Orthodox Jewish community. In this second edition of the book (the first edition was published in 1996), the author adds a new preface and an updated final chapter with resources. In the preface, the author states that the first printing of this book yielded such a negative response that his first few public appearances following the book’s publication required police protection. The current reprinting of the book has not raised anything near that kind of ire, perhaps an indication that the Orthodox community more readily acknowledges domestic violence as a difficult reality we must face.

Judaism views marriage as a holy, safe haven wherein a couple lives in harmony, with mutual respect. Unfortunately, though we prize marriage, we seem to have many marriages that are in trouble. The purpose of this book is to heighten awareness in the frum community regarding spousal abuse; to dispel the myth of the Jewish husband as someone who does not “hit his wife or abuse alcohol”; to place spousal abuse in the context of Jewish sources and to offer guidance on how to protect Jewish women from spousal abuse. The book concludes with a discussion on the fate of agunot as well as child abuse.

Rabbi Dr. Twerski’s knack for seamlessly weaving together Jewish sources and psychological concepts is evident throughout the book, making this a unique resource for anyone wishing to understand abuse in the Orthodox Jewish community. Though husbands are also victims of abuse, the author focuses on women as victims because this is most often the case in physical abuse; women who abuse men are more likely to use emotional abuse which, while harmful, is not immediately life-threatening. He discusses both types of abuse, as both physical and emotional abuse are damaging, and often what starts out as “only” emotional abuse escalates to physical abuse.

Throughout the book, the author engages the reader with vignettes, using dialogue to illustrate how the abusive spouse establishes control and power while the victim doubts herself and accepts blame for her behavior. This stylistic technique allows readers to recognize the control tactics and to feel the hurt, bewilderment and resignation of the victim.

The first step in remediating problems is acknowledgement. Hiding abuse deepens victims’ pain. Though awareness of spousal abuse is growing, many still mistakenly believe that abuse “does not occur” in the Orthodox community because following religious rituals shields one from wrongdoing. Rabbi Dr. Twerski argues that to be guarded from wrongdoing, one must adhere to more than religious rituals; one must also work to develop ethically and spiritually.

A running theme in the book is that abuse occurs because people do not respect themselves or others. If men would respect women (and themselves), they would not resort to either physical or emotional abuse. In a chapter ironically entitled “Preparation for Marriage, or How to Deal with Abuse,” the author offers some solutions to strengthen women in case they end up in an abusive relationship. He suggests that empowering women to be less emotionally and financially dependent on their husbands would foster more confidence, dignity and respect, and make women more likely to stand up for themselves.

As a psychologist and college educator for Chassidic and Yeshivish students, I have witnessed the troubled aftereffects of some young newlyweds who lack knowledge and have misconceptions of what marriage is about. The author suggests that because young men and women from Chassidic and Yeshivish homes enter marriage very young, without experience in relating to the opposite gender, their rebbeim and teachers ought to address these matters in the latter half of high school. Education builds awareness and knowledge prepares people for different eventualities.

Dr. Twerski’s goal in this book is to raise awareness, rather than to answer every question on the topic. This is not meant as a textbook on all aspects of abuse but rather as an eye-opener and helpful guide for community leaders to respond responsibly to the problems in our community. With regard to that, he has accomplished his goal. Inroads have been made; there are shelters and hotlines as well as organizations that work to educate the community. Nevertheless, more needs to be done. The republication of this book is a significant step in the direction of taking care of the community’s victims of abuse.