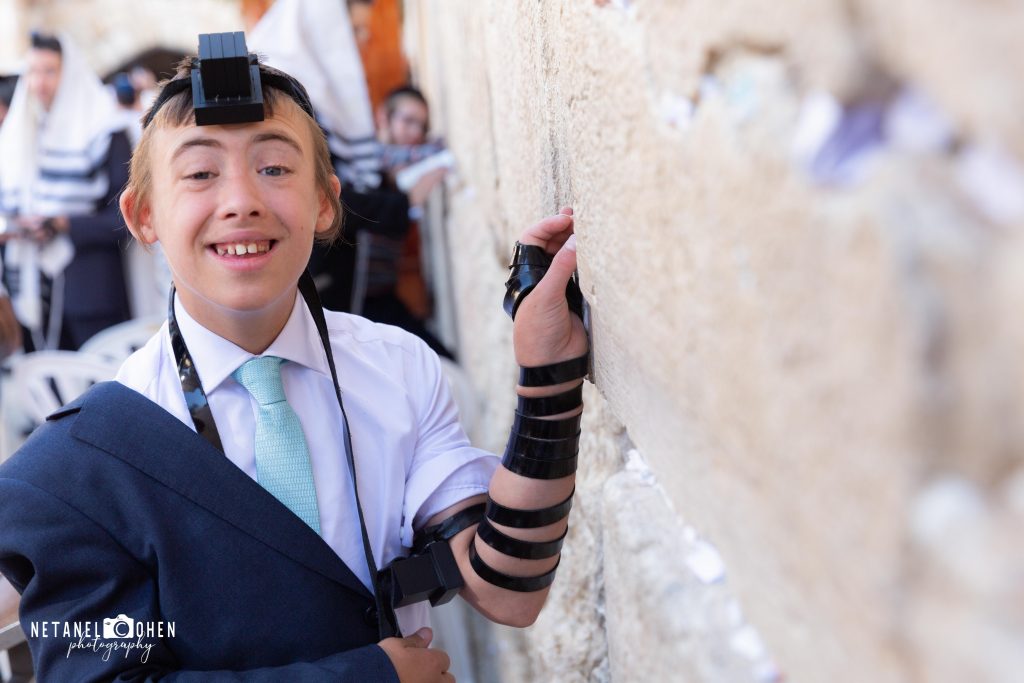 My eldest son, Yedidya, recently celebrated his bar mitzvah. Unlike other parents, we didn’t have huge expectations. Our simple goal for our son was that he should appreciate and be excited about the mitzvos that he would be accepting upon himself.

Yedidya, who has Down syndrome, was the quintessential bar mitzvah. Many participants confided in me that they do not recall seeing a young man more excited about accepting upon himself the yoke of mitzvos.

What exactly is the celebration of a bar mitzvah? Literally, the words mean “the son of a mitzvah,” conveying the idea of a deep desire and longing for mitzvos. The Sefer Chareidim equates the concept of being the “son of something”—ben Torah, ben Olam Haba, et cetera—with a child who suckles milk from its mother (“k’ben al cheik imo”). Milk is a life force that a young child can’t live without; similarly, the ideal is that the young man becoming a bar mitzvah desires and covets mitzvos. Concepts associated with the word “ben” convey a deep longing on our part for something special, transcendent and eternal.

For an entire year, Yedidya worked to master the cantillation of six pesukim from the weekly Torah portion. He totally immersed himself in the parashah of tzitzis, the maftir for Parashas Shelach, and never backed away from a chance to practice. Whether practicing in his Tikkun Korim, in the sefer Torah itself, or from memory while riding in the car, Yedidya was the paradigmatic masmid. Suffice it to say, the members of our household know those six pesukim in our sleep.

When you have a child with a disability, you subconsciously dread big milestones. There is fear on many levels as to how the event will turn out. Will the bar mitzvah boy fully participate as a typical boy would? Will the guests be sensitive and comment appropriately? Will the participants look past the disability and see a young man striving to be accepted just like every other thirteen-year-old boy?

And the ultimate barometer: Will your child feel good about himself?

Thirteen years earlier, when we discovered that Yedidya had Down syndrome, many tears were shed. There was disappointment as well as fear and anxiety about the future. The bris was delayed a number of weeks and ultimately took place immediately before shekiah. The young yeshivah men who participated tried hard to elevate the level of simchah. They danced for a long time in the darkness of a Yerushalayim summer night, attempting to impart chizuk and encouragement. “It is a simchah” was the message not so subtly communicated.

When you have a child with a disability, you subconsciously dread big milestones.

Before the bris, Rav Moshe Shapiro, zt”l, the sandek, looked me in the eye and promised me that Yedidya would be a typical child. During the ceremony, as he proclaimed, “zeh hakaton, gadol yihiyeh—this baby will grow up and mature,” Rav Moshe yelled aloud “gadol,” stressing the word. Frankly, I thought it was strange that Rav Moshe said my son would be a typical child, but he didn’t just say it to me; he promised me. And he did so with the utmost conviction.

Rav Moshe was telling me that Yedidya had potential. It might take a little more work to access it, but it was there.

While dancing during Kabbalos Shabbos at the bar mitzvah, my mind unexpectedly traveled back thirteen years to a very different time in our lives. I recalled the dancing in Yerushalayim. But this time, the dancing was not for the sake of providing chizuk. Rather it demonstrated our true simchah and our celebration of a boy who, with dogged determination, was on the cusp of accomplishing his goals with great confidence and poise. The entire Shabbos was a celebration of Rav Moshe’s prophetic words. My son had in fact become the typical child that was promised years before. There wasn’t a dry eye in the room.

When someone less capable than ourselves is so passionate about Yiddishkeit, it imposes upon the rest of us a certain sense of obligation. If Yedidya is a bar mitzvah in the truest sense, then the gauntlet has been dropped for the rest of us. When he wakes up his father to get to minyan on time, what possible excuse can the rest of us give? When he puts on his tefillin multiple times a day because of his affection for the mitzvah, can we just continue going about our business, casually strapping our tefillin on and off?

It is said that 90 percent of success is just showing up. Chazal teach us “lefum tza’ara agra—commensurate to the effort is the reward.” At a siyum it is customary to recite “anu amelim umekablim sechar—we [Klal Yisrael] toil and are rewarded.” We believe that Hashem assesses and values our efforts, not just the results. Yedidya reminds us all of the value of our hard work and passion in our avodas Hashem.

There is another lesson I learned from this simchah as well. We had the privilege of having my rosh yeshivah, Rav Yaakov Friedman, shlita, participate in the simchah, since we held it in Eretz Yisrael. At the bar mitzvah, he spoke about Yedidya’s self-assurance, and stated that it is rare to find an individual who is genuinely comfortable in his own skin. He shared that as he spends significant time counseling people, he often finds that many suffer from a certain inner tension or conflict. It is unusual to meet a person who knows with clarity exactly who he is—without doubts, conflict or inner tension. Yedidya exhibits just that: pure joy, focus and purpose. If only we had such clarity. Hashem created each of us pure and uncomplicated, but somehow, as Koheles posits, “asah HaElokim es ha’adam yashar, vehama bikshu cheshbonos rabim—God has made men simple, but they sought many intrigues” (7:29). We have many cheshbonos, calculations that confuse us and lure us away from our destined path.

As we gathered by the Kosel to watch Yedidya being called to the Torah in our holy land, his birthplace, we came full circle. Thirteen years ago, our journey with Yedidya began in Jerusalem, and now, we were blessed to witness him embrace his new sacred duty in Hashem’s presence.

Rabbi Dovid M. Cohen is the national director of community engagement for Yachad, the National Jewish Council for Disabilities and the rabbi of Congregation Ohr Torah in North Woodmere, New York. He is the author of We’re Almost There: Living with Patience, Perseverance and Purpose (2016).