It was well before sunrise when he pulled his car into the darkened parking lot. Stepping out onto the wet pavement, he paused to reflect on the events of the preceding evening that had brought him to this moment. It had started hopefully enough. He had arrived home at 8 pm, eagerly anticipating spending a quiet evening with his family and sleeping in his own bed for the first time that week. No sooner had he laid his head down, though, when his cell phone rang. It was them. He would be needed, they said, sometime between 2 and 3:30 in the morning. So, after three hours of sleep and two hours of driving, he found himself approaching a glow of lights emanating from the building ahead.

Over his shoulder he carried the bag that held the tools of his trade. The industrial torch. The thermocouple. The heat-resistant gloves. Tools that, in his skilled and experienced hands, made the difficult appear simple, the complex seem elementary. Though the job would be complicated, he would be up to it. He always was, for that was his duty. He would have loved to ignore the call, to have simply shut off the phone. But he knew he could not do that. He knew that when he heard the ring, he had to answer. Because they needed him. Not just the people he was about to meet, but the entire Jewish world. Because the people needed prune juice for Pesach. One hundred percent kosher for Passover prune juice, made on equipment that had been purged of any possible trace of chametz or kitniyot. And he was going to give the people that kosher for Passover juice. For he was dedicated. He was devoted. He was a professional. He was the OU. He was…The Kosherizer.

Perhaps the picture is not always so dramatic, but kosherization is often every bit as inconvenient, taxing and complicated. Of all the responsibilities that fall on the shoulders of the OU rabbinic field representative (RFR is the title OU gives to the mashgiach) the process of kosherizing a production facility is certainly one of the most challenging.

Simply scheduling a kosherization is an involved procedure. Companies run on very tight schedules and market demand dictates what they will produce and when. The needs of their customers seem to change by the hour and rush orders for products mean that schedules are altered in a flash. While companies try to be as accommodating as possible, the RFR’s beauty sleep is, surprisingly, often the last item of consideration when they create their final production schedule. In a perfect world, a company would plan a necessary kosherization 12 weeks in advance instead of 12 hours. But the demands of a highly competitive marketplace that operates on slim margins means that the OU must be prepared for a company to call on the shortest possible notice. And companies have every expectation that the rabbi will arrive at their facility when they need him.

Every type of industrial machinery has its own unique features. In addition, companies alter their equipment to meet their specific production needs; the RFR must make an assessment of every piece of the production line to determine what method of kosherization will be required. That involves consulting with the rabbinic coordinator (a rabbi in the main OU office who is responsible for managing that particular company’s kosher program) and, frequently, with the OU’s rabbinic advisors. Getting three rabbis together at the same time for a wedding can be challenging; imagine trying to put them together by phone from a plant in South Dakota at 3 in the morning (4 in the morning EST).

Libun often entails applying direct heat from an industrial blowtorch to the entire surface of the equipment until the metal reaches temperatures nearing 1000 degrees Fahrenheit. It is a challenge for everyone involved to keep cool under such conditions. The heat is extreme, the procedure rigorous and companies worry that such levels of heat might damage their machinery. My advice–do not try this in your home, at least not without the direction of a rabbinic specialist.

Hagalah is a purging process. This procedure requires that the equipment be cleaned until it is absolutely spotless, with no product residue, rust or other material adhering to the sides of the vessel. The equipment must then sit idle for 24 hours. At that point, the kettle, tank or other equipment to be kosherized is filled to the top with water, and heat is applied. The water in the vessel is brought to a rolling boil and, when a temperature of 212 degrees Fahrenheit has been attained, the kosherization is complete. In the case of small utensils, they must be immersed in boiling water.

I have found that whenever I kosherize vessels with hagalah, it is best to ask all plant personnel to either leave the room or turn their backs until the proper temperature is attained. This is one of many lessons learned through experience. As you can well imagine, a vessel containing thousands of gallons of water can take a considerable amount of time to reach a temperature of 212 degrees Fahrenheit. There are all sorts of “tricks of the trade” known to RFRs–such as injecting a live steam line into the water–that will help get a recalcitrant kettle to cooperate. Unfortunately, efforts are not always immediately successful. In one instance, I had waited many hours to get the water to an acceptable temperature with no success. The plant manager, chief engineer, maintenance supervisor, other workers and I stared at the kettle for an hour, examining and analyzing it from all angles in a futile attempt to figure out how to heat the water the extra 2 degrees needed to spill over. Finally, it dawned on me that we were ignoring one of the most fundamental laws of the natural world…that a watched pot never boils. I immediately instructed everyone present to turn their backs to the kettle, and a temperature of 212 was achieved within minutes.

The entire kosherization process is completely foreign to many plant personnel. The first time they witness it, many of them don’t quite know what to make of it. As the vessel fills with water, they gather around, watching with curiosity and wondering just what this strange-looking fellow with the beard is up to. Then, as the water begins to heat up, they start stepping back just a little, exchanging furtive glances with each other. Finally, when the water starts to boil over, I notice that they have a look of terror in their eyes. The first time I witnessed this phenomenon, I didn’t understand it. Then, I realized. They don’t view this procedure as a sterilization of the vessel for kosher quality reasons. They only see a rabbi performing a religious ceremony, akin to blessing the machinery. And the last time they saw a clergyman perform a ceremony using a tank filled with water, well….“Worry not,” I tell them in my most reassuring voice. “We are here to kosherize the equipment, not the employees.” The collective sigh of relief is audible.

Even after they have a grasp of the basics, workers new to kosherization find it somewhat confusing. They are knowledgeable about the requirements but are not sure where and how all the rules apply. A production manager, aware that there was a necessity for the equipment to be taken out of use when kosherized but not exactly sure at what point of the process that was supposed to happen, recently asked me, “Is there a hold time after you remove the utensil from the boiling water?” I gave him my most stern look. “Absolutely not,” I told him. “In fact, I wouldn’t advise holding it at all. Those things can be pretty hot when you take them out of the water.” Safety in kosherization is always the primary concern. Someone could get hurt. We must always make certain to follow GMP (good manufacturing practices) when we are on-site in a production facility.

Even when the kosherization is complete, the RFR’s work is not. In many cases, he must remain in the plant for hours afterward supervising all aspects of the ensuing production. Only when the last bottle is filled, the last cap twisted, the last label affixed and the last case sealed can he take leave of the plant and the personnel with whom he has spent the previous 18 hours. Walking slowly out through the warehouse, he reflects back on the time, knowledge and skill he has invested in the complicated and rigorous kosherization of the facility and realizes that, in the end, it all boils down to mesirat nefesh. He feels a sense of satisfaction in knowing that by virtue of his efforts, the people will indeed be able to enjoy gallons of precious Passover prune juice.

Pulling his car out of the parking lot, he considers the three-hour drive that lies ahead. Perhaps, if he goes quickly, he’ll arrive home before midnight. His thoughts are interrupted by the persistent ringing of his cell phone. After a moment’s hesitation, he answers. It is the dairy bakery 75 miles down the road with an urgent message: the oven needs to be kosherized immediately. The people need pareve pastries for Purim and President’s Day. Can he be there by 6 in the morning?

Thoughts of his family and home pass through his mind for a moment. Then, with a sigh of resignation, The Kosherizer turns his car around and heads off into the darkness. 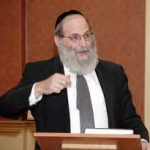 Rabbi Stone is the Senior Rabbinic Field Representative for OU Kosher. He is also an RFR for New Jersey and Northeastern Pennsylvania. He also serves as the rav and rosh kollel of B’nei Torah in West Orange, New Jersey. He travels extensively for OU Kosher, traversing the roads and skies of North America, frequently driving in the passing lane. He tries to avoid the failing lane.

5 2 votes
Article Rating
This article was featured in the Fall 2002 issue of Jewish Action.