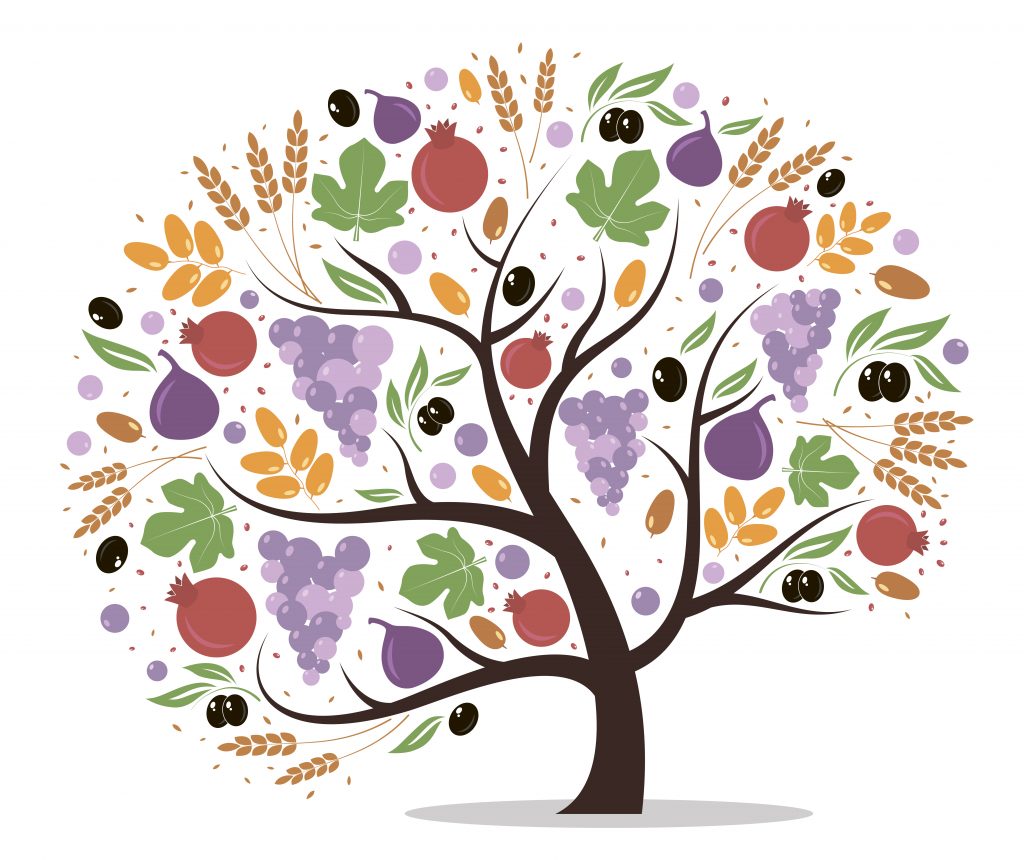 In agricultural-based ancient Israel, Tu b’Shevat—the traditional new year for trees—was a meaningful occasion celebrated with singing and dancing. Sephardim, who primarily lived in warm locales near the Mediterranean, long manifested a deep devotion to this festival, which they call Las Frutas (The Fruit). On the day of Tu b’Shevat, Sephardic families customarily visit relatives, where they are served a feast. The children, who are given off from school for the day, are encouraged to not only partake of the spread, but to take bolsas de frutas (bags of fruit) home with them. Among Ashkenazim, on the other hand, Tu b’Shevat was only marginally celebrated, primarily because it falls in the dead of winter in northern climates and the variety of fruit trees available was far more limited.

The community of kabbalists, who made their home in sixteenth-century Safed, maintained a profound regard for this minor holiday and developed a new liturgy and rituals for it. An expanded version of these prayers was collected in an eighteenth-century work appropriately called Peri Etz Hadar (“Fruit of the Goodly Tree”), which describes the Tu b’Shevat seder (ceremonial meal). This ceremony contains rituals such as drinking four cups of wine—each wine a different type—and sampling at least 12 fruits and nuts; others increase the number to 15, corresponding to the numerical value of tu. Iraqi Jews further expanded on the concept, increasing the number to a minimum of 100 fruits, nuts, grains, and vegetables.

There is a widespread custom to eat foods containing the sheva minim, the seven species for which the Land of Israel is praised in Deuteronomy 8:8–wheat, barley, grapes, figs, pomegranates, olives, and dates.

This recipe can also be prepared as a single large omelet and cut into bite-sized pieces. These slightly sweet omelets are served as a side dish or dessert. The fruit makes havij edjeh traditional for Tu b’Shevat.

Heat the butter in a large skillet over medium heat. Add the onions and carrots and sauté until softened, 5 to 10 minutes. Add the dates, currants, and lemon juice. Stir into the eggs. Add the salt. Heat the butter or margarine in a large skillet over medium heat. In batches, drop the egg mixture by about 1½ tablespoons to form thin patties. Fry until the edges turn golden brown, about 2 minutes. Turn and fry until golden brown. Drain on paper towels. Serve warm or at room temperature and if desired, accompanied with yogurt or jam.

In the flat, semiarid land of central Asia, crops must generally be coaxed out of the soil by means of a series of ancient irrigation canals. The result is an assortment of fruit, generally of immense proportions, and a medley of vegetables. Bukharans commonly cook vegetables and fruits together.

Heat the oil in a large saucepan over medium heat. Add the onions and sauté until soft and translucent, 5 to 10 minutes. Add the carrots, potatoes, and turnip and sauté for 2 minutes. Stir in the tomatoes, quince, apple, parsley, cilantro, and salt. Add enough water to cover the mixture. Bring to a boil, reduce the heat to low, cover, and simmer until tender, about 45 minutes. Serve with rice or noodles. Sprinkle with the additional parsley.

Olives are a ubiquitous component of Middle Eastern mezes (appetizer tables) and many meals.

Combine all the ingredients in a 1-pint jar. Cover and let stand in the refrigerator for at least 3 days and up to 3 months. Serve at room temperature.

0 0 votes
Article Rating
This article was featured in the Winter 2003 issue of Jewish Action.