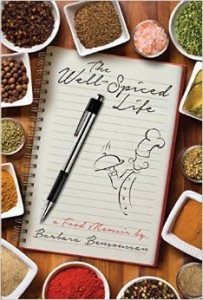 For Barbara Bensoussan, life has been a journey both inside and outside of the kitchen. As chronicled in her new food memoir, The Well-Spiced Life, the portraits of her journey as an Ashkenazic ba’alat teshuvah acclimating to a Sephardic Moroccan family are painted with a liberal dash of spice in her recipes and charming anecdotes.

Bensoussan captures the challenges and transitions of religious life and her “mixed marriage” to a “nice Jewish boy from Casablanca” in a lighthearted yet poignant way. Each concept or story is followed by a correlating recipe to mark the memory with flavor. With wry humor, she recounts her indoctrination into Moroccan cuisine and tradition during her mother-in-law’s four-to-six-week stays and the intriguing recipes she learned, like al-beraniya (candied eggplant jam that is eaten before Yom Kippur) or harissa (a hot red pepper dip).

For an American girl who grew up eating traditional American and Eastern European Jewish fare, cooking with foreign colorful spices opens her senses and inspires her cooking. After all, how many shades of potato are there?

An entire section of the book is dedicated to explaining the use and benefits of natural “food colorings” like saffron, turmeric and paprika. Seeing the weighty value Sephardim place on food being appealing to the eye as well as to the palate, Bensoussan has developed a more fundamental understanding of how spices enhance the role of food. She observes, “Nowadays foodies worship good food, but they’ve really got it backward: food is meant as a vehicle for worship. In Judaism, it’s through the most everyday physical acts that a Jew strives to connect to the Divine.”

Cooking for her large family and guests has allowed Bensoussan ample time in the kitchen to reflect on the meaning behind family meals and the common struggles women face today in feeding their families in a nourishing way. For Bensoussan, these contemplations are magnified by the contrast between a culture that values slow, time-intensive cooking and the scattered eating habits that resemble modern American family life. Despite the differences between Ashkenazic and Sephardic cultures, she concludes that the disparity is as much generational as it is cultural. When reflecting on her own upbringing, she acknowledges that “the flavor of those home-cooked meals we all remember fondly didn’t come only from Mom’s expert touch in the kitchen; the flavor was enhanced by the fact that those meals were eaten together.” Sentiments like this cement the foundation of her lessons in the book and what she has tried to accomplish with her culinary escapades.

In between the kitchen observations and ponderings, The Well-Spiced Life is buoyed by an undercurrent of practical witticisms that make Bensoussan’s experience relatable and engaging. One has to smile as she questions how women living in the sweltering heat of North Africa could spend so much time over a hot stove for a bowl of tchouktchouka (one of the beloved Moroccan dips). But by the end of the chapter, the reader feels inclined to head off to the kitchen, push up her sleeves and try it out for herself . . . or at least marvel at those who do.

Naomi Ross is a cooking instructor and food writer. She teaches classes throughout the tri-state area and writes articles connecting good cooking and Jewish inspiration.