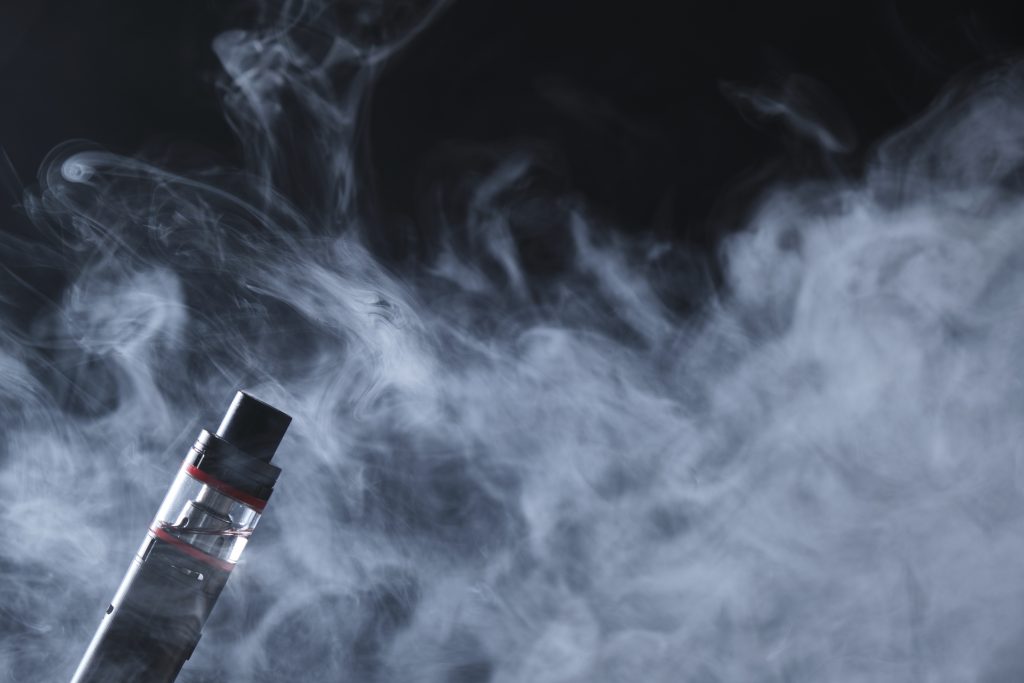 The e-cig, created in 2003 by Chinese scientist Hon Lik who wanted to help smokers curb their fatal habit, was originally geared for adults. Today, it’s become a major public health crisis in the US among young people.

One of the most recent illnesses to arise as a result of vaping is EVALI, an acronym for “e-cigarette or vaping product use-associated lung injury,” which has been diagnosed in over 2,600 hospitalized patients throughout all fifty states in the US. Fifty-seven deaths have been confirmed to date, mostly in young people. First recognized by the CDC in August 2019, EVALI causes symptoms ranging from shortness of breath to fever, and results in severe, sometimes fatal, lung infections. As medical professionals around the country noticed these symptoms in patients who had been previously healthy, they realized these patients shared a common risk factor: all of them vaped.

The EVALI outbreak is of grave concern, as over 25 percent of US high school students report using e-cigarettes in the last thirty days. Many suggest the figure is actually much higher and is likely to continue rising.

While it is not fully known what causes this potentially fatal syndrome, vitamin E acetate and THC (tetrahydrocannabinol) have been present in almost all cases. THC is the principal psychoactive constituent of cannabis, also known as marijuana, a drug made from the cannabis plant. (The liquid in e-cigs may contain nicotine, flavored glycerin or THC, in addition to other chemicals.)

What does halachah say about recreational vaping with THC-containing products?

In a teshuvah (responsum), the Noda B’Yehudah, Rabbi Yechezkel Landau, zt”l (1713-1793) (Yoreh De’ah 10) discusses whether it is halachically permissible for a Jew to be a hunter. He exposits that pursuing predatory animals is dangerous by definition and is therefore prohibited. However, for purposes of livelihood, it is permissible to put oneself at some degree of risk. This serves as the basis for permitting a Jew to be a policeman or fireman or serve in any other profession that involves some personal risk. However, to assume significant risk purely for recreational or sport purposes is assur (forbidden).

In a landmark teshuvah in Iggerot Moshe (Yoreh De’ah, vol. 3, siman 35), Rav Moshe Feinstein, zt”l (1895-1986) states that it is clearly forbidden to smoke marijuana. He provides eight reasons why this is so:

1. It physically destroys the body. The data we have today on EVALI is strongly consistent with this statement.

3. One under the influence of THC cannot properly observe the mitzvot and likewise will be unable to daven properly. Indeed, if he does pray, he hasn’t fulfilled his obligation of tefillah and would have to repeat the davening afterwards.

4. Marijuana causes desires for many inappropriate behaviors. I have personally cared for a number of patients whose addictions resulted in tragic sequelae. Unfortunately, numerous families have broken up, have lost livelihoods and had their lives shattered because of substance abuse.

5. It will cause a person to become a thief and prey upon humanity. Unfortunately, I’ve seen this too many times, as people who are unable to fund their habits commit crimes and various other improprieties to obtain illegal substances. While this is not a problem for every user, it is potentially a very serious concern.

7. It causes a Jew to transgress the positive commandment to be “a special people and a holy nation (mamlechet kohanim v’goy kadosh).” It is a tremendous chillul Hashem when a police officer or nurse comes to me and says “one of your people” is inebriated or high and is disrupting the emergency room or hospital ward.

8. It can lead to many other transgressions. Experience tells me that this is too often the case.

According to Rav Yechezkel Landau, the Noda B’Yehuda . . . assuming significant risk purely for recreational or sport purposes is forbidden.

Vaping with regulated nicotine products in a controlled setting under the guidance of a medical professional may be a potentially life-saving therapy for patients highly addicted to cigarettes. Such usage may have a role for select patients who have been unable to stop smoking despite trying several other medical modalities. This strategy has actually worked out well in the United Kingdom, but has not really taken hold in the US.

For someone not trying to kick a severe smoking habit, and certainly for someone not yet addicted to nicotine, e-cigarettes are potentially very dangerous. Nicotine is highly addictive, meaning it causes one to crave a smoke or vape. Nicotine is also a toxic substance, and can affect many different systems in the body, including increasing the likelihood of a heart attack or stroke. Many e-cigarette users can get more nicotine from vaping than they would from a regular cigarette.

The US surgeon general reported that e-cigarette use among high school students has increased dramatically, especially among those who have never smoked regular tobacco. The CDC states: “E-cigarettes are not safe for youth, young adults, pregnant women . . .”

Thus, I believe that most, if not all, contemporary posekim would say that vaping is an outright issur (prohibition) and certainly a breach of the commandment to “preserve one’s health.”

It is eminently clear that the current medical state of the art is that vaping with THC-containing compounds or nicotine is very dangerous. And while not every concern raised by Rav Moshe for marijuana use applies to THC-containing e-cigarettes, no one can predict how he or she will be affected by vaping. It is absolutely impossible to guarantee that the first vaping puff will not lead to horrific consequences, and therefore, from both a medical and halachic standpoint, no one should start vaping. One who has already begun vaping should seek professional help immediately.

Rabbi Aaron E. Glatt, MD, serves as assistant rabbi of the Young Israel of Woodmere in New York and chairman of the Department of Medicine, Mount Sinai South Nassau. He is also clinical professor of medicine at Icahn School of Medicine at Mount Sinai.

More in this Section: Nicotine is Back. Now What?

2 3 votes
Article Rating
This article was featured in the Spring 2020 issue of Jewish Action.