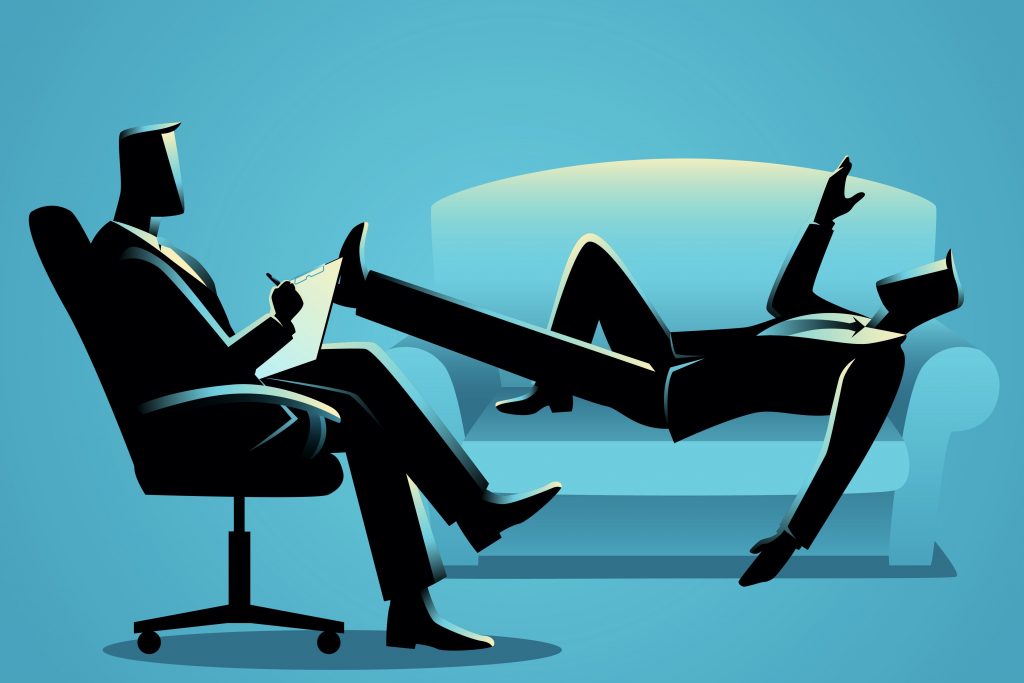 Leah, a thirty-five-year-old computer programmer and mother of three little girls, suffers from recurrent major depression. She has been treated, on and off, with psychotherapy and antidepressant medications. Leah’s husband struggles with a learning disorder and social difficulties. Leah feels overwhelmed by the pressures of raising and helping to support her family. At the same time, she desperately wants to become pregnant again as women in her community typically strive for large families. She also hopes to have a son. Recently, her middle daughter was diagnosed with speech problems. Symptoms of depression crop up—Leah has lost weight, can’t sleep and finds it difficult to concentrate. Her former psychiatrist moved out of town some time ago.

Ari is a twenty-three-year-old single Orthodox man finishing his senior year of college. His father, a prominent rabbi, is beloved by his community but discharges an explosive, critical temper at home. Ari excels at learning and knows that his father expects him to enter the rabbinate. Ari, however, is drawn to secular studies and wants to go to graduate school. In addition, after breaking up with a young woman that his parents adored, he has become casually involved with a non-Jewish classmate. He feels guilty, miserable and wants help.

How should Leah, Ari or any observant individual in psychological pain choose a therapist? Leah works hard to balance her mental health and her ideals for religious and family fulfillment. Her education, marriage and overall quality of life have been diminished by bouts of depression. When she recognizes the dismaying, familiar signs of a recurrence, she knows she needs to find a mental health professional. Leah wants someone who is competent and respectful. She thinks she may prefer a frum therapist so that she won’t have to spend her time explaining the culture of observant life.

At a deeper level, Leah feels pride in her capacity to bear and nurture children. She wants to help her husband fulfill the mitzvah of peru u’revu. Would a non-religious therapist understand the compelling forces that motivate Leah to expand her family even though she clearly is at her limit with her current situation? On the other hand, Leah’s past experience of working with a non-observant therapist had certain benefits. The anonymity of that office felt liberating. She was less worried about the stigma of seeing a mental health professional. And curiously, having to define terms and concepts such as Shabbat and mikvah prompted her to reflect on her own religious experiences in ways that she found demanding yet enriching.

Would a non-religious therapist understand the compelling forces that motivate Leah to expand her family even though she clearly is at her limit with her current situation?

Ari is at a crucial life juncture, on the cusp of making serious choices about vocation and relationships. A competent therapist would quickly realize that Ari needs to talk out his issues in a compassionate, non-judgmental environment. At least some part of Ari’s unhappiness stems from conflict with his father. The swirl of love, respect, anger and fear generates miserable anxiety. Ari needs to unravel this jumble of feelings and impulses. Would Ari’s choice of a non-frum therapist bespeak a wish that such a person would encourage him to “do whatever feels right,” no matter what the religious consequences? Conversely, would the choice of a frum clinician indicate the wish for a more benevolent parent? Is Ari’s unconscious hope that such a therapist would chaperone him back to the right derech? Is his fantasy that this ideal father would help him break up with his inappropriate girlfriend and resume full time yeshivah study? Or, would the presence of an observant therapist backfire, leading him towards further sabotage?

The question of how to select a therapist comes my way frequently—in panel discussions, consultations and casual conversations. Should mental health practitioner and patient be matched for religious commitment or other affiliations, such as gender or family background? Are there unique dangers if the therapist is not Jewish, let alone not religious? On the flip side, what potential problems lurk in the therapeutic match if therapist and client are both frum? Might they collude in establishing treatment blind spots such as avoiding issues that raise religious conflict? Might the assumption of mutual values inhibit the client from fully unburdening his heart or deter the therapist from asking potentially provocative or intimate questions?

Stigma plays a role in the process of choosing a therapist. There is a huge advertisement, sponsored by a national advocacy organization for individuals with mental illness, painted on the side of a building near my office. The sign reads, “Depression is a flaw in chemistry, not character.” I instruct my patients to look at that billboard when they walk back to the subway. Surely both the organization sponsoring the sign and I know that mental health encompasses far more than chemical activity at the brain/neuron level. We also know how besmirched and ashamed people with depression and other emotional disorders feel. They feel that their characters and their very souls are flawed.  Such people need reassurance that their individual identity is far more complex and nuanced than the diagnostic moniker of “depressive,” “schizophrenic,” or “obsessive-compulsive.”

At the same time, brain chemistry is the currency through which we perceive our world, make moral choices and conduct relationships. For any therapy to be effective, it must include the exploration of deeply personal and sensitive topics—including family dynamics, sexual life and idiosyncratic habits. Thus, a therapist is in a uniquely sensitive position to influence clients who will look towards him for advice, guidance and approval. The relationship between therapist and patient—the transference—places the therapist in a place of power. The patient constantly projects attitudes and feelings on to the therapist. He will alternatively react to the therapist lovingly or critically, while perceiving him as parent, confessor, desired romantic partner or friend.

Some individuals may wish that their therapist would directly counsel them as to a specific course of action. The job of a therapist, however, is different than that of a rav, teacher or other lay advisor. The therapist’s job is to look for recurrent patterns and conflicts without projecting his own preferences and beliefs. He must explore the issues and conflicts that the patient brings up. While clinical discretion and tact determine the depth of that exploration, nothing is off limits. Hopefully, insight paves the way for freer, more complete choice. Therapist and patient work together to define the compelling psychological constellations that regularly crop up in the patient’s life. They look for early warning detectors, signs and symptoms of recurrent distress.

Leah needs to anticipate and weather the inevitable storms of her mood disorder while leading the fullest life possible. Ari needs to work through his feelings towards his father. His adult, religious decisions should be determined by far more than hostility and rebellion.

Observant Jews have just cause to be concerned about therapists’ biases especially in matters of religion. The history of psychoanalysis is notorious for disdainful, deprecatory attitudes towards faith and practice. Many of the early psychoanalysts came from pious Jewish homes but abandoned Jewish traditions with a vengeance. Religious life based on non-scientific faith in a Creator was dismissed as primitive and obsolete. Insight and understanding were believed to hold the cure for what was formerly understood to be the suffering of the soul. Cumbersome religious structures and oppressive authority were to disappear like dinosaurs. The last several decades, however, have witnessed a shift in this attitude. Adherents of psychology recognize that even the most complete dissection of mental processes does not necessarily provide answers to the great questions of human life. The struggle for existential meaning, the mysteries of Creation and purpose, are still with us. At the same time, religiously devout therapists have demonstrated that psychological tools and techniques can reduce human suffering and even pave the way for deeper religious experiences.

The history of psychoanalysis is notorious for disdainful, deprecatory attitudes towards faith and practice.

My advice to Leah and Ari would be to seek out a therapist with the best reputation for clinical excellence, compassion and respect for religious life. I encourage them to check out the therapist’s professional credentials with referral sources they respect. I also encourage them to ask a potential psychiatrist/psychologist/social worker about his feelings regarding working with observant Jews. Consumers have every right to investigate relevant qualifications. Ultimately, they need to trust their own gut reaction. How did Ari feel during the first consultation? Did the therapist help put him at ease? Did Ari feel that his confidentiality was protected? Did the therapist take a complete history, even asking about touchy subjects such as substance abuse or medical problems? Did the therapist answer Leah’s questions adequately? Did he give her a sense of direction as to what the next step of treatment should be? Did Leah feel understood? Did she feel that the person on the other side of the desk could help her?

If most of the answers to these questions are “no,” I would urge Leah and Ari to look elsewhere for a therapist. If the majority of answers are “yes,” I feel satisfied that the therapeutic matches have solid chances for positive results. In a community where there is an abundance of mental health professionals, the question concerning whether the therapist should be observant should be determined by the comfort level of the client. The answer does not have much to do with psychiatric diagnosis. An individual grappling with schizophrenia or obsessive-compulsive disorder needs to talk about the experience of living with his particular affliction just as much as a high-level neurotic challenged by a crisis of faith does. Some people will not be able to work out their problems unless they are paired with an overtly frum therapist. Others won’t feel a necessary freedom of exploration unless they perceive their therapist to be religiously neutral or even non-Jewish.

The bedrock of a worthwhile treatment is the therapeutic alliance. When we look to establish other important matches such as marriages or business partnerships, we look for objective criteria. At the same time, we recognize that some incalculable part of any good shidduch is intuition and luck. After that, success depends on commitment and sustained work from both partners in the match.

Dr. Michelle E. Friedman is the director of pastoral counseling at Yeshivat Chovevei Torah and an assistant professor of clinical psychiatry at The Mount Sinai Hospital and Medical Center in New York.

0 0 vote
Article Rating
This article was featured in the Fall 2003 issue of Jewish Action.