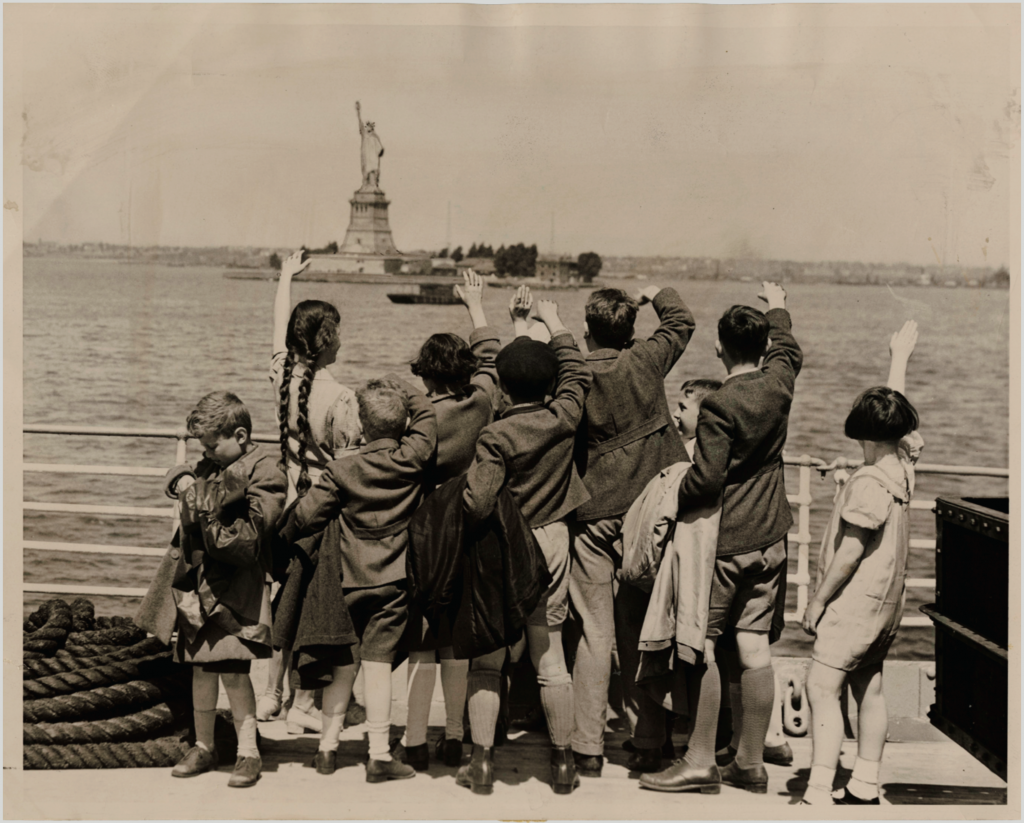 Jewish children fleeing Europe looking at the Statue of Liberty from the deck as they arrive in the US, June 4, 1939. Courtesy of the United States Holocaust Memorial Museum Collection/Gift of Julius Wald

Unquestionably, the strict American immigration policy, underlined by the Great Depression and the prevalent anti-Semitism of the time, which existed among both the populace and government officials, made it difficult if not impossible for Jews during the Holocaust to find a safe haven in the United States. Had the United States adapted its immigration policies in the 1930s to permit persecuted Jewish refugees to enter America or, at the very least, had it fulfilled the existing quotas, more Jews would had survived the Nazi era.

For decades following the end of the war, debates raged within the American Jewish community (and among historians) about whether American Jews did enough to save their European brethren.

History attests that during the 1930s Jews in America (along with non-Jewish citizens) responded to fascism and the Nazi persecution of the Jews with demonstrations, supported anti-German boycotts and provided financial support to Jews living under the Nazi regime. But these activities did not rescue Jews. Clearly what was needed was a change in the immigration policy, which neither the American government—including President Franklin Roosevelt—nor the American people wanted.

Notwithstanding factors including the Great Depression, isolationism and nativism, all of which influenced American policies and  the national mindset, a handful of Jews, non-Jews and organizations responded to the pleas for help not only from overseas family and friends, but also from strangers.

In 2013, the Museum of Jewish Heritage—A Living Memorial to the Holocaust in New York held a haunting exhibit titled Against The Odds: American Jews & The Rescue Of Europe’s Refugees, 1933-1941, which depicted the stories and noble actions of these heroic and self-sacrificing Jews who made rescuing European Jewry their personal mission. Among the rescuers presented in the exhibit were David and Jacob Kestenbaum, themselves immigrants who were successful furriers residing in Brooklyn, New York. The exhibit noted that the brothers “issued hundreds of affidavits to extended family, friends and total strangers.”

For decades following the end of the war, debates raged within the American Jewish community (and among historians) about whether American Jews did enough to save European Jewry.

Further research at the museum archives revealed 700 case files in the Kestenbaum collection. This remarkable collection of letters documents the horrific situation facing Jews in Nazi Europe, as well as the challenges they faced while pursuing refuge in America. Most striking among the array of supplicant letters received by the Kestenbaums are those from European Jewish leaders, rabbis and roshei yeshivah, whose correspondence reflects deep concern, personal responsibility and a commitment to the survival of their communities and students. Reading these letters and their desperate cries for help, one feels overwhelmed with grief.

These original letters and documents put a human face to history.

In addition, the 700 case files found in the Kestenbaum archives reveal the heroics, the determination and steadfastness of the Kestenbaum brothers in rescuing their brethren from Nazi Europe.

They overcame the formidable obstacles presented by American immigration laws. They disregarded the prevailing negative attitudes toward Jewish refugees. They claimed strangers as relatives as they provided an astonishingly large number of affidavits. They hired extra employees to deal with the increasing amount of paperwork necessary to obtain affidavits. They provided financial aid to Jews so they could leave their countries and travel to the United States. Even after the outbreak of war, when immigration to America was not viable, the Kestenbaums continued their rescue work. The files reveal their activities in aiding students of the Mir Yeshiva as well as students of Lubavitch who were stranded in Shanghai during the war.

It would be misleading to declare that the activities of the Kestenbaums dispel the reality of American Jewish inaction during the Holocaust.

The Jewish community in 1930s America faced various political, economic and social challenges that informed their responses to the tragedies in Europe. As a minority community living in a country with economic difficulties and ever-present anti-Semitism, Jewish leaders and citizens were cautious and hesitant to act. David and Jacob Kestenbaum disregarded these concerns and, guided by their religious convictions, answered the call for help. These businessmen from Brooklyn became activists for rescue and saved the lives of hundreds of Jews.

Unfortunately, there weren’t nearly enough David and Jacob Kestenbaums in America at this critical time.

A Discovery Sheds Light on Rescue Efforts During the Holocaust, by Susie Garber