In the competitive world of professional comedy, it pays to have a hook—some distinctive feature of biography or appearance that sets one performer apart from another.

Among Orthodox comics, Yisrael Campbell has the I-was-a-Catholic/My-aunt-was-a-nun angle all to himself.

And he’s the only one who had a series of brit milahs on the way to becoming an Orthodox Jew; hence the name of his former Off-Broadway one-man show, Circumcise Me.

Campbell—formerly Chris—dresses in his act the way he does the rest of the time: bearded, with dangling payot, he wears a black hat, long black coat and tzitzit out.

But he’s hardly Chareidi. “Hardly a hardliner,” he’s liberal on many social, political and religious issues, he says.

“I like having a very Jewish appearance,” says Philadelphia-native Campbell, who moved to Israel about a decade ago for a few months, and stayed there. Married, he lives in Jerusalem, returning to the States for his frequent performances. He simply likes the “seventeenth-century-Poland look.”

In his show he talks about his circuitous path to frumkeit, his upbringing as “vaguely Catholic,” his encounters with drugs and alcohol, his subsequent sobriety, his blooming interest in Judaism, his Reform, Conservative and Orthodox conversions and his multiple circumcisions.

“I’m the firstborn son of a manic-depressive Italian woman and a pathologically silent Irishman,” Campbell will state. “This makes me wildly emotional in a very quiet way.”

“Just for the record,” he will tell a crowd, twirling his long unkempt payot, his balding pate obvious. “This is the beginning of a comb-over.”

“My comedy is all based on my spiritual journey,” he says. “It’s a personal, very Orthodox picture. I want people to have a sense that searching for your identity is a good thing.”

His routine includes good-natured ribbing of the Reform Jew, the Conservative Jew and the Catholic. “But I’m critical of the Orthodox too.” And of life in Israel. “I can be much more critical of Israel because I live here.” Being born an outsider—to the Jewish community, to the Jewish State—gives Campbell an advantage, a comic’s stock-in-trade. “I notice things that I didn’t grow up with.”

Campbell’s act, which introduces the fundamentals of his adopted Orthodox life, is entertainment, he stresses. “It’s not a shiur,” a Talmudic lecture. And he’s careful to be respectful of his community’s authority figures. “You don’t laugh at rabbis.” 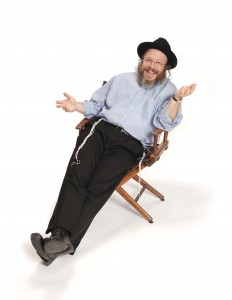 Yisrael Campbell talks about his religious journey from Catholicism to Orthodox Judaism in the former Off-Broadway one-man show Circumcise Me. Photo: Carol Rosegg