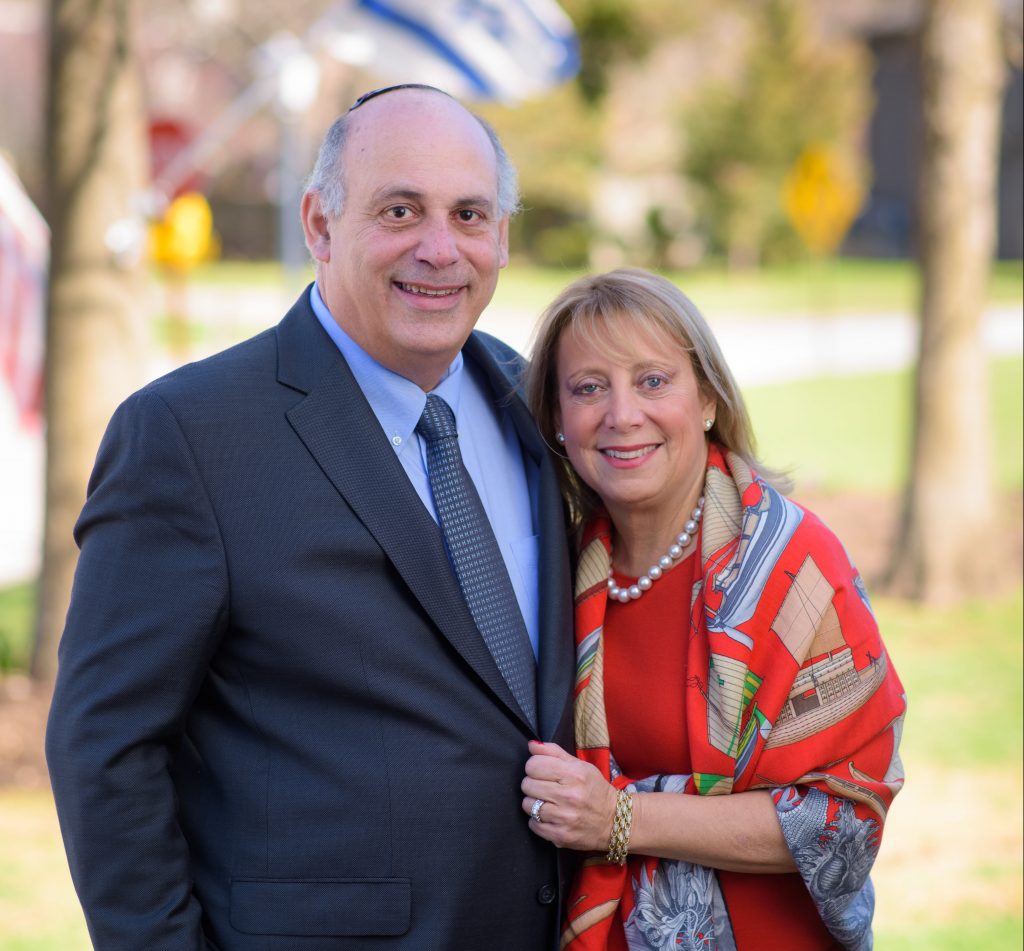 Shalom and Iris Maidenbaum from Lawrence, New York, have been involved in Jewish and Zionist causes for many years. Their inspiration for activism comes from the homes and neighborhoods they grew up in. Iris, from Kew Gardens in Queens, and Shalom, from Lawrence, saw a lot of good around them with an emphasis on Jewish activities, learning and love of Israel. The couple met after they had both transferred into the undergraduate business school at NYU. They married, and after graduating, Shalom became a lawyer and worked for a boutique New York City law firm as a commercial litigator. Iris worked as an independent tax consultant. With the birth of her four children, Iris opted to stay home, investing her energies into raising her children and supporting the local school and community organizations.

Living in Nassau County, one of the highest property taxed counties in the nation, makes owners sensitive to property evaluation, as it directly impacts taxes. After Shalom opened an office with a partner in Cedarhurst, a neighbor received an offer for a property tax reduction and asked Shalom to handle it. Shortly after, Shalom decided to take the leap from commercial litigator to marketing, and Maidenbaum Property Tax Reduction Group was born. The first year, Shalom reduced the property tax of seventeen homes. Currently, the Group reduces the property tax rates of over 60,000 homes annually.

The Maidenbaums saw first-hand the impact of NCSY when their son Benny attended NCSY’s Israel Experience at Bar-Ilan University, a program combining Jewish subjects with a first-year program at Bar-Ilan. Benny had a transformative experience and stayed in Israel for another five years, completing a degree at IDC Herzliya.

“Iris and Shalom have been incredible supporters of NCSY for years,” says Tiffany Yankovich, NCSY’s Associate National Director of Development. “From the first time I met them, I understood that they are very passionate about Jewish identity, passing down Jewish traditions and Israel advocacy. They are also extremely knowledgeable about current issues.”

“We want to encourage every self-identifying Jew and Zionist to become activists and fulfill a role to the best of their ability,” says Shalom.

“My personal passion is kiruv one-on-one. I believe that a positive attitude can influence others to incorporate more Judaism and Zionism into their lives,” Iris says.

To help guide these teens at the beginning of their Jewish journey, and to leverage previous investment in NCSY alumni, Shalom and Iris initiated the Maidenbaum Mentorship Program. The mentorship provides a framework of continuing Jewish education, giving teens someone to confide in and to serve as a positive Jewish role model.

Mentors and mentees are matched on similar personality, interests and shared career paths, with Rabbi Taylor checking in on the partners bi-weekly.

This past year, Iris also participated in an event with “TJJ for Moms,” NCSY’s program in partnership with the Jewish Women’s Renaissance Project (JWRP) that brings Jewish moms to Israel with a year of follow-up events to keep the spark alive. Iris was in awe of the level of enthusiasm among women who were only recently introduced to Judaism.

“Seeing this commitment among the leaders of the NCSY trip was very inspiring, and we are so thrilled to be part of this organization.”

A Family Affair—Riding to Inspire

Backed by dozens of sponsors, 115 riders joined the third annual Bike NCSY, powered by NCSY Alumni, to raise scholarship funds that will enable teens to have a transformative gap year of Torah learning in Israel before going to college. Riding the thirty-three-mile route, NCSY Alumni Connections Associate Nicole Chermak and her father Steven personally raised over $1,300. Bike NCSY raised over $130,000. 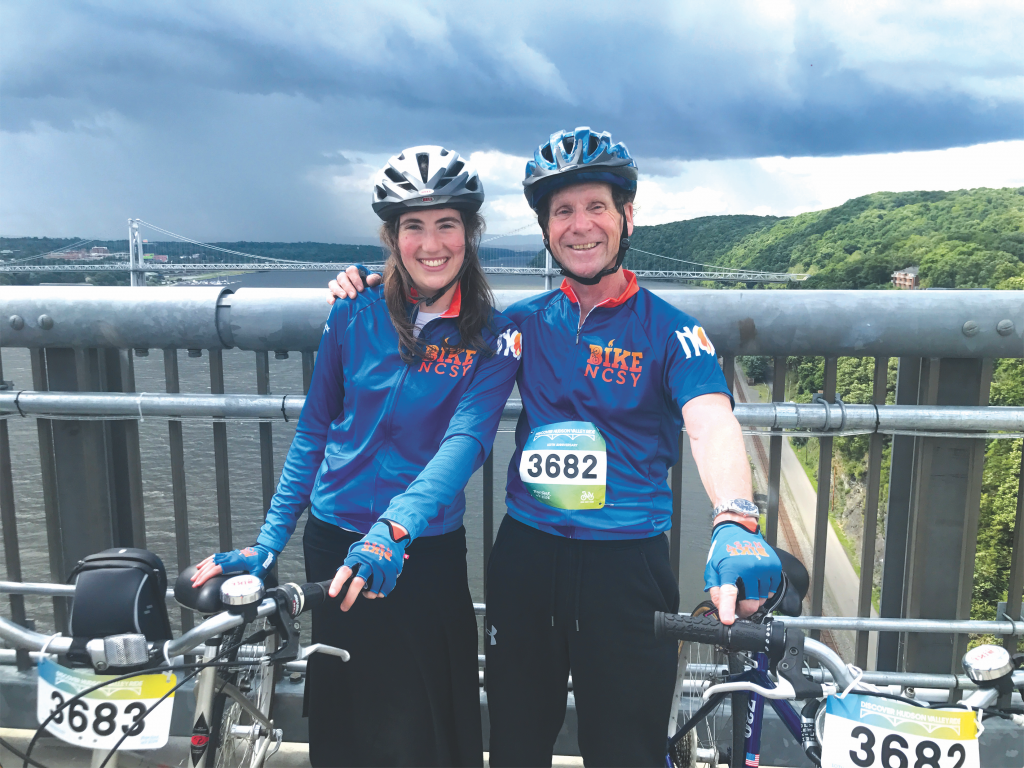 Chicago businessman Harvey L. Miller, former co-owner of Quill Corporation and sponsor of The Harvey L. Miller Family Foundation Midwest TJJ Bus, has taken a hands-on approach to philanthropy. Each year he meets with the Midwest NCSY teens on the TJJ bus he sponsors, taking a personal interest in their life-changing summer trip to Israel. TJJ is The Anne Samson Jerusalem Journey, NCSY’s Israel trip for public school kids and unaffiliated Jewish teens who want to explore their heritage in the Jewish homeland.

This past June, Miller shared a presentation with the teens on Israel’s rich past and promising future. He also asked them what they hope to gain from their Israel experience. “The young people of today are the future,” says Miller. “We must help them prepare for that future.” Thanks to his generous sponsorship, over the past three years Miller has provided nearly 120 teens with the chance to spend a transformative summer in Israel. 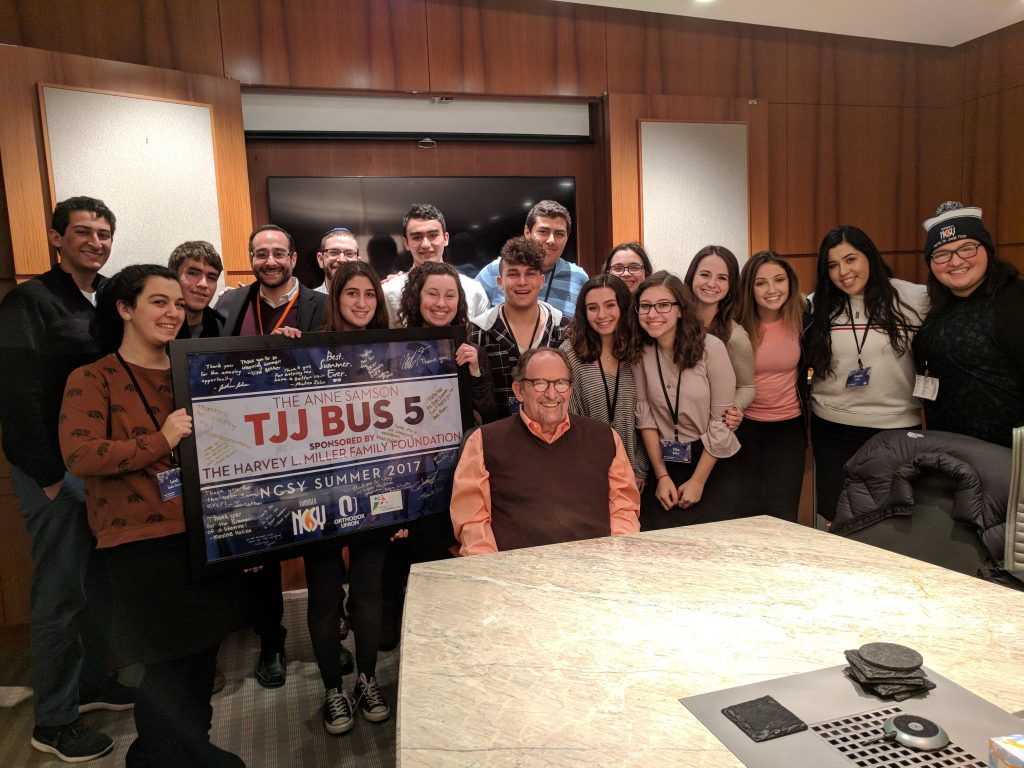 Midwest NCSYers from The Harvey L. Miller Family Foundation TJJ Bus meet with Harvey Miller to share their experiences on TJJ and present him with the sign bearing his foundation’s name that hung on the side of their bus.

Pedaling for a Purpose

Stretching their quads while enjoying getting into shape with their colleagues, OU employees raised $7,200 toward the Staff Campaign goal of $250,000 during the OU Staff Campaign Charity Ride. With separate rides for men and women, the events were held at SoulCycle, a workout studio in downtown Manhattan near OU headquarters.

“Supporting the ride was a way of honoring the exceptional staff who are the backbone of everything OU does to impact the lives of the Jewish people around the world,” said Joseph Aiken, Co-Founder, Malachite Capital Management, a generous supporter of the OU Staff Campaign Charity Ride. Alan Shamah, owner of the yoga supplies company Gaiam, donated yoga mats and blocks for the event. 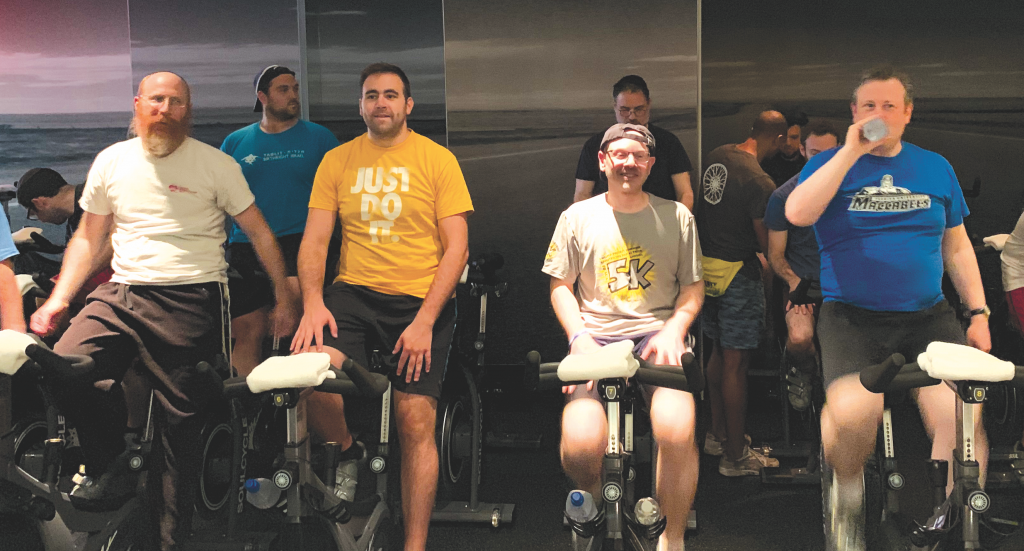 OU employees give back while getting in shape. Courtesy of Rebecca Esses

Yachad Fundraising Around the Country 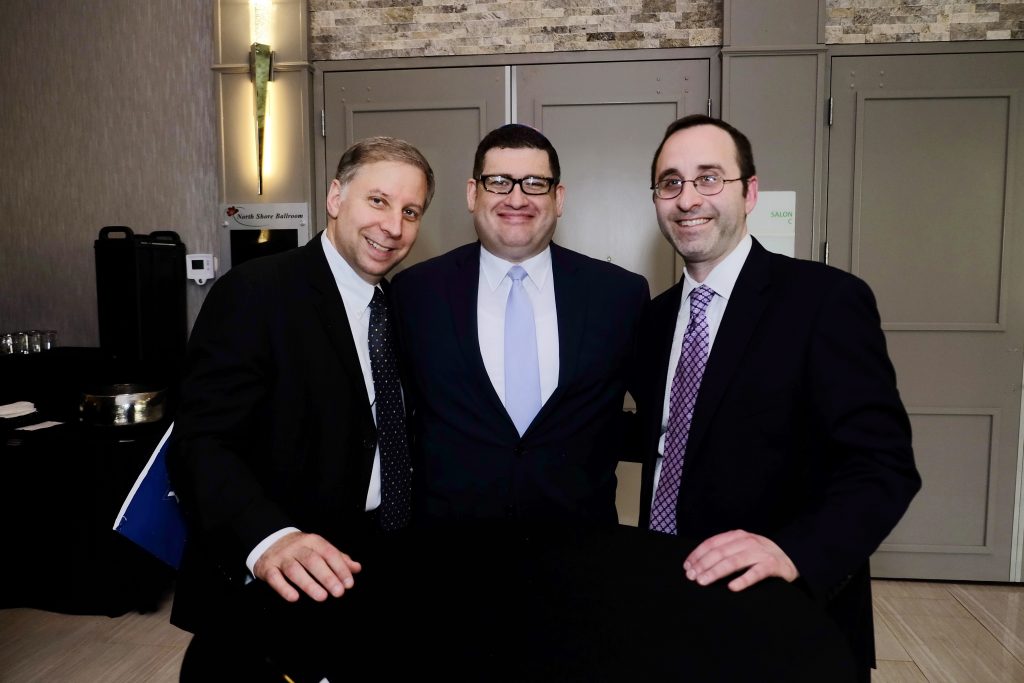 New York
Over 250 friends and supporters of New York Yachad celebrated thirty-five years of disabilities Inclusion in June with a gala evening at the Sephardic Temple in Cedarhurst, New York. Lauri and Lewis Barbanel were the guests of honor and Tani Sussman and The UPS Store accepted the Community Service award for Tani’s partnership with Yachad’s job development program. Martha and Howie Hershkovich were honored for their commitment to Yachad and their mission of Inclusion. Their daughter Sarala has attended Yachad summer and social recreational programs for close to ten years.

New England
Celebrating its remarkable growth, New England Yachad held its first Inclusive Gala Evening in June. Highlighting the successful launch of its Yachad Community Center in Brookline, Massachusetts, the event, held at the beautiful new facility, was attended by 330 guests and raised over $100,000. Yachad members and high school seniors who led Yachad clubs in their schools were honored at the Inclusive evening.

Prior to the Yom NCSY festivities in Park Ra’anana, over one hundred members of the OU Benefactor Circle, their families and OU leadership attended a special dinner with featured speaker Ayelet Shaked, the former Israeli Minister of Justice and current Chairwoman of the New Right party. For more photos of the Benefactor Circle Dinner, visit ou.org/philanthropy. 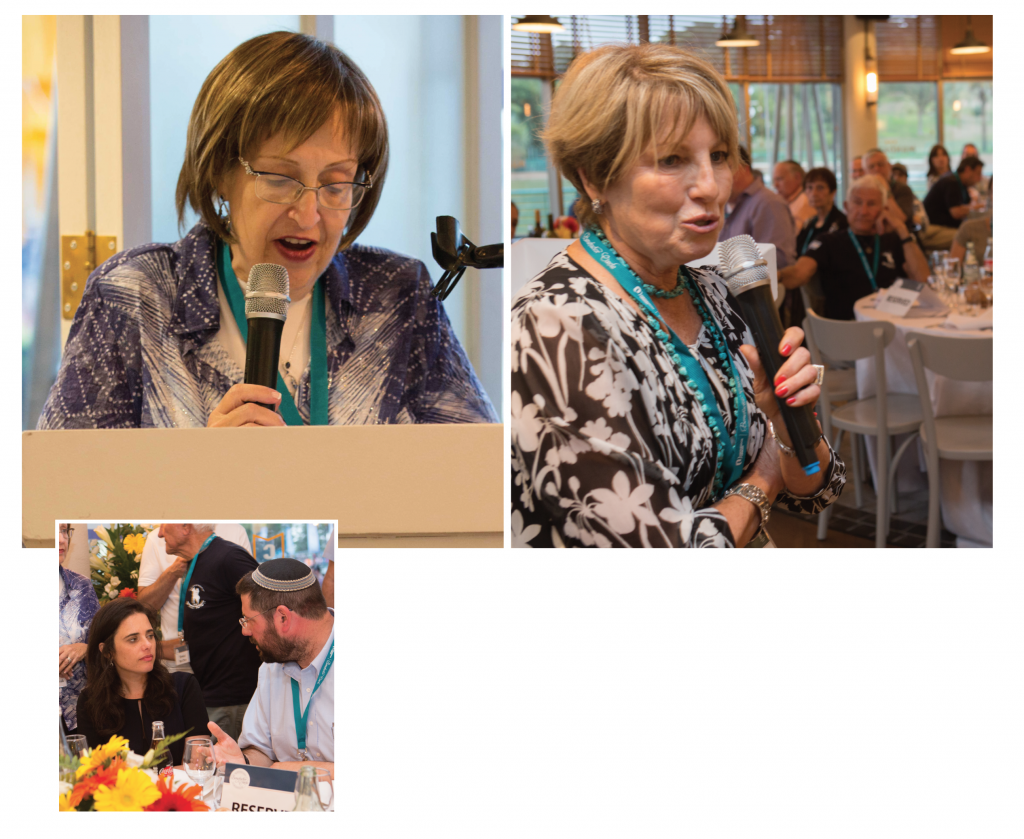 In June, OU West Coast celebrated its 50th Anniversary with a gala banquet honoring Rabbi Alan and Sandy Kalinsky. OU West Coast, which serves all the communities in the entire West Coast region, from Vancouver, Washington, to San Diego, California, to as far east as Denver, Colorado, has been under the leadership of Rabbi Kalinsky for more than three decades. The gala was attended by 300 guests and raised $400,000 to support OU West Coast’s varied and multifaceted programs. 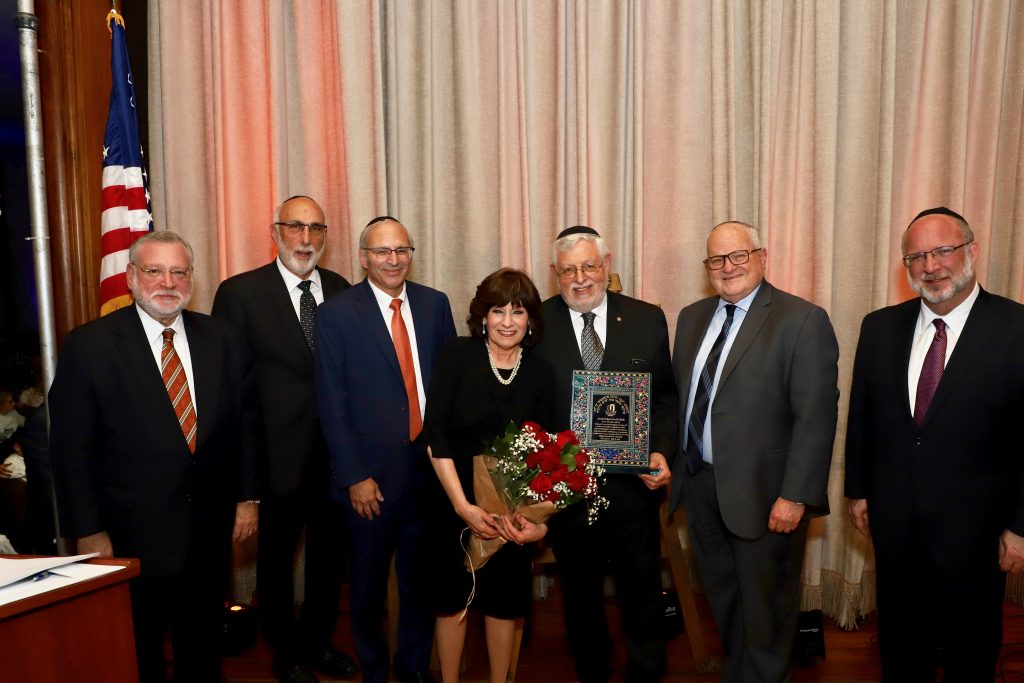 This past May, some fifty pulpit rabbis from across the country convened to learn from one another and share best practices at the 4th Annual Nathan and Louise Schwartz Rabbinic Retreat in Clayton, Georgia. Providing participants with professional development and access to experts not otherwise available, the rabbinic retreats, begun in 2016, are generously funded by The Nathan and Louise Schwartz Tzedakah Fund to honor the memory of Nathan and Louise Schwartz. Nathan Schwartz spent his life giving to others—whether it was caring for his cousins or contributing philanthropically to primarily Orthodox Jewish causes, he, together with Louise, shared a commitment to strengthening Orthodox Judaism in the South long before there was a significant Jewish community there.

“Thanks to the family’s generosity and dedication to Jewish life, our rabbis are able to collaborate, network and discuss vital communal issues, giving them the spiritual and emotional fortitude to continue in their holy work,” says Rabbi Naftali Herrmann, OU Southeast Regional Director, Community and Synagogue Services.

Retreat participants gather for a session with Rabbi Moshe Weinberger (center) during the three-day Rabbinic Retreat in Clayton, Georgia. Courtesy of Naftali Herrmann

The Refuge Partners with the OU

From The Zula, our drop-in center for teens in Jerusalem, to the Israel Free Spirit Birthright Recovery trip, the OU strives to help those in our community impacted by addiction and mental health issues. The Refuge-A Healing Place, a religion-friendly residential treatment facility for adults in Florida, recognized the OU’s dedication to helping our community and joined the OU’s Corporate Partnership Program to further these initiatives.

The Refuge specializes in treatment for trauma, PTSD, substance use disorders, mental health and eating disorders. This partnership enables The Refuge to increase brand awareness while simultaneously giving back to the community through philanthropic support of the OU’s multi-faceted and varied programs.

“Struggling with addiction, mental health and eating disorders can be overwhelming, and there are people in the Jewish community suffering in silence,” says Shea Kimbrough, Director of Business Development at The Refuge. “If this initiative can help even one person find the courage to ask for help then we have done our job.”

For information on how to become a corporate sponsor, contact Hannah Snitcovski at snitcovskih@ou.org.

To learn more about The Refuge, visit therefuge-ahealingplace.com.