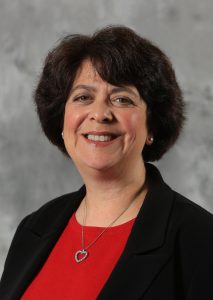 Connie Kanter, CEO of the Samis Foundation, has always been interested in new ways to engage with Judaism. A graduate of the Wharton School of the University of Pennsylvania, who also earned an MBA from the Booth School of the University of Chicago, Connie volunteered to serve on the boards of the Jewish Federation of Seattle and Seattle Hebrew Academy. Over the years, she slowly found herself, a Reform Jew, becoming more observant. Her future husband, Chuck Broches, attracted to the daily practice of Daf Yomi, was moving towards traditional Judaism as well. In time, they married and had two children, Simon and Mimi, whom they sent to Seattle Hebrew Academy. Connie worked in the financial sector, eventually becoming Chief Financial Officer for Seattle University.

After Chuck’s untimely passing, Connie decided to take a sabbatical and spend time with her children. Mimi had been on NCSY’s Next Step Israel Internships, a competitive internship program in Israel for teens. Connie joined Mimi for Yom NCSY, an event where thousands of participants in various NCSY programs join together for an evening of inspiration. “I welled up with emotion,” Connie recalled. “The spirit, the energy, it was remarkable. Everyone was so excited about what they were doing.”

Shortly after, in March 2019, Connie was appointed CEO of the Samis Foundation after serving on its board. The Samis Foundation funds Jewish education in Washington State, specifically causes in Israel and disaster relief globally and accepts grant proposals by invitation only. The Foundation works collaboratively with different organizations; Eli Genauer, who was both National Vice President of the OU as well as a board member of the Foundation, was instrumental in bringing the two organizations together.

“Connie is a gem of a person, and the Foundation has always been a partner and a friend of NCSY,” says Rabbi Steven Weil, Senior Managing Director of the OU.

“We have been looking at addressing the needs of teens in different ways, including teen engagement and funding Israel travel. NCSY, with its strong Israel programming and informal educational outreach, is a natural partner,” says Connie. The Foundation decided to provide stipends for teens to participate in The Anne Samson Jerusalem Journey (TJJ), an all-inclusive Israel summer trip geared towards public school students. These stipends lower the cost of the program and allow more families to participate.

“The young men and women who have participated in TJJ had a cathartic, life-changing experience,” says Rabbi Weil. “We could never have provided that without the largesse of the Samis Foundation.”

Connie is especially passionate about providing opportunities for teens to engage with Judaism in an informal way. Providing funding for NCSY staff to go into public schools through the Jewish Student Union (JSU) is another way to expose teens to various trips and programming.

Along with the NCSY programming, the Samis Foundation is also working with OU Israel, recognizing the challenges facing families who make aliyah with teens. The Foundation recognizes the role NCSY could play to help families make a smooth transition. This partnership brings together the Samis Foundation’s key elements of Israel philanthropy, along with immigration and a focus on teen engagement.

“I have great gratitude to be here at the Samis Foundation, working with such meaningful partners as the OU and NCSY. We are just thrilled to be part of it,” says Connie.

The Ultimate Trivia Experience
In lieu of a traditional fundraising dinner, Midwest NCSY flew in Scott Rogowsky, noted comedian and former host of the wildly popular mobile game show HQ Trivia, to preside over The Q, a live trivia experience. Rogowsky brought his trademark wit to the event, which was held in Skokie and drew 300 participants, including 100 new, young donors. Funds raised from the evening will be used to underwrite local NCSY programming and provide scholarships for summer trips to Israel. 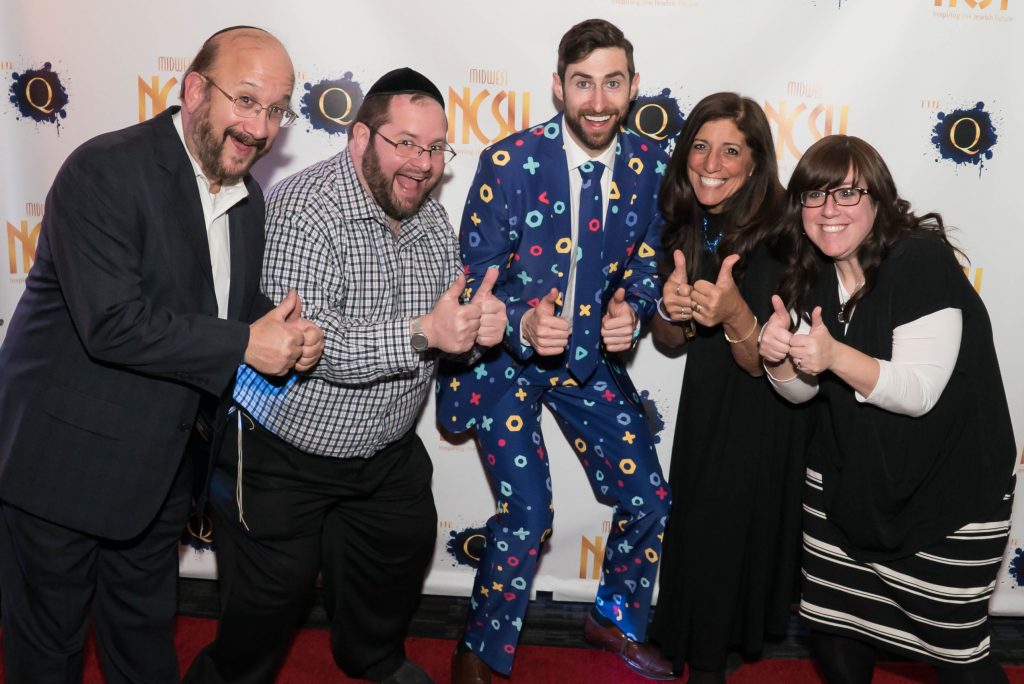 This past February, top professionals from the OU Institutional Advancement Team shared their tried-and-true tips for success while demystifying the fundraising process for members of the OU’s Impact Accelerator. Created to support new ventures addressing communal challenges, the Impact Accelerator provides early-stage funding, mentorship and training for the selected group of nonprofit leaders.

The OU Impact Accelerator’s vision is to serve as a hub for Jewish innovation within the Orthodox world.” —Jenna Beltser, Founding Director

Held at the OU’s New York offices, the three-day fundraising seminar focused on the basics of fundraising, a critical ingredient for growing nonprofit businesses.

“We needed to learn how to close a gift,” says Reva Judas, who founded NechamaComfort more than thirty years ago to support families of all Jewish backgrounds through the trauma of miscarriage, stillbirth and infant loss, but only recently incorporated it as a nonprofit. “The fundraising seminar taught us how to use our passion for what we do to solicit the funding we need.” 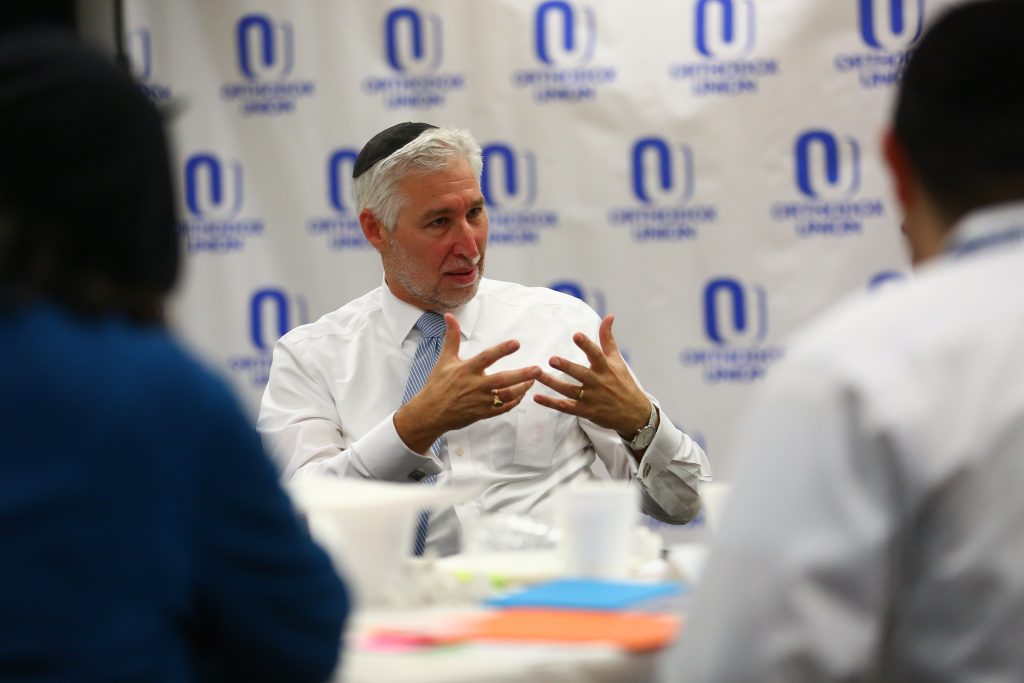 OU, in Partnership With Kedem, Sends $200k in Grants to Food Pantries for Pesach
This past March saw the launch of Kosher Food Lifeline (KFL), a new OU department to help existing food pantries, Tomchei Shabbos programs and related social service agencies throughout the United States provide nutritious kosher food to Jews in need. The department’s inaugural program was conducted in partnership with Kedem, a leader in the specialty food world with a focus on kosher, gluten-free and all-natural foods. Utilizing the OU’s annual Maot Chitim fundraiser, KFL directed a total of $200,000 in grants during the Passover season to fifty-three food pantries across the country, who used these funds exclusively for the purchase and shipment of discounted Kosher-for-Passover food items from Kedem. This enabled pantries to provide their constituents with free Passover foods in advance of the holiday.

“This is the first time a national program, at this scale, has addressed the needs of kosher food pantries,” says Allison Deal, founding director of KFL. “We aim to increase efficiency, eliminate waste, bring prices down, and help these agencies provide more nutritious, protein-rich kosher food to those who need it most.”

“Financial strains within the Jewish community cannot be understated,” said OU Executive Vice President Allen Fagin. “As the OU tackles affordability issues on a number of fronts, we recognize the thousands of American Jews who struggle each day to put nutritious kosher food on the table. We must work together to support the remarkable work of kosher food pantries, Tomchei Shabbos and other organizations that help to fill these needs. We thank Kedem for generously partnering with us on this critical program.” 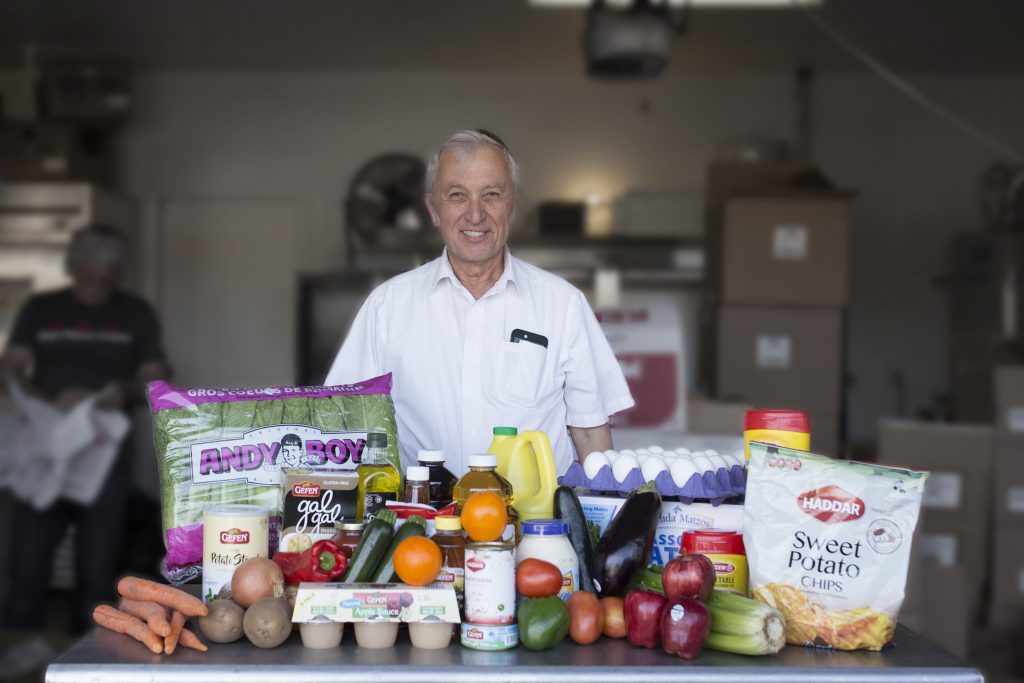 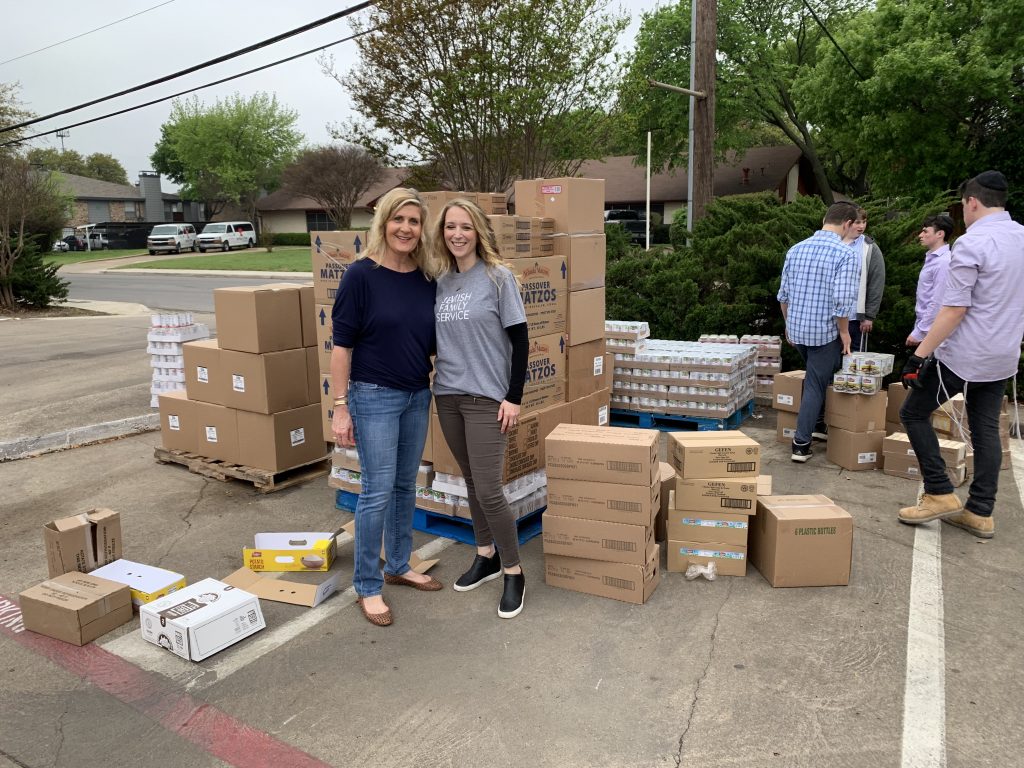 For the day, ReSurf donated new surfboards and brought in a world-renowned street artist to work with the youth to paint the boards and launch the very first-ever MLK Surf Team. “It’s so important for Jewish teens to find purpose and meaning in their lives,” says ReSurf Founder Oran Bendelstein, who has a passion for surfing and for Jewish outreach. 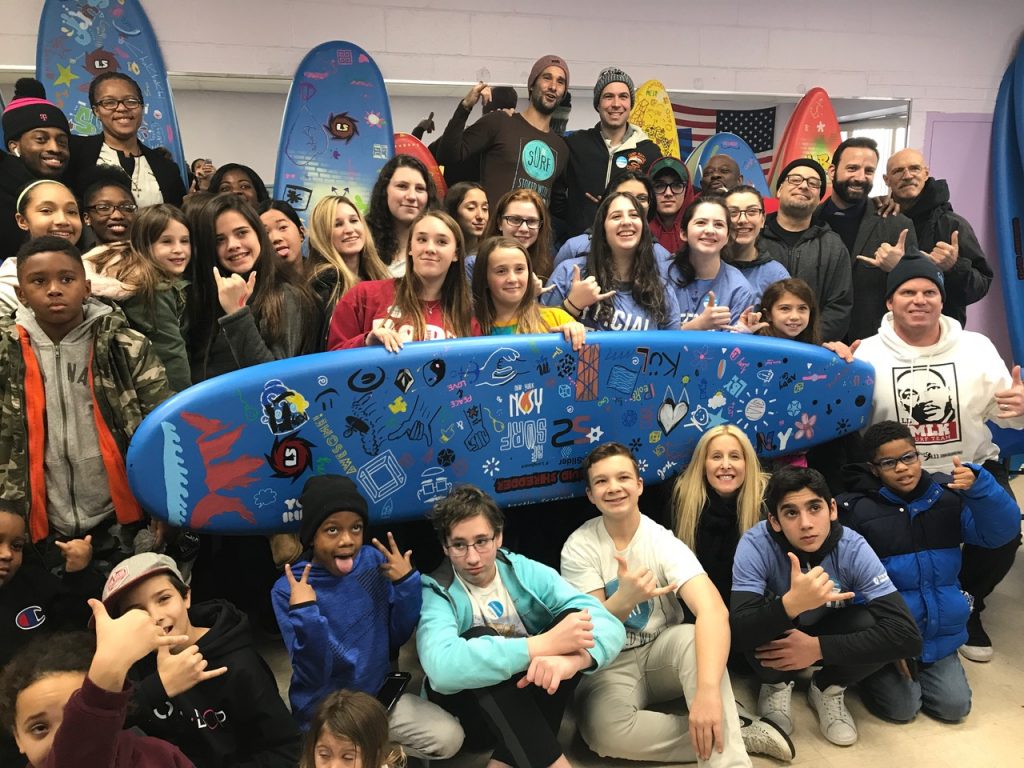 Teens from New York NCSY’s ReSurf club and the Long Beach Martin Luther King Center pose with the surfboards they painted as part of the UJA-Federation of New York’s MLK Day of Service. Photo: Josh Weinberg

Over this past year, student-led crowdfunding campaigns on eight OU-JLIC campuses have collectively raised over $155,000 to date for OU-JLIC. Campaigns included Brooklyn College’s Fifth Annual Shushan Auction, Cornell’s Dodgeball Tournament, and the Annual Toppings Fundraiser involving four West Coast universities. Now in its nineteenth year, OU-JLIC fosters an ongoing commitment to the Torah lifestyle by providing a warm and welcoming home for Jewish students on campus. Its network of Torah Educators are on more than twenty campuses in the US, Canada and Israel.

The NCSY Gala provided a powerful glimpse into the most effective Jewish teen engagement organization in the world.” —Jeff Korbman, NCSY Director of Development 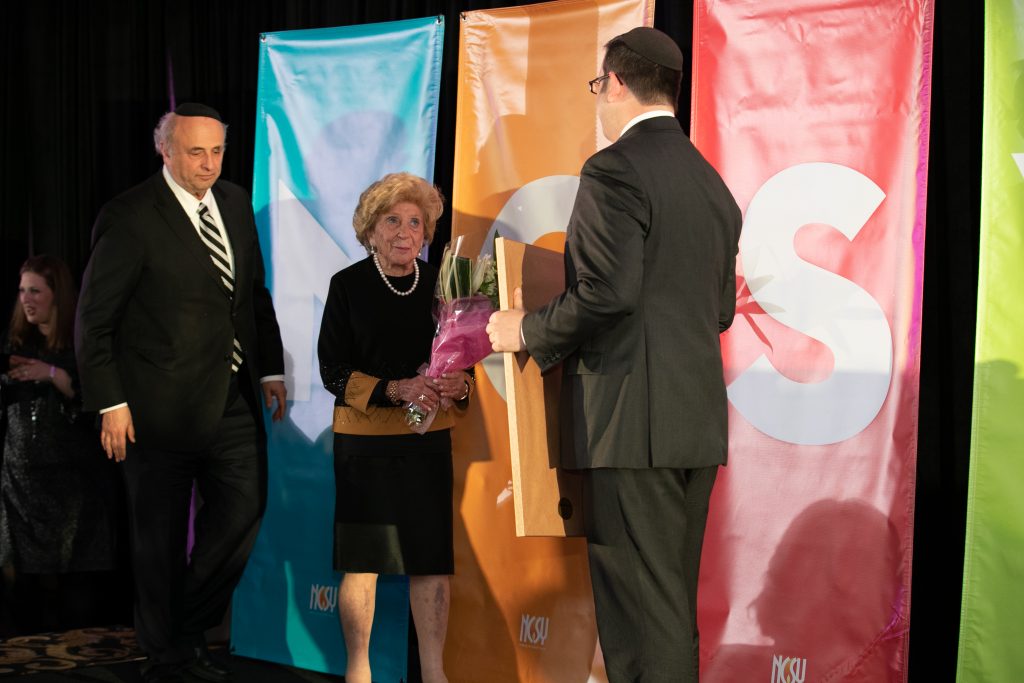 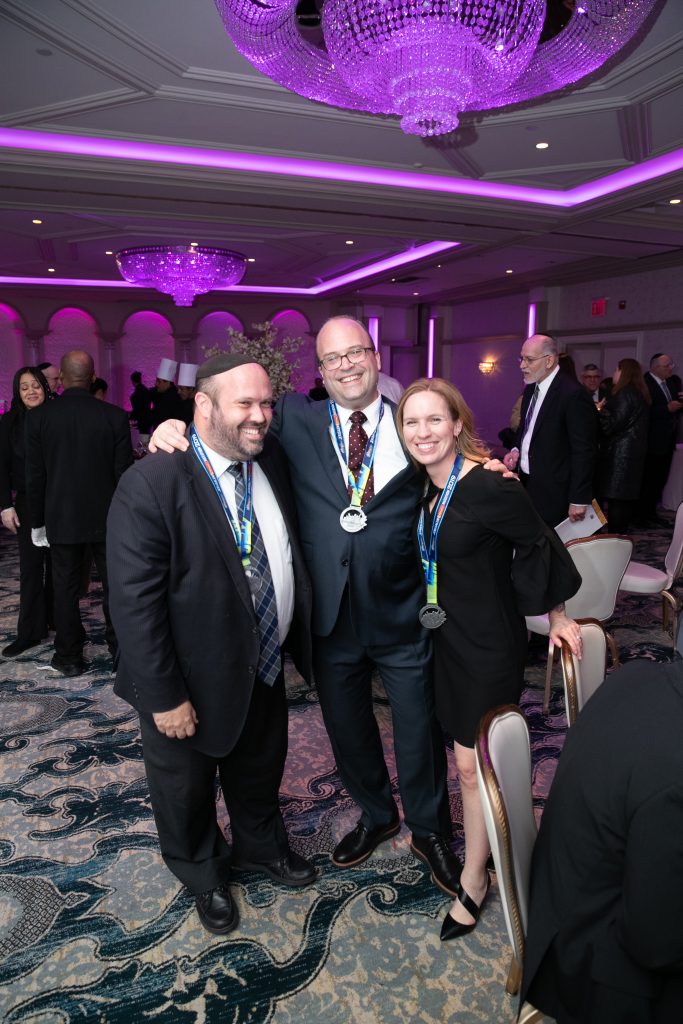 Distinguished Alumni Awardees Rabbi Elie and Dr. Naama Weinstock celebrate at the NCSY Gala with Rabbi Elie’s brother, Rabbi Yosef Weinstock (left). The Weinstocks both participated in NCSY as teenagers, and Rabbi Elie served in various professional capacities in NCSY early on in his career. 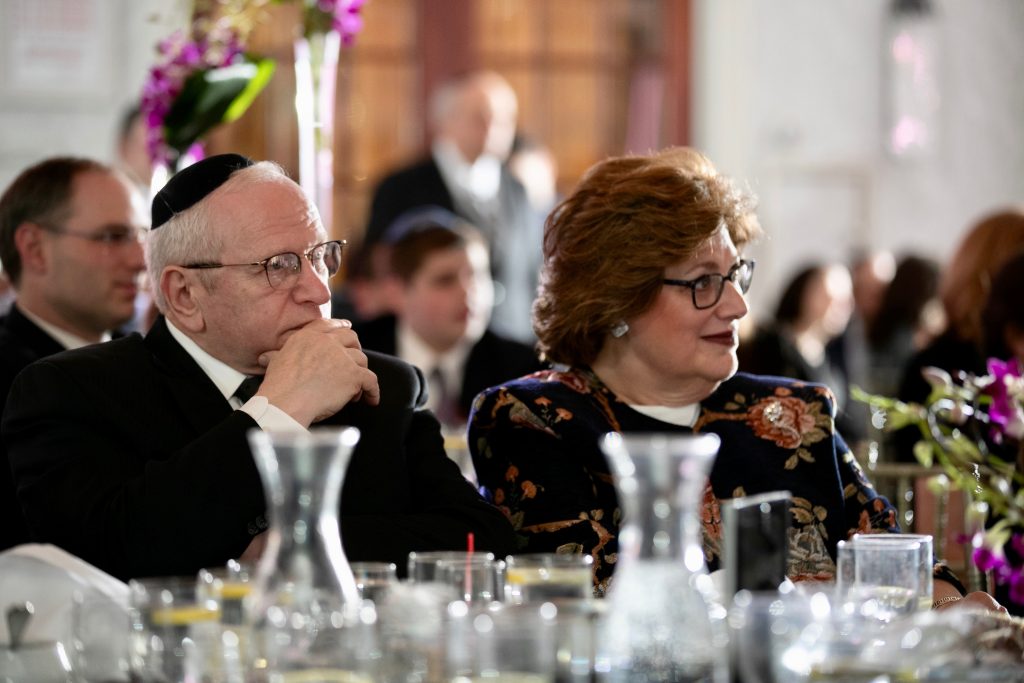 Guests of Honor Genie and Stephen Savitsky enjoying the evening. The Savitskys were recognized for the decades of impact they have made transforming people’s lives, as well as setting a vision for organizational change, especially during the time that Stephen was both the Chairman and President of the OU. 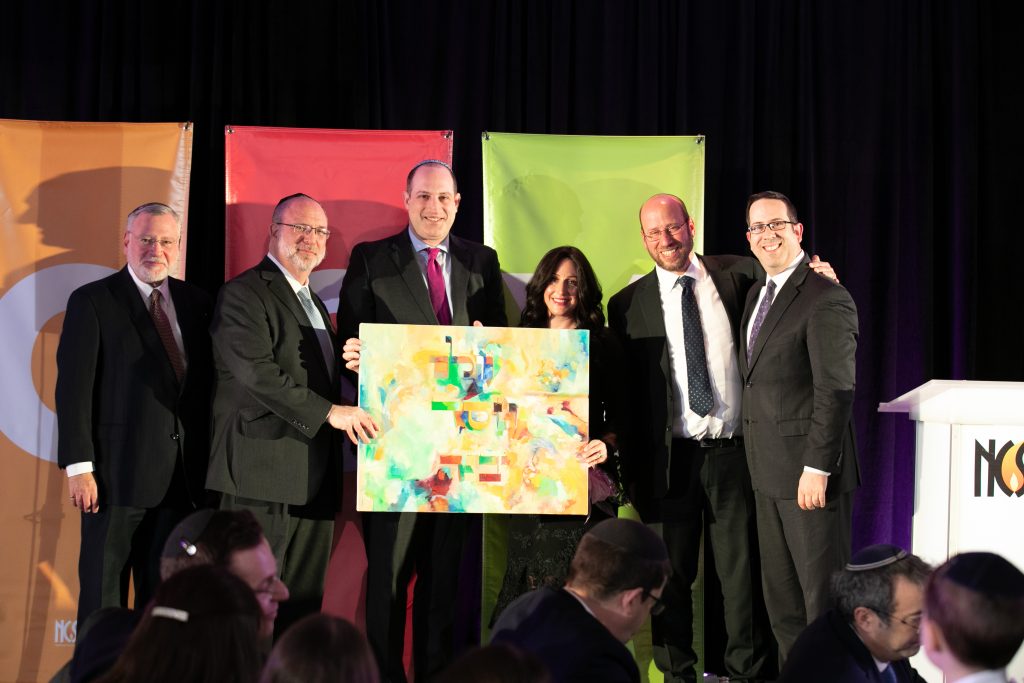