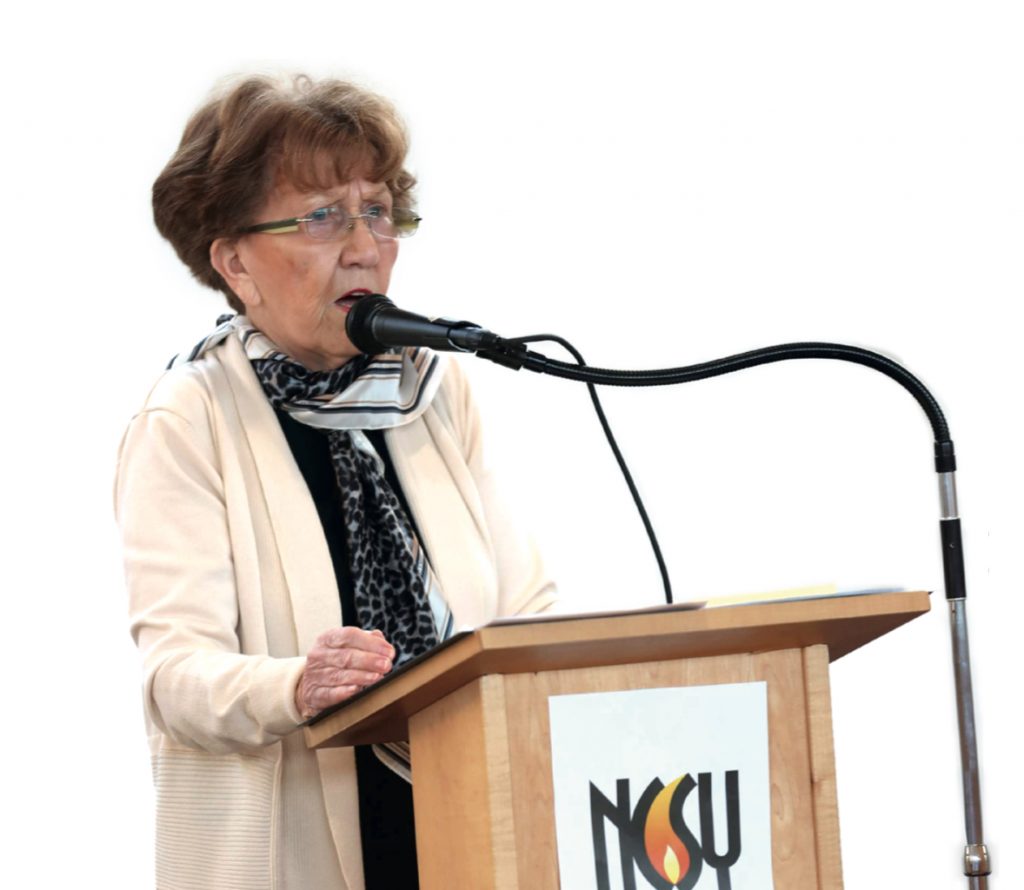 Eve Gordon-Ramek was born and raised in Oakland, California, one of five children in an active Jewish household. She fondly remembers her father, an immigrant from Ukraine, going to shul and giving tzedakah, anchoring their home life in Jewish tradition.

“What I recall most was his fervent hope that we never assimilate,” says Eve, a challenge given local demographics in those days. There were no Jewish day schools, and the Gordon siblings attended public school with just a few other Jewish students.

Eve was a member of B’nai Brith before attending the University of California, Berkeley and then Hadassah after she married at the age of nineteen. Yet once she divorced, she focused on raising her three sons and supporting them through a career in real estate investment. She also began buying commercial properties, building her own portfolio.

It was when she married Henry Ramek, whom she had known her entire life—he was the founder and owner of Oakland Kosher Foods—that she returned to the observant world of her father. Henry was well-respected, beloved and passionate about his Judaism. The couple’s world revolved around their Orthodox shul, Beth Jacob Congregation, where Henry frequently led davening. They were married sixteen years before Henry passed away in 2014.

An Auschwitz survivor, Henry often spoke to groups throughout the East Bay area, and Eve was always by his side. She learned a great deal from him and took to heart his belief that children are the key to the future of the Jewish people.

“Eve launched an era of growth and change for our chapter and really for the entire East Bay area.”

“The more I heard him tell his story, the more it influenced me once I was in a position to be philanthropic,” reflects Eve, who has been a devoted supporter of the two local Jewish schools— Oakland Hebrew Day School and Contra Costa Jewish Day School. “After losing so many of our people during the Holocaust, I knew we could not afford to lose any more to assimilation.”

Eve treasured the way children were drawn to Henry’s warmth and charisma, and how he would encourage them to learn as much as possible about their Jewish heritage. Rabbi Akiva Naiman, NCSY’s Northern California East Bay Chapter Director, reminds Eve of her husband in that way. “He brings Judaism to life and makes it fun. It takes a special personality to do that well.”

So when Rabbi Naiman approached her about sponsoring the chapter’s 2019 Ski-Baton in Henry’s memory, Eve jumped at the opportunity.

Eve, who calls NCSY “the most wonderful program you can imagine,” was thrilled to see off a group of sixty teens departing by coach bus for Lake Tahoe months later, their ski gear and Shabbat attire in tow. They were riveted as she described Henry’s story of survival and his efforts to hunt down Nazis after the war. It was a meaningful start to what proved to be a life-changing weekend.

She sponsored the Ski-Baton again in January 2020. But when she arrived to address the enthusiastic crowd, she was amazed to find it had more than doubled in size. “The visual alone—we now had three buses and a van! —was powerful,” Rabbi Naiman says, “an increase that was 100 percent a credit to Eve’s investment in these kids.”

With her signature warmth, Eve describes looking in their eyes and seeing the teens’ happiness—to be with other Jewish kids in a Jewish environment, maybe for the first time. “I knew then that I’d done the right thing,” she notes.

Rabbi Naiman is quick to add that the impact of Eve’s generosity goes far beyond the Ski-Baton. “She launched an era of growth and change for our chapter and really for the entire East Bay area.”

“This is why I give,” Eve says. “This memory of a fun and impactful weekend, this good feeling about being Jewish, will stick with these kids for a lifetime.”