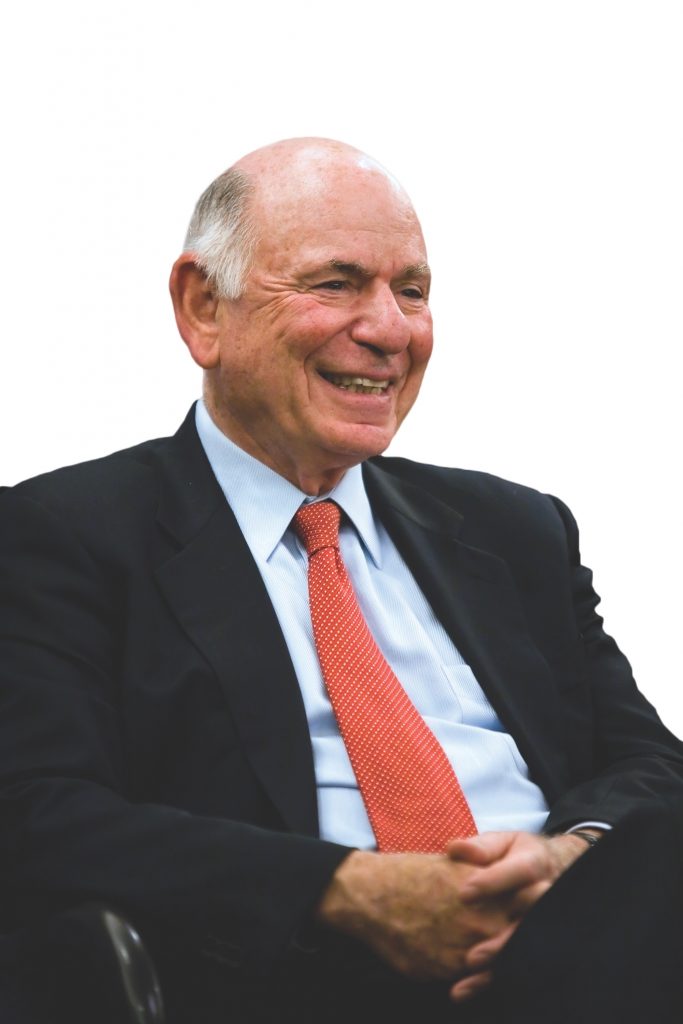 Growing up in Boston, Mike Leven was always active in Jewish life. He attended shul and Hebrew school, spent summers at Jewish camp, and played ball at the YMHA. His parents worked hard, the family lived modestly and tzedakah was essential to who they were as Jews.

“I learned from the pushkes my grandparents kept on the television that it isn’t always how much we give that matters,” he recalls. “Sometimes, it’s just the giving itself.”

Mike remained Jewishly active on campus as an undergraduate at Tufts University and then as a graduate student at Boston University. But graduation began what he calls “a forty-year gap” in his Jewish communal life. He and Andrea, his wife of fifty-nine years, raised their three sons in Atlanta, where they focused on other causes.

A visionary businessman, Mike’s prominent career in the hospitality industry included the launch of the Holiday Inn Express brand and the reorganization of Days Inn of America, growing it from a regional chain to one of the largest hotel organizations in the world. Last year, he ended his tenure as the Chairman and Chief Executive of Georgia Aquarium to devote more time to philanthropic endeavors. In the past, he served as President and COO of the Las Vegas Sands Corporation, Chairman and CEO of US Franchise Systems, President and CEO of Holiday Inn Worldwide and President of Days Inn of America. Mike’s book about his career, You Can’t Do It Yourself: How Commitment to Others Leads to Personal Prosperity, is forthcoming from Forbes this fall.

Eventually, however, Mike returned to his roots. “It’s been a very expensive journey back,” he quips. Though he is not observant, he is a shul member and believes that Orthodoxy represents the foundation—and future—of the Jewish people. He serves on The Marcus Foundation board, through which he is active in Taglit Birthright Israel. He also supports local institutions, including the Atlanta Scholars Kollel and Chabad, as well as other charitable causes in Florida, where he and Andrea now reside.

“Mike saw immediately that TJJ is a quantum leap for these teens, who have little, if any, prior connection to Judaism. It launches their journey as the next generation of Jewish leaders.” —Evan Levitt, Regional Director of Special Projects, Southern NCSY

Mike, who steers much of his philanthropy toward organizations that help sustain the Jewish people and the State of Israel, approached NCSY looking to invest in the future. A few years ago, he made a generous commitment to NCSY’s The Anne Samson Jerusalem Journey (TJJ) summer program, which provides an immersive, life-changing trip to Israel for Jewish teens who attend public and secular private schools.

“Mike saw immediately that TJJ is a quantum leap for these teens, who have little, if any, prior connection to Judaism. It launches their journey as the next generation of Jewish leaders,” says Evan Levitt, Regional Director of Special Projects, Southern NCSY.

While on the trip, TJJ participants send postcards to Mike, and he hosts teens from the Florida contingent in his community when they get back. He wants to hear directly from them not only about their Israel experience, but also about how they are committing to Jewish life in their communities once they return home.

“Mike’s passionate approach to helping NCSY do what is necessary to sustain Jewish life is both unparalleled and inspiring,” says Evan. He lauds Mike “for wanting to see firsthand how the kids are more involved after TJJ, through NCSY programming at school, for example. It’s the return on his investment.”

Beyond his own giving, Mike has launched a national initiative called the Jewish Future Pledge (JFP) that he hopes will inspire a uniquely Jewish philanthropic legacy. With trillions of dollars in wealth set to transfer from his generation to the next over the coming twenty-five years, the JFP encourages individuals to direct a portion of their estate to organizations and philanthropies that help sustain the Jewish people and the State of Israel.

Mike also wants teens to sign the Jewish Youth Pledge, which asks them to commit to supporting the Jewish community through their friendships and attendance at Jewish programs.

“My hope is that they’ll find a way to involve themselves [in Jewish life] long before they can be philanthropic. That’s where it starts—with critical programs like NCSY,” he explains.