As a Jewish educator who teaches in multiple venues, Stacey Goldman aims to inspire. Yet it was only after recording her first shiur for the OU Women’s Initiative (WI) that she decided to bring more of her own teaching online. This experience would ultimately transform how she shares Torah with a wide audience, and it would influence her philanthropy as well. 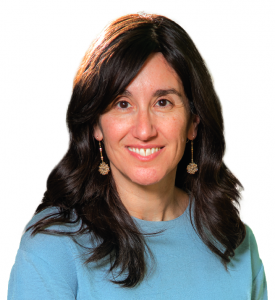 A Barnard graduate, Stacey met her husband Amir during their junior year abroad in Israel, where they were inspired to become observant. She was also deeply shaped by her advanced Torah studies at Nishmat—The Jeanie Schottenstein Center for Advanced Torah Study for Women in Jerusalem, which remains one of her philanthropic priorities.

Eventually, she and Amir settled in Lower Merion, Pennsylvania, where they have raised their five sons, ages fourteen to twenty-four. Stacey teaches Tanach at Philadelphia’s Kohelet Yeshiva High School. She also serves as a yoetzet halachah for both the Greater Philadelphia area and the Las Vegas community, where her in-laws reside.

The couple’s philanthropy focuses on education. A tireless advocate for Pennsylvania’s Jewish day schools, Amir sits on the OU’s Teach Coalition National Advisory Committee, co-chairs Teach PA, Teach Coalition’s Pennsylvania branch, and has contributed to various programs at the OU. He and Stacey have helped grant education access to children in-need at both Jewish and non-Jewish schools in Greater Philadelphia. They also support the local Jewish Family and Children’s Services and the Jewish Federation, where Amir chairs the Endowment Committee, and were instrumental in building the Lower Merion mikvah. “They are exceptionally committed to supporting the growth and vitality of this community,” says Rebbetzin Dr. Adina Shmidman, director of the WI and wife of the Lower Merion Synagogue’s mora d’atra Rabbi Avraham Shmidman. “Stacey is eager to help,” she adds. “She is smart and well-liked and a wonderful teacher.”

Stacey embraced the chance to create a video for the WI’s Rosh Chodesh virtual learning series when Rebbetzin Shmidman approached her. Because of the Covid outbreak, Stacey had to record it herself at home, a humbling experience that swayed her to invest generously in the WI’s initiatives a year later.

Meanwhile, Stacey began recording her popular one-minute parashah talks at Kohelet and sharing the videos on YUTorah and social media. “I put myself out there to inspire others,” she says. Only when a friend critiqued them—“great content, unprofessional presentation”—did Stacey realize she had to do something about it.

“I knew that my Torah videos would be more effective if I improved things like lighting and Zoom backgrounds,” she reflects. “Still, bringing in a coach was an expensive investment I wasn’t ready to make.”

With a growing number of Jewish women educators, scholars, and lay leaders pursuing speaking opportunities, the WI recognized the need to provide them with targeted professional development. It launched “The Art of Speaking” earlier this year, an advanced seminar covering everything from building a unique speaking style to mastering the virtual presentation.

“Nothing like it exists within the Orthodox world here in North America,” Rebbetzin Shmidman adds.

Stacey was among the seminar’s first cohort of sixty participants, an experience that sold that her on the necessity of professional coaching. “It revolutionized how I do what I do,” she enthuses, adding that a spike in followers quantified the impact of the changes she had made to her presentations.

Soon after, Stacey decided to fund the WI’s 2022 “Art of Speaking” cohort. “I am honored that this gift will enable so many klei kodesh women [those involved in teaching Torah] to improve themselves in this area as they continue spreading Torah in the world,” she says.

Rebbetzin Shmidman appreciates the opportunity Stacey is creating. “Her generosity will provide training to a wide group of speakers, each of whom reaches an audience of hundreds, if not thousands. It’s a privilege to work with her on setting other women up for success.”

And that, of course, is priceless.