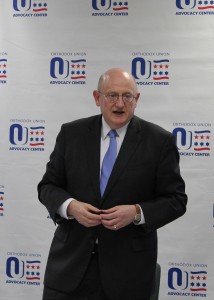 This past February, Ira Forman, US Special Envoy to Monitor and Combat Anti-Semitism, spoke to Orthodox Union leaders about the rise of global anti-Semitism.

The event was organized by the OU Advocacy Center, the nonpartisan public policy arm of the OU. Forman, the former director of the National Jewish Democratic Council, delivered his talk at the OU headquarters in downtown Manhattan.

“It was an honor to have Ira Forman join us at the OU to brief our leadership on the steps being taken by the Administration to combat the growing scourge of anti-Semitism in Europe,” says OU Executive Vice President Allen I. Fagin. “We are grateful that the United States government has seen fit to create the position of Special Envoy to Monitor and Combat Anti-Semitism as a tangible step in recognizing and combating anti-Semitism wherever it rears its ugly head. It is incumbent upon each of us to remain eternally vigilant and to do everything within our power to protect the safety and religious freedom of our brethren everywhere.”