It’s a weekday morning and Rabbi Chaim Loike, rabbinic coordinator for the Orthodox Union and chief bird expert, is packing up his van. Inside are boxes of live birds—ducks, quails, parrots and parakeets—that were delivered to him via mail the day before. After a quick stop at the pet store where Rabbi Loike picks up fish tanks for the birds and supplies, he brings them to the school he is scheduled to visit.

“We go to anyone who requests us,” explains Rabbi Loike, who typically visits a different school each month and has a long waiting list of schools that have requested him. “The kids are usually really interested. They ask, ‘Is that the quail they ate in the midbar?’ They’re interested in the birds that were given as korbanot—the doves and the pigeons; they’re shocked [when they see] what they learn about in school is coming to life!”

Not only is the OU the largest and most trusted kosher certification agency in the world, but the organization provides a dazzling array of educational courses, classes and lectures on the topic of kosher to the Jewish public, thanks to a grant from the Harry H. Beren Foundation of New Jersey and the encouragement and guidance of Rabbi Menachem Genack, CEO of OU Kosher and rabbinic administrator, and Rabbi Moshe Elefant, COO of OU Kosher and executive rabbinic coordinator. 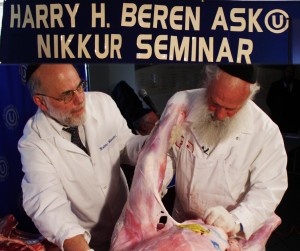 As part of the Harry H. Beren ASK OU Outreach Program, OU rabbis visit yeshivot, kollels and communities to teach about the intricacies of keeping kosher.

“We believe that the more people know about kashrut, the more we strengthen kashrut worldwide,” explains Rabbi Yosef Grossman, OU’s senior educational rabbinic coordinator. “The OU is a service organization. Besides providing kosher food, part of the mission of OU Kosher is to provide kosher education.” 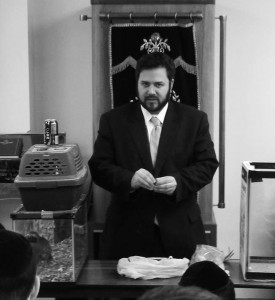 ASK OU (Advanced Seminars in Kashrut) began in 1996 as a three-week mashgiach training program for semichah and kollel students as well as a one-week learning program for community members and members of kosher vaads. As interest in the programs increased, the division, with the support of former OU President Dr. Simcha Katz, began looking to expand. Eventually, the OU launched the Harry H. Beren ASK OU Outreach program for kollels and communities.

“Instead of people only coming to us for internships and training, we go to them,” says Rabbi Grossman.

In 2006, the OU also began bringing kashrut courses to schools under the OU Kosher Coming program. OU rabbinic field coordinators began offering the OU’s kosher expertise to students around the world, including students at elementary schools, high schools and colleges. Each presentation was tailored to the specific interests of the group. OU Kosher Coming was recently folded into the activities of the ASK OU program.

“The OU has delivered presentations to schools and institutions across the entire spectrum of Orthodoxy, from Chassidic to Modern Orthodox,” says Rabbi Eli Eleff, consumer relations administrator for the OU and rabbinic coordinator, who now runs the ASK OU Outreach programs for high schools and elementary schools.

ASK OU also began offering classes via Skype to institutions as far away as kollels in Australia. It also produces DVDs, magazines and manuals about the kashrut process, including the popular Daf HaKashrus newsletter.

“The OU believes in transparency,” says Rabbi Grossman. “We believe that an educated consumer is our best customer. We try to strengthen kashrut through accurate knowledge.”

To find out more information about ASK OU and how to bring it to your school, yeshivah, kollel or community, e-mail koshereducation@ou.org.