Supporting Innovation
Following the success of its inaugural year, the OU’s Impact Accelerator—created in 2018 to identify and invest in ventures addressing current and future Jewish communal interests—is looking for its second cohort.

Candidates for the program are Jewish nonprofit entrepreneurs who cater to the North American Jewish community. Those selected for the cohort will be paired with experienced professional mentors, attend coaching and strategy seminars hosted at the OU’s New York headquarters, and will be awarded up to $25,000 each.

“The mission of our program is to transform the landscape of the Jewish future by building on our history of innovation and leveraging the entrepreneurial nature of this generation,” said OU Impact Accelerator Founding Director Jenna Beltser.

Where Are They Now?
Accomplishments of the first OU Impact Accelerator cohort include:

– Imadi was accepted to the Good Counsel Cohort for 2019

– NechamaComfort was recognized by the Russell Berrie Foundation with the “Making a Difference”  Honorable Mention Award and Grant, and received Walmart’s “Giving Back to the Community” Award

– TorahAnytime launched a new WhatsApp broadcast with thousands of users 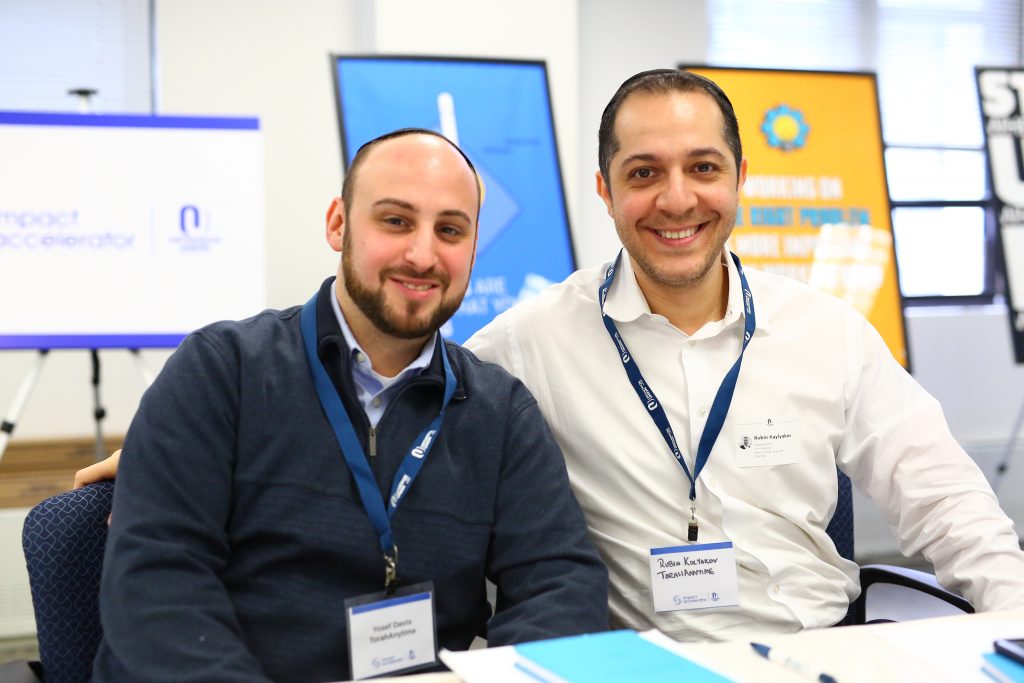 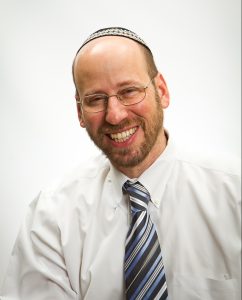 Building on over fifteen years of successful relief missions, NCSY launched a national program this past May to send teen volunteers to assist after natural disasters, teaching the value of chesed and empowering the teens to contribute to something larger than themselves.

Called Relief Missions, the program is under the direction of Rabbi Ethan Katz, who served as the New Jersey NCSY Regional Director since 2013. Under Rabbi Katz’s leadership, New Jersey NCSY partnered with local schools and communities to run dozens of missions in areas still recovering from major disasters, such as New Orleans, Louisiana, Houston, Texas and Puerto Rico. Rabbi Katz will now oversee the expansion of the program on a national scale, increasing the number of annual missions from twenty to thirty, and broadening the volunteer base to include all eleven NCSY regions in North America. 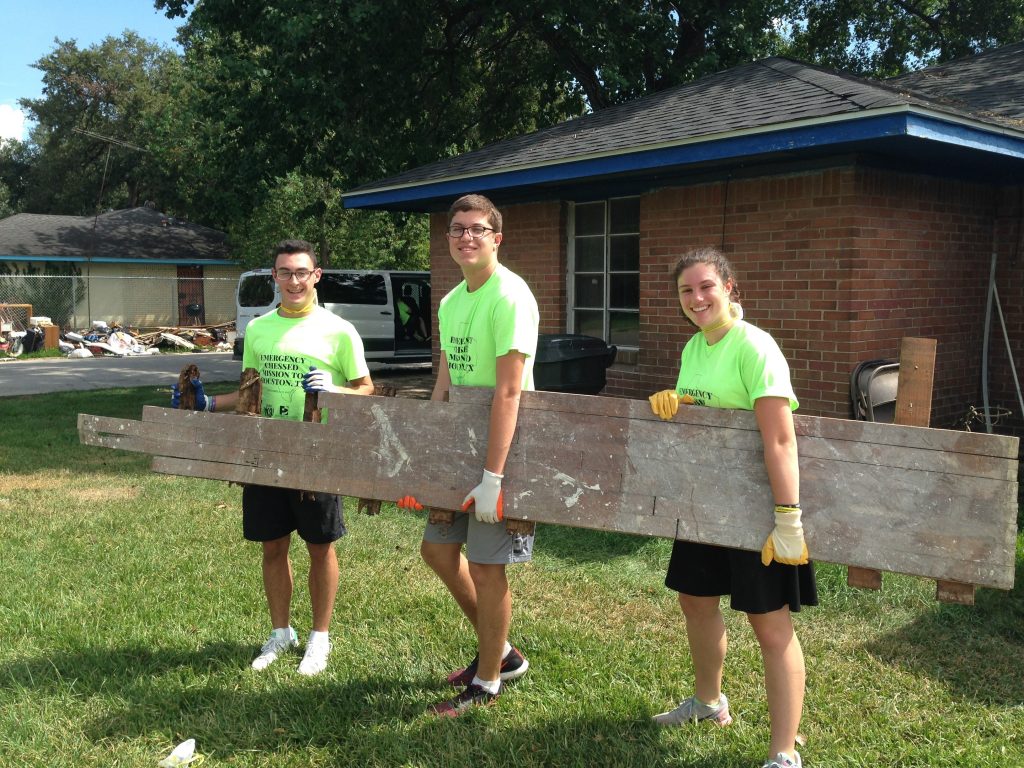 NCSYers from New Jersey assist in cleanup in Houston, Texas, after Hurricane Harvey.

Celebrating Together at Yom NCSY

More than 2,500 Jewish teens, staff and guests from twenty-nine states, Canada, Israel and the United Kingdom participating in fourteen NCSY summer programs converged on Park Ra’anana in July to enjoy live musical performances at Yom NCSY. At the Yom NCSY celebration, a United Hatzalah Ambucycle, dedicated by NCSY Summer through its seventy-two-hour fundraiser, was unveiled. 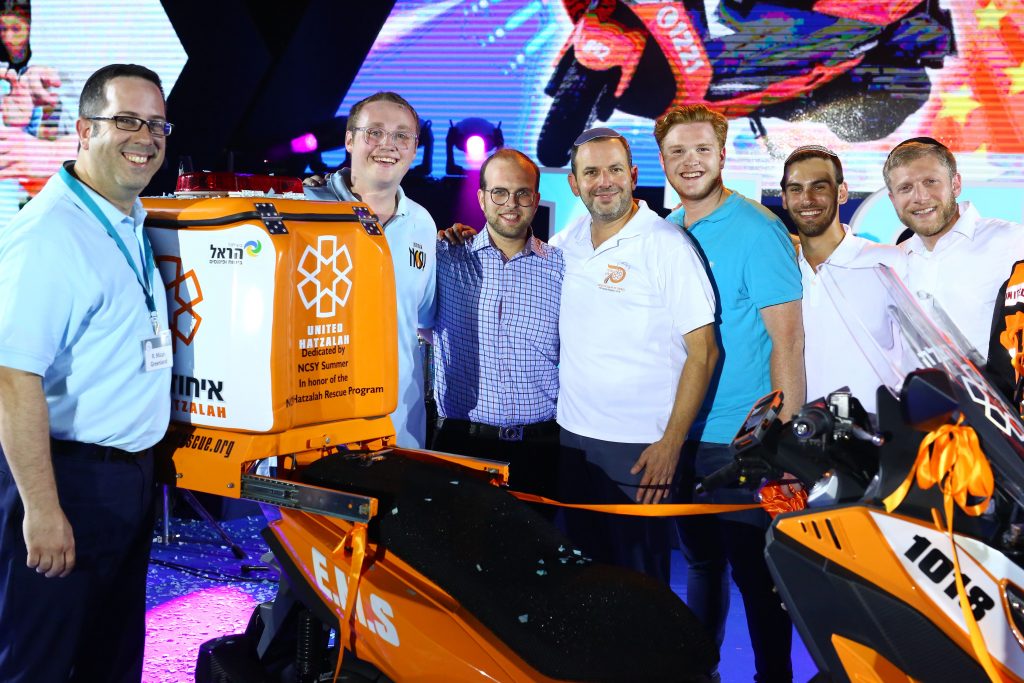 Some twenty rabbis, nonprofit professionals, and community lay leaders from across North America convened at Beth Jacob Congregation in Beverly Hills, California, this past July for the first-ever Visionary Forum. The brainchild of OU Western States Regional Director Solly Hess and Director of Advancement at Southern California Yeshiva High School Rabbi Adam Simon, the Forum taught participants to impact both their local and global Jewish communities by applying design thinking. Thus far, participants have already launched two brand new Torah initiatives which were conceived at the Forum. Stay tuned, you’ll be hearing from them soon! 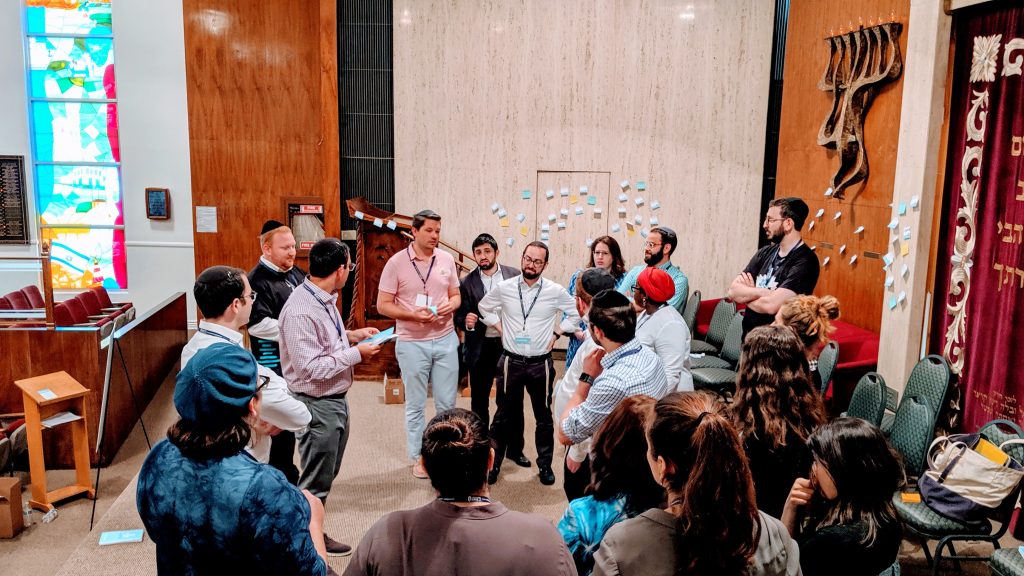 OU senior leaders convened on Capitol Hill in June for the OU Advocacy Center’s 23rd annual Leadership Mission to Washington, D.C. Throughout the day, they met with legislators to discuss funding for Department of Homeland Security grants to protect synagogues and other houses of worship, and other priority issues. Among those the OU leaders met with were Senators Chuck Schumer (D-NY); Tom Cotton (R-Ark); Ted Cruz (R-Texas) and Rep. Eliot Engel (D-NY). The OU leaders’ agenda on the Hill included:

Increasing funding for the Department of Homeland Security’s Nonprofit Security Grant Program that OU Advocacy helped create fourteen years ago. The program has yielded $329 million since then, and the majority of the funding has been awarded to our shuls and schools to fortify them against potential attacks and help keep our children and community safe. OU Advocacy is working to dramatically raise next year’s funding level for this critical program from $60 million to $90 million.

Combating the anti-Israel BDS campaign and passing the Strengthening America’s Security in the Middle East Act of 2019 (H.R. 336/S.1). This bipartisan legislation includes the Combating BDS Act of 2019, which allows state and local governments to adopt measures to divest their assets from companies and other entities that use boycotts, divestments or sanctions to influence Israel’s policies.

Passage of the Lessen Impediments from Taxes for Charities Act (H.R. 1545/S.632), which would repeal a new provision in the federal tax code that taxes nonprofit entities for providing parking or transit benefits to their staff. This new tax will likely cost synagogues and day schools many thousands of dollars annually. At the OU’s urging, the House of Representatives started work to repeal this new tax the week prior to the OU Leadership Mission. 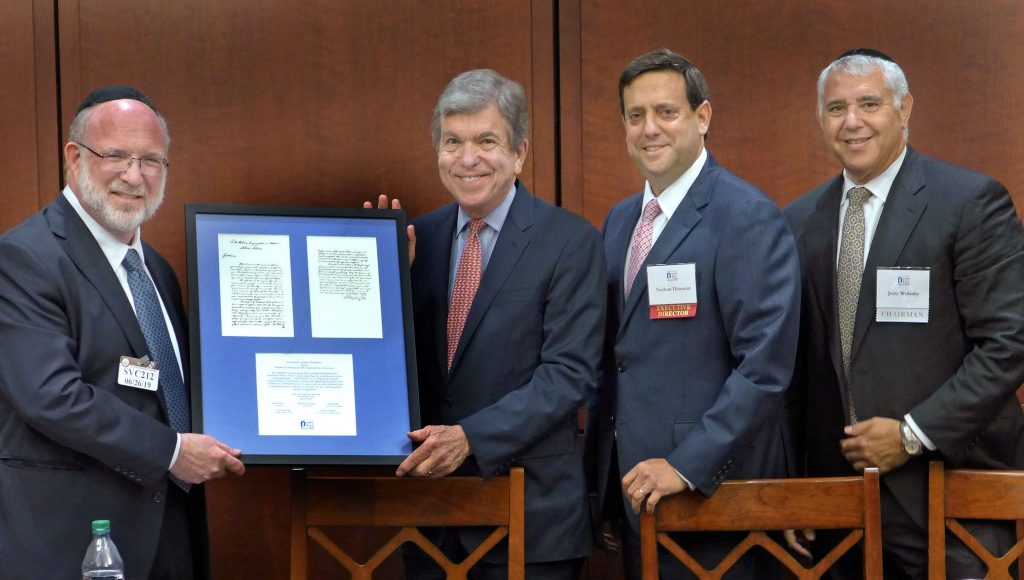 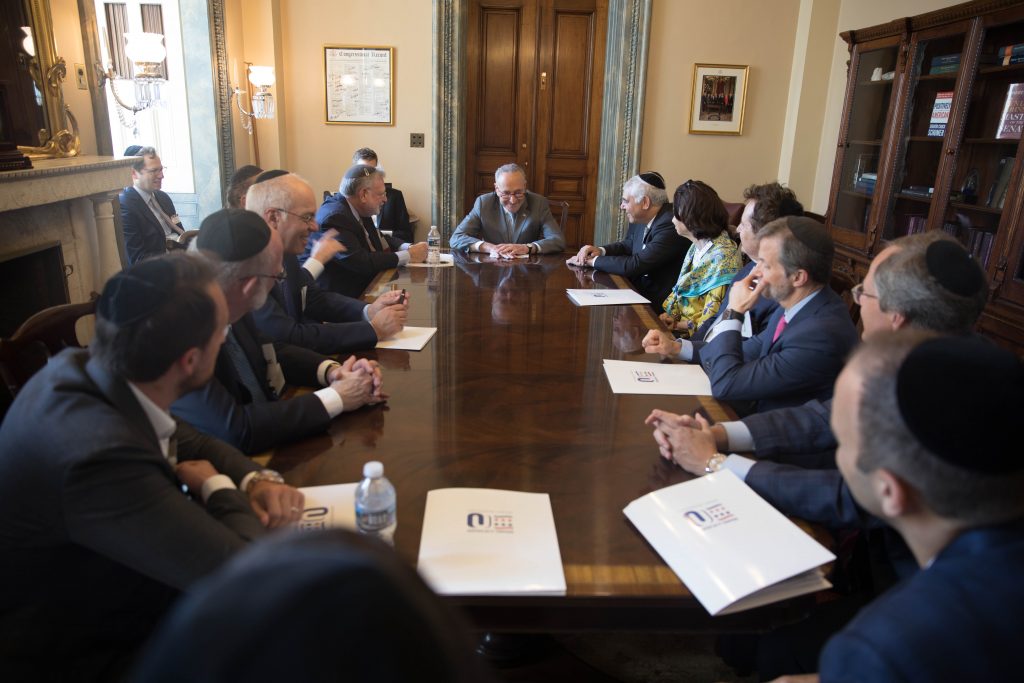 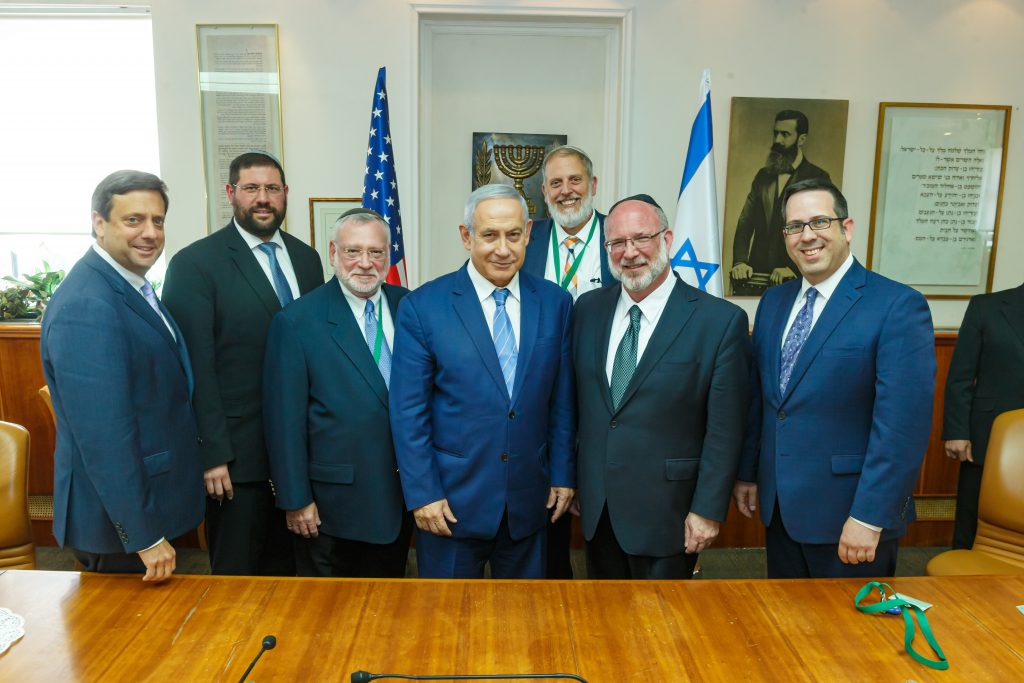 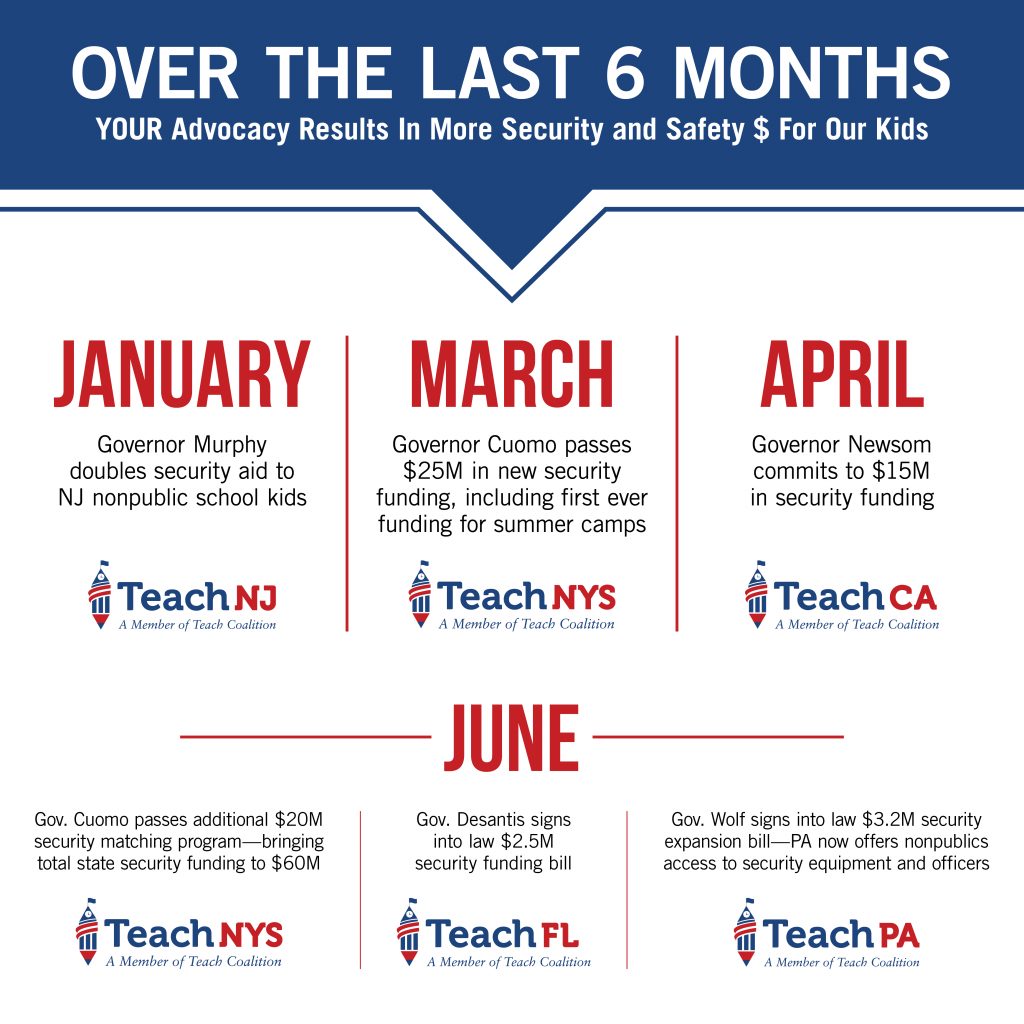 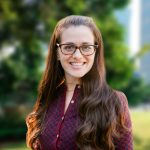 Annie Watman, Grassroots Director of Teach NYS, was recognized by the New York Jewish
Week as one of this year’s “36 Under 36” Jewish leaders. The paper acknowledged her
work to increase STEM funding and school security for nonpublic schools, as well as for
advocating for the inclusion of kosher and halal food in the city’s free lunch program. 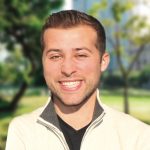 Shachar Avraham joins the Israel Free Spirit: Birthright Israel team as the new Recruitment and Strategic Partnerships Manager. He is the former Co-Founder of Campus Pursuit, which was acquired by an ad agency in 2017, and brings his entrepreneurial spirit to the team. 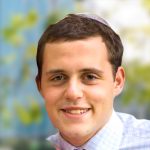 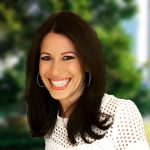 Rebecca Esses is the Managing Director, OU Center for Communal Research, where she will support all aspects of the Center’s research agenda. Prior to this, Rebecca served as Development Manager in the OU Department of Institutional Advancement. 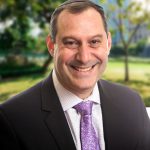 Rabbi Ari Rockoff joins the OU’s Institutional Advancement Department as Director of Strategic Partnerships, where he will manage a portfolio of major funding partners. He previously served as NCSY’s Director of Leadership Development. 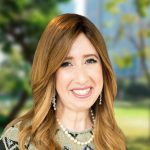 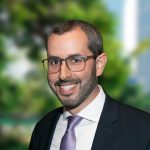 Rabbi Ahron Rosenthal is Director of Special Initiatives, a newly created Yachad department to develop and oversee major projects like Family Shabbatons and the Jerusalem Marathon. He is the former Director of New York Yachad. 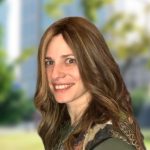 Tzivia Jofen, PsyD, has been appointed Director of Clinical Services to oversee the clinical needs of Yachad’s growing IVDU schools. She is the previous Director of Yachad’s National Department. 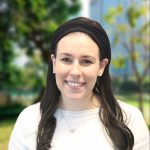 Rebecca Schrag Mayer takes on the role of Director of New York Yachad. This promotion is an addition to her role as Director, Informal Education, as that department has been combined with New York Yachad 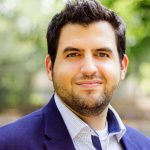 Rabbi David Pardo has been promoted to Managing Director of the Torah Initiatives Department, a new program to intensify limmud Torah in the Jewish community. He is also Executive Director of NextDor, a community and professional network for young Orthodox Jews. 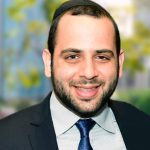 Hailing from fifty-six Jewish communities worldwide, one hundred women attended the OU Women’s Initiative’s inaugural Lay Leadership Summit this past May. Held at the Hilton Woodcliff Lake in New Jersey, the two-day conference, the first of its kind, was designed for Orthodox women serving as communal lay leaders to network, bond and further develop leadership skills.

“It was inspiring to see a group of women, incredibly diverse in age, experience and hashkafah, coming together to share their passion for the Jewish community,” said Founding Director of the OU Women’s Initiative Rebbetzin Dr. Adina Shmidman. 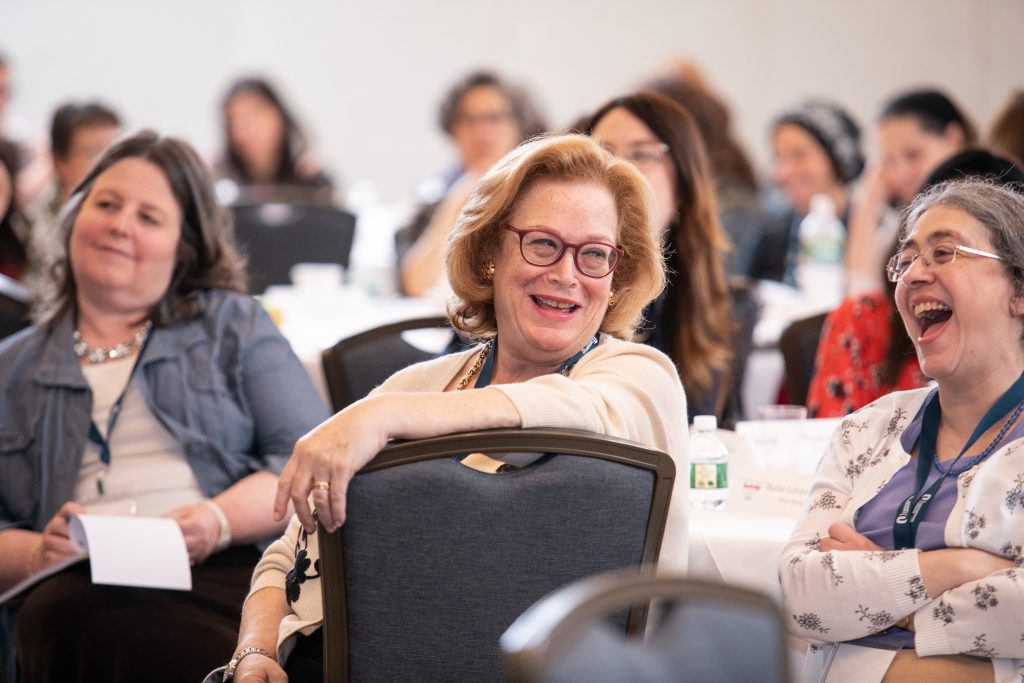 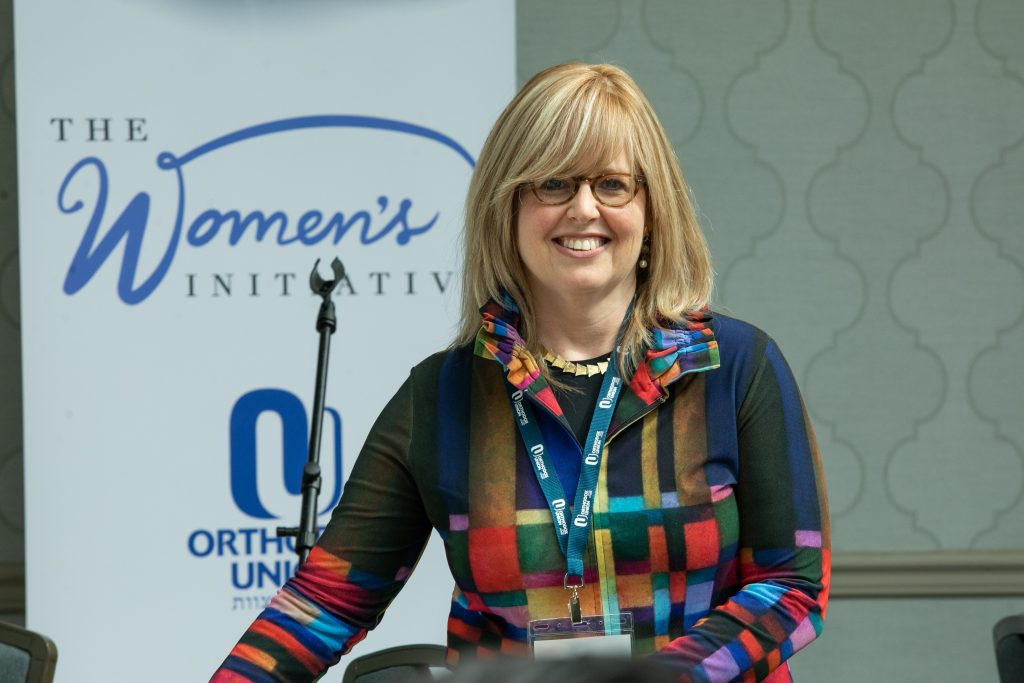 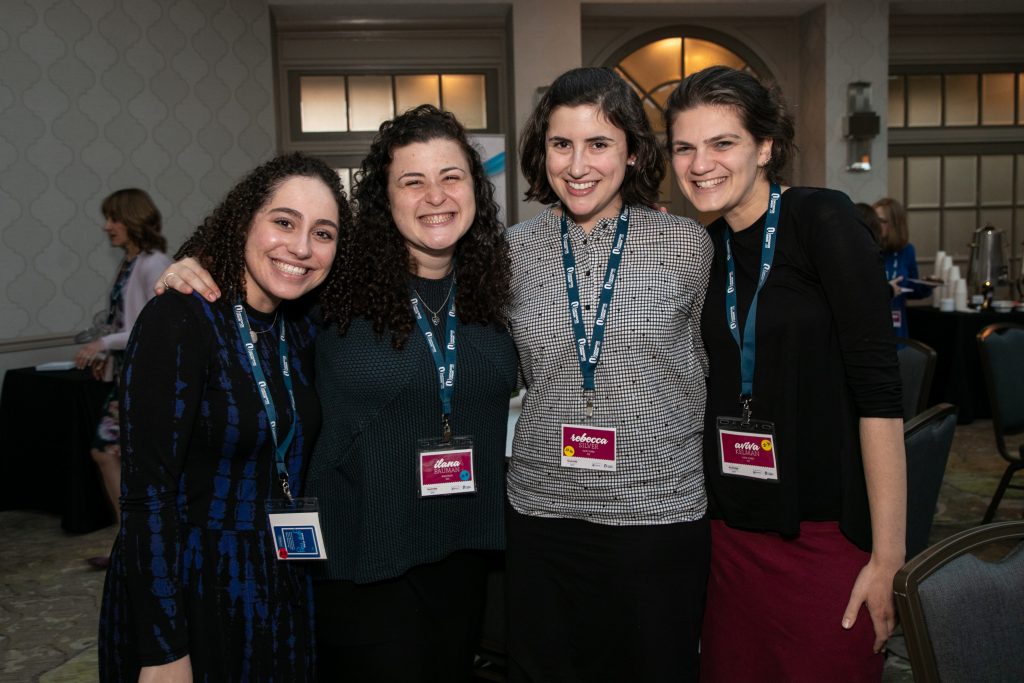 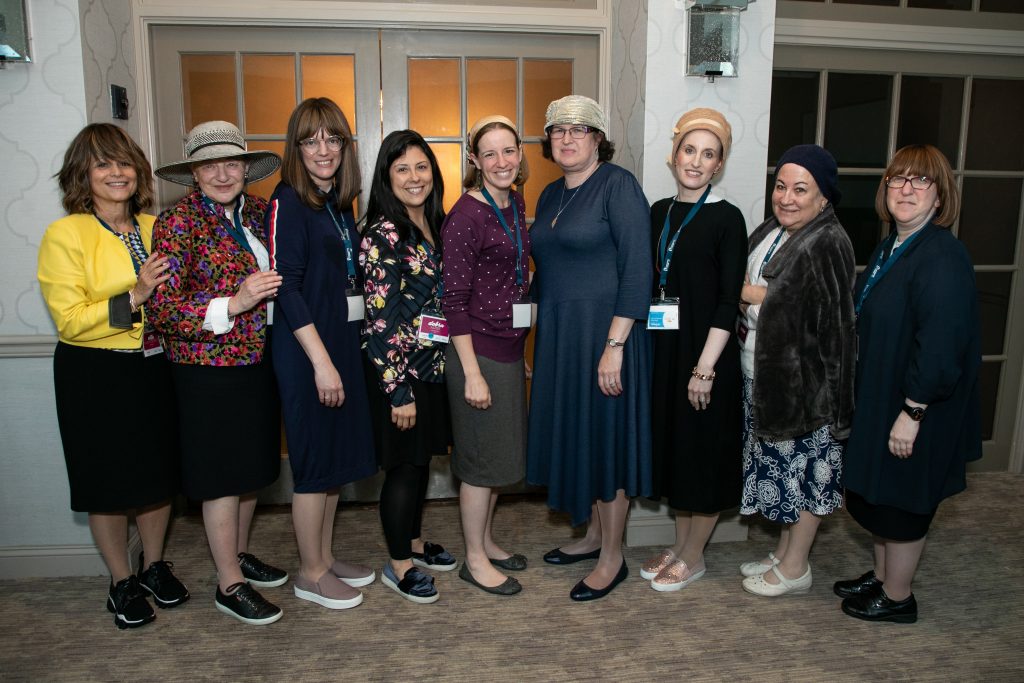 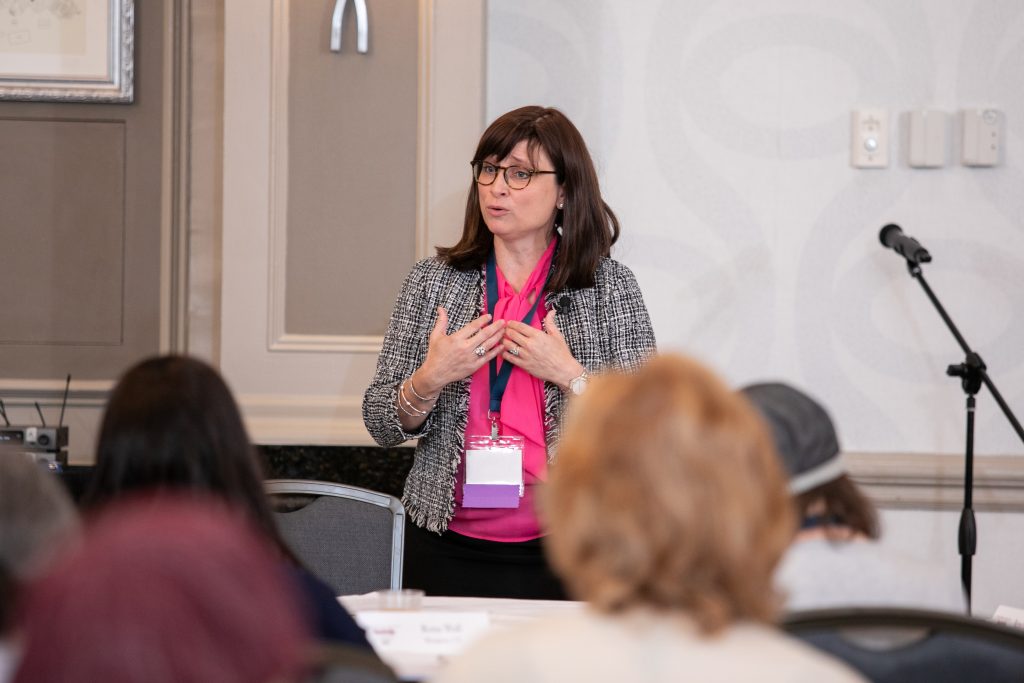 Dr. Erica Brown, Professor at George Washington University and Director of its Mayberg Center for Jewish Education and Leadership, discussing how to have difficult conversations. 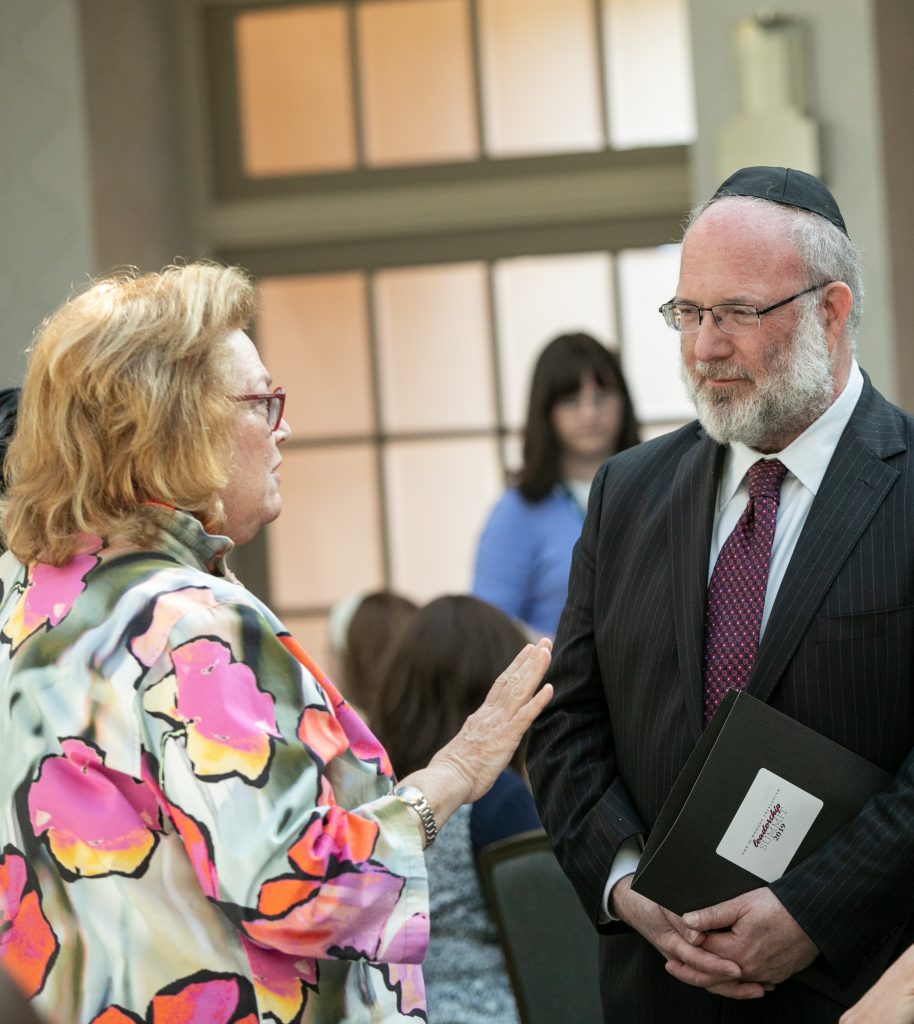 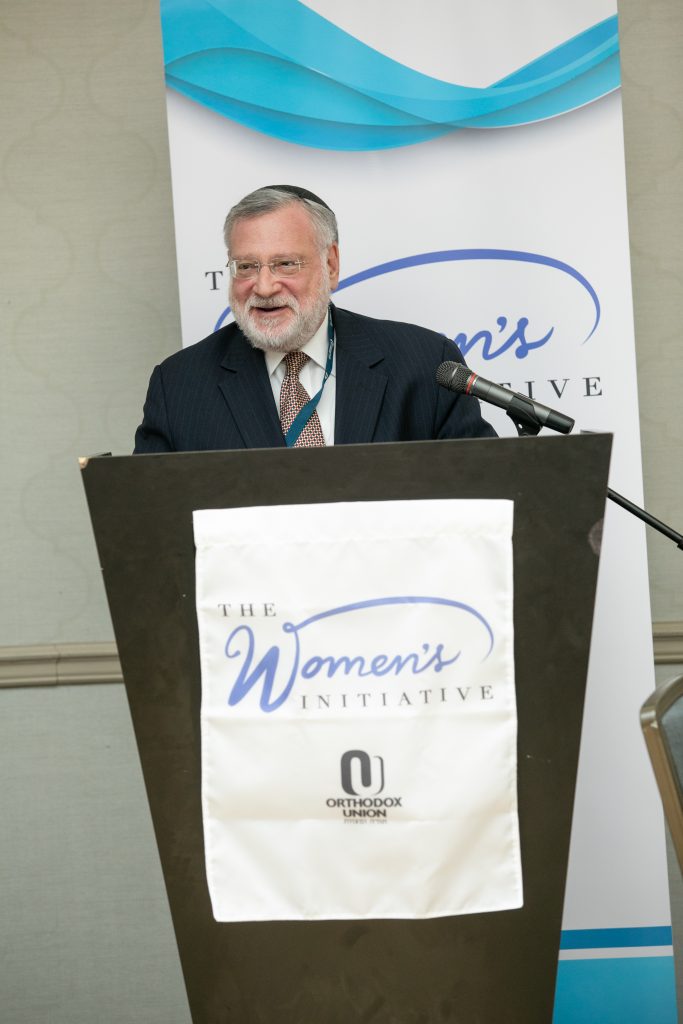 “The marker for success is not just what the women will pick up during the summit, but what they will take back to their communities.” —Allen I. Fagin, OU Executive Vice President 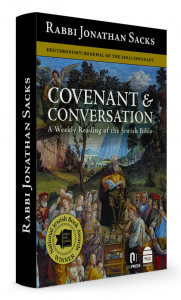 Covenant & Conversation – A Weekly Reading of the Jewish Bible
Deuteronomy: Renewal of the Sinai Covenant

The fifth and final volume of Rabbi Jonathan Sacks’ Covenant & Conversation is a fitting culmination to this acclaimed series. According to Rabbi Sacks, Deuteronomy “is the deepest and most remarkable statement of what Judaism is about.” This is because, as Rabbi Sacks has alluded to in this work’s subtitle, “Deuteronomy is the book of the covenant, the center-point of Jewish theology, and the project it defines is unique.”

Among the key words of Deuteronomy, according to Rabbi Sacks, are: First, Shema—“listen”—a word which appears ninety-two times in Deuteronomy, and which underscores the Jewish emphasis not on blind obedience or submission but instead on the imperative to interpret, internalize and understand God’s command. Second, the verb “love,” which strikingly appears in Deuteronomy more than in the other four books of the Torah combined; in Deuteronomy, love is directed not only toward God by Israel (as in the beginning of the Shema) but also by God toward His people. This love is the basis for the covenant formed between God and Israel. Third, Deuteronomy emphasizes joy. Although Deuteronomy is the tragic account of Moses’ failure to achieve his dream of entering into the Promised Land, for the nation that was to enter, Moses highlighted the joy that should accompany their fulfillment of the national destiny in the land flowing with milk and honey. Fourth, a theme of Deuteronomy is remembrance—“Remember the days of old, consider the years of ages past; ask your father, he will inform you, your elders, they will tell you.” As Jews, we carry not only our personal memories but the memories of a nation, and the memories of the nation are what create a shared national ethic and character.

This eagerly anticipated volume, replete with Rabbi Sacks’ characteristic insight, elegance and wisdom, completes what is already a modern classic and an indispensable companion to the Five Books of the Torah.

Shortly before the petirah of Rabbi Chaim Yisroel Belsky zt”l, a renowned halachic authority and one of the senior posekim of the OU Kosher division, the OU began in his merit a daily halachah initiative by e-mail, containing one halachah each day composed by a team of OU rabbis. After Rav Belsky’s passing, the Halacha Yomis e-mail has continued in his memory. This highly popular halachah series has now been collected into a book containing 354 halachot, one halachah for each day of the Hebrew calendar year.

The popularity of Halacha Yomis is based on several factors. Each halachah is presented in a clear and highly readable fashion. Halacha Yomis strikes the balance of accessibility to beginners while still presenting laws that are not well-known even to advanced students of halachah. In addition, the book contains the views of contemporary posekim for questions relating to modern-day life, including many pesakim by Rav Belsky, zt”l, as well as by ybl”c Rav Hershel Schachter, shlit”a, senior posek at OU Kosher.

Halacha Yomis addresses a wide range of practical subjects. The book is divided into two sections: Orach Chaim, covering the laws of every day, Shabbat and yom tov; and Yoreh Deah, which discusses the intricacies of kashrut. Some of the subjects addressed in the Orach Chaim section include, for example, the halachot of berachot on foods such as pizza, granola bars and peanut butter; the halachot of Shabbat, such as candle lighting in a hotel, eating before Kiddush and using a sous vide machine; halachot of Pesach, including the status of various foods and condiments as well as the laws of chametz after Pesach; and the halachot and minhagim of the Omer and the Three Weeks. The Yoreh Deah section of the book includes discussions of such issues as the definition of glatt, what to do if a piece of chicken appears bruised, the status of gelatin, the halachot of separating meat and dairy, chalav Yisrael and gevinat Yisrael, dairy bread, separating challah, yoshon, toveling and kashering utensils, and how to use one microwave for both meat and dairy.

As attested to by the thousands of subscribers who have been reading and enjoying Halacha Yomis for years by e-mail, this halachah series is a worthy companion to the study and observance of halachah in our times.