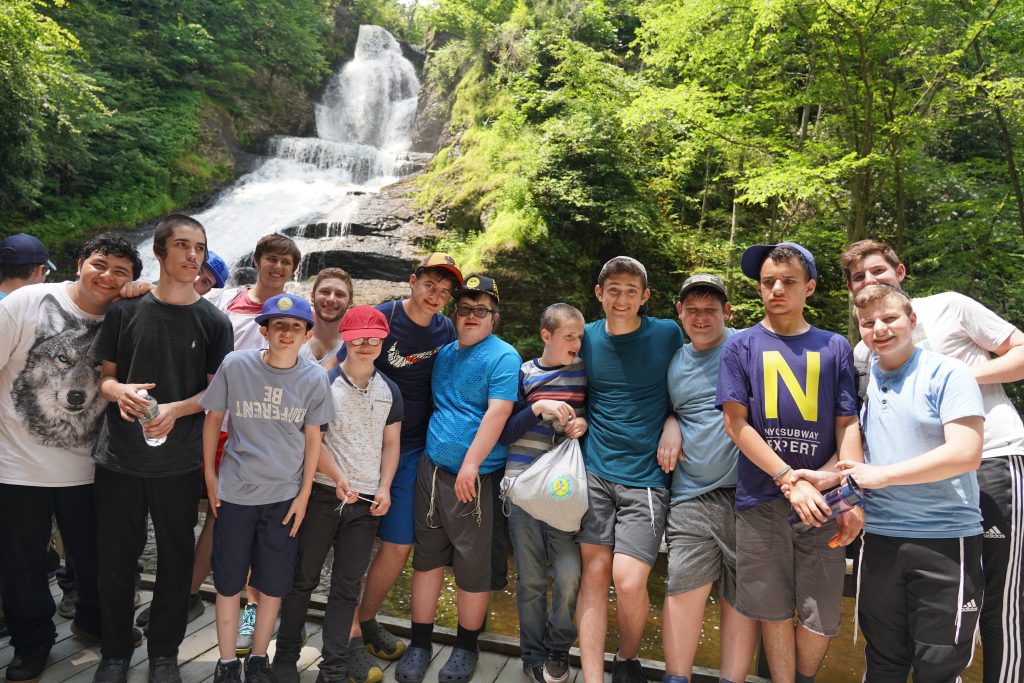 Campers at Yachad’s Camp Chaverim enjoying the thrill of a nature hike at Dingmans Ferry in Pennsylvania. Among Yachad’s twenty-nine summer programs, Camp Chaverim is its best-kept secret. Over 100 participants attend this male-only, six-week sleepaway summer program for individuals with disabilities ages six to twenty-five. Located on the campus of Camp Magen Avraham in upstate New York, Camp Chaverim provides its campers with the opportunity to socialize and engage with peers while fostering independence.

On the Road for Torah 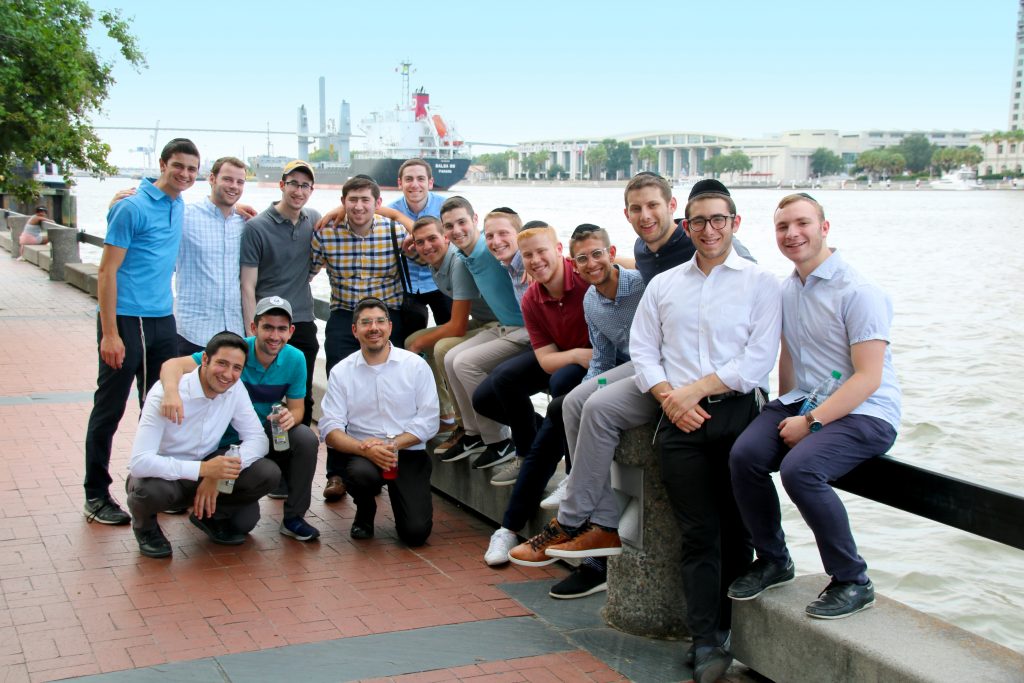 Kollel participants sightseeing in the riverfront district along the Savannah River in Savannah, Georgia. Courtesy of Ruvie Sturm

When it’s the Uvelechtecha Baderech Summer Kollel. During three weeks this past summer, fifteen young men traversed the East Coast, visiting dozens of Jewish communities—including Harrisburg, Pennsylvania, Richmond, Virginia, Charleston, South Carolina, and Savannah, Georgia—teaching Torah along the way. Whether running programming for high schoolers, visiting seniors in an assisted living facility or learning in the beit midrash, the kollel members brought a dose of spiritual energy to each city they visited.

“Growing up in the bubble of the tri-state area, we are often oblivious to the richness of Jewish life ‘out of town,’” said kollel participant Chaim Book. “This trip really gave us a glimpse of the sacrifice and beauty of a Jewish community.” 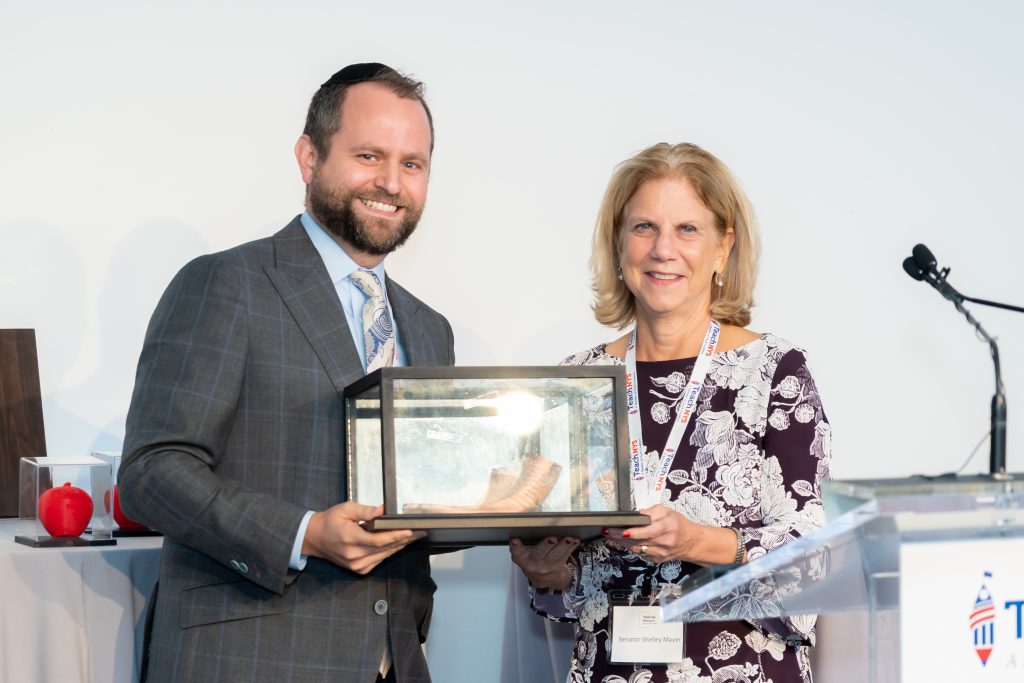 We are grateful to Senator Mayer for her leadership in Albany on behalf of each and every New York child. — Maury Litwack, Executive Director, Teach Coalition 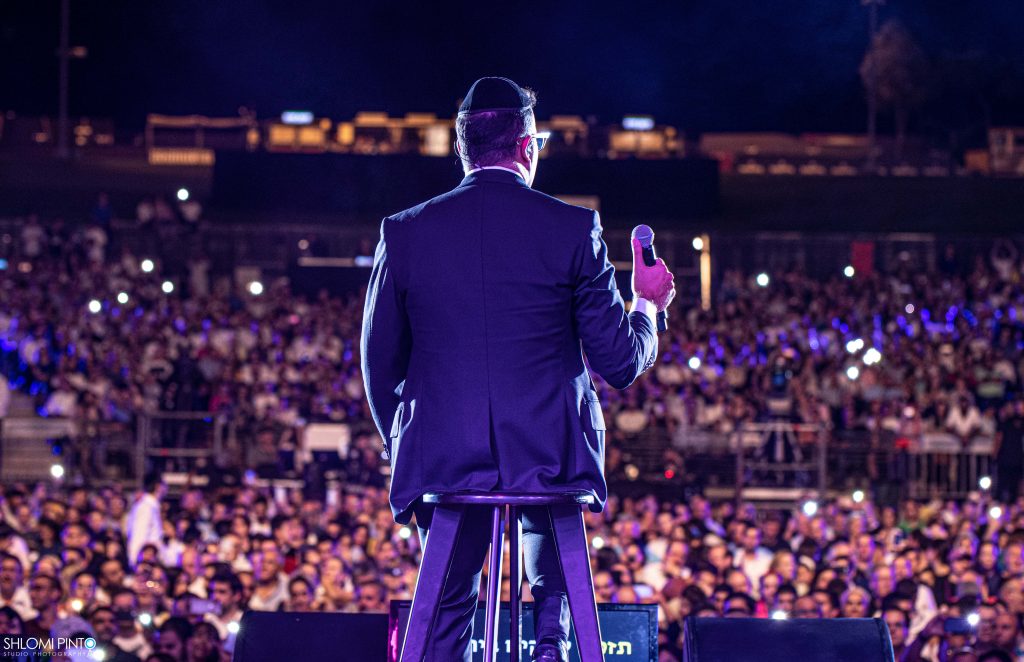 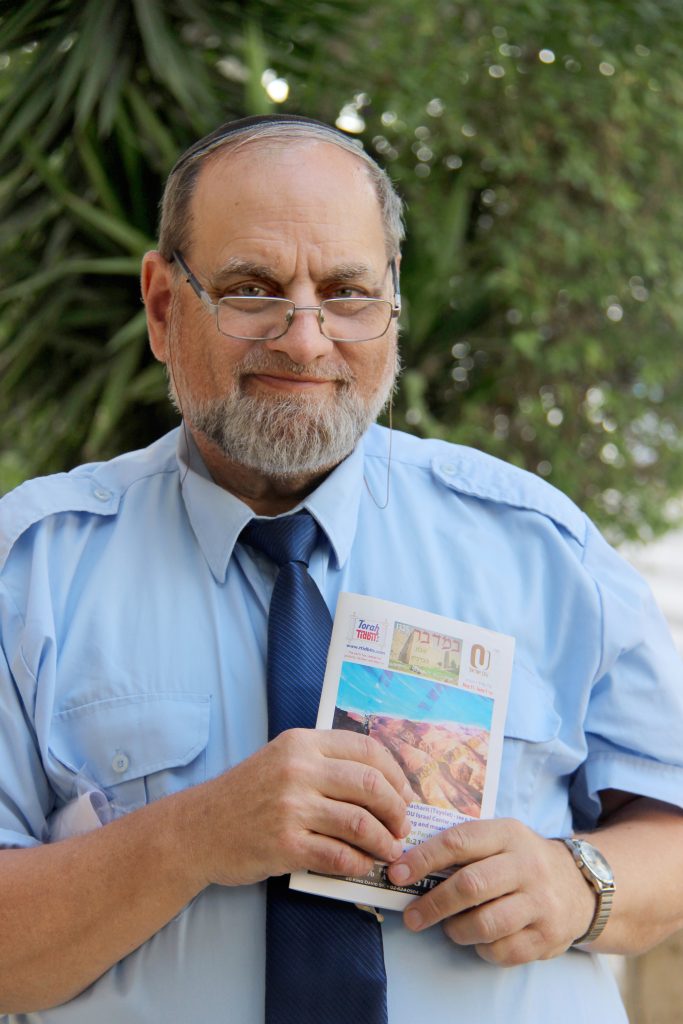 In celebration of OU Israel’s forty years of growth, more than 5,000 people joined the festivities at a Yaakov Shwekey concert in August, held in Rishon Le’Tzion. The OU Israel Center first opened its doors in downtown Jerusalem in 1979, with the mission of strengthening the bonds between the Jewish people, Torah and the Land of Israel. In the forty years since, the OU Israel Center has expanded, moved premises and grown above and beyond the dreams of its founders. This past year alone, more than 110,000 people have visited the Seymour J. Abrams Jerusalem World Center, OU Israel’s headquarters. Their programs include the Jack E. Gindi Oraita Program, Makom Balev, the Pearl and Harold Jacobs Zula Outreach Center, the L’ayla Women’s Initiative, NCSY Israel, Camp Dror and more. The celebrations have stretched out across the year, including a Yom Ha’atzmaut event, culminating with the mega-event of Torah Yerushalayim in October (see following page

“Today, OU Israel offers an unbelievable array of classes, events and programs; it has truly become a home away from home for Anglos in Israel, whatever their stage in life. We offer something for everyone.”   —Executive Director, OU Israel Rabbi Avi Berman

OU Israel also honored the contributions of Phil Chernofsky, the recently retired Educational Director and Editor of Torah Tidbits who for thirty-eight years played “a vital role in shaping OU Israel into what it is today,” said OU President Mark (Moishe) Bane. “From the Torah Tidbits weekly magazine that he launched in 1992 that reaches 55,000 readers each week, to his Shabbatonim and shiurim, Phil unstintingly gave of himself, changing the landscape of Torah learning for English speakers in Israel and the world over. His impact is immeasurable.”

OU-JLIC Expands on the Israel Front 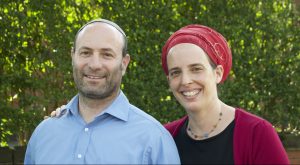 With a rising number of Anglos choosing to continue their secular education in Israel, the OU’s Jewish Learning Initiative on Campus (OU-JLIC), in partnership with World Mizrachi, just opened a second campus program in Israel at Bar-Ilan University. Serving at an off-campus site in Givat Shmuel are Rabbi Yehuda and Chagit Peles, OU-JLIC’s newest Torah Educator couple. Rav Yehuda spent nine years studying at Yeshivat Har Etzion, obtained semichah from the Chief Rabbinate of Israel, served as a paratrooper in the IDF and received degrees in chinuch, Tanach and Jewish philosophy at Herzog College. Chagit received her bachelor’s from Hebrew University and a master’s from the Azrieli Faculty of Medicine in Tzfat and is a registered dietitian. She is currently studying at Bar-Ilan University for her PhD in nutrition. OU-JLIC, also at IDC-Herzliya, is currently on twenty-three campuses in the United States, Canada and Israel.

Around 2,500 participants came to listen and learn from twenty-nine internationally renowned scholars at the OU’s third annual Torah New York event at Citi Field in September. In preparation for the Yamim Noraim, the day of Torah learning and inspiration featured sessions on a wide range of topics, from repentance in an age of social media to smart homes and Shabbat observance. Photos: Kruter Photography 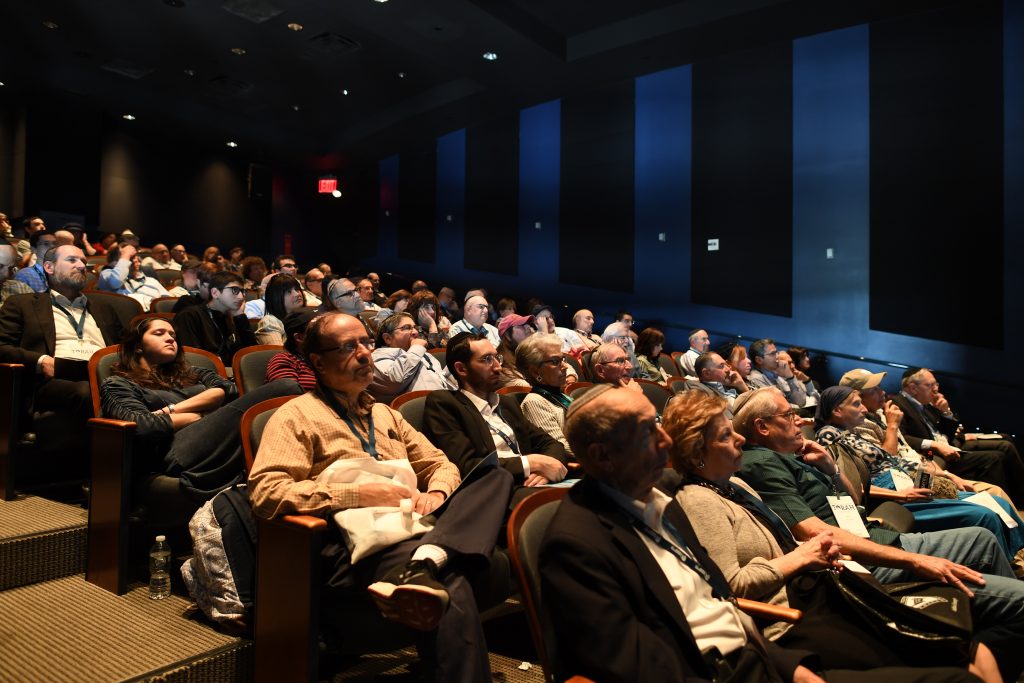 Participants watching the never-before-seen recording of the Rav, Rabbi Joseph B. Soloveitchik, delivering one of his famed annual Teshuvah Derashot, which screened several times throughout the day. 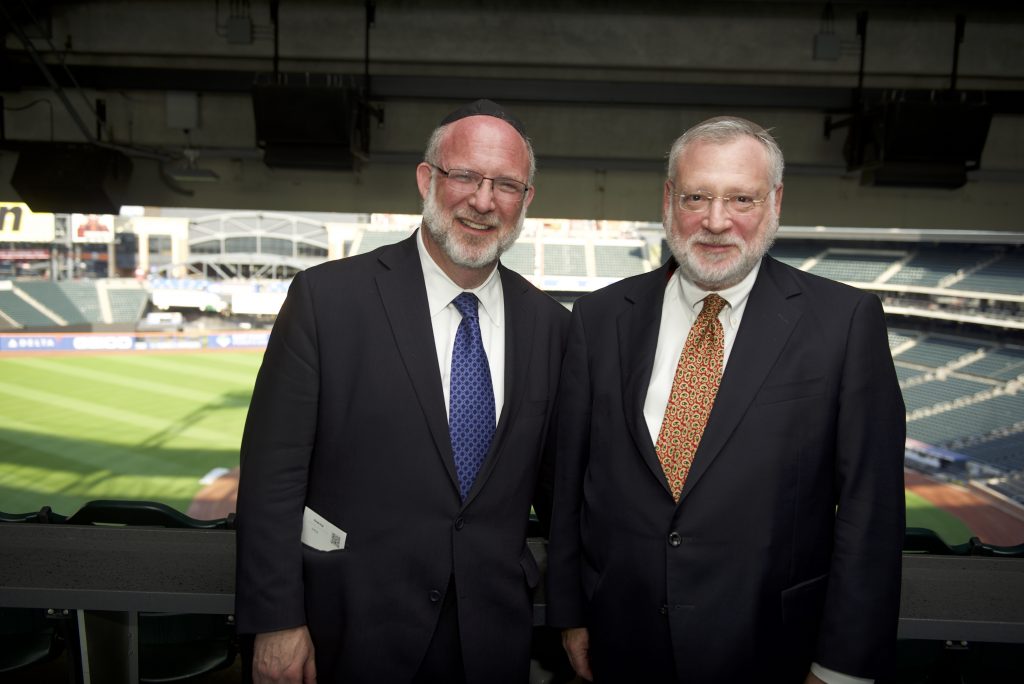 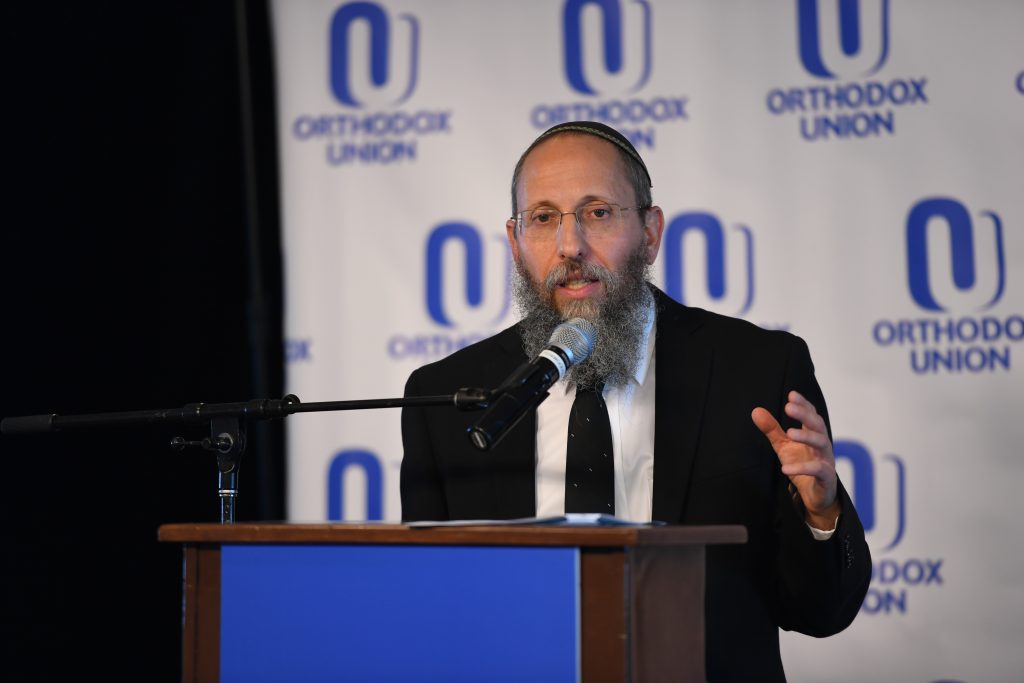 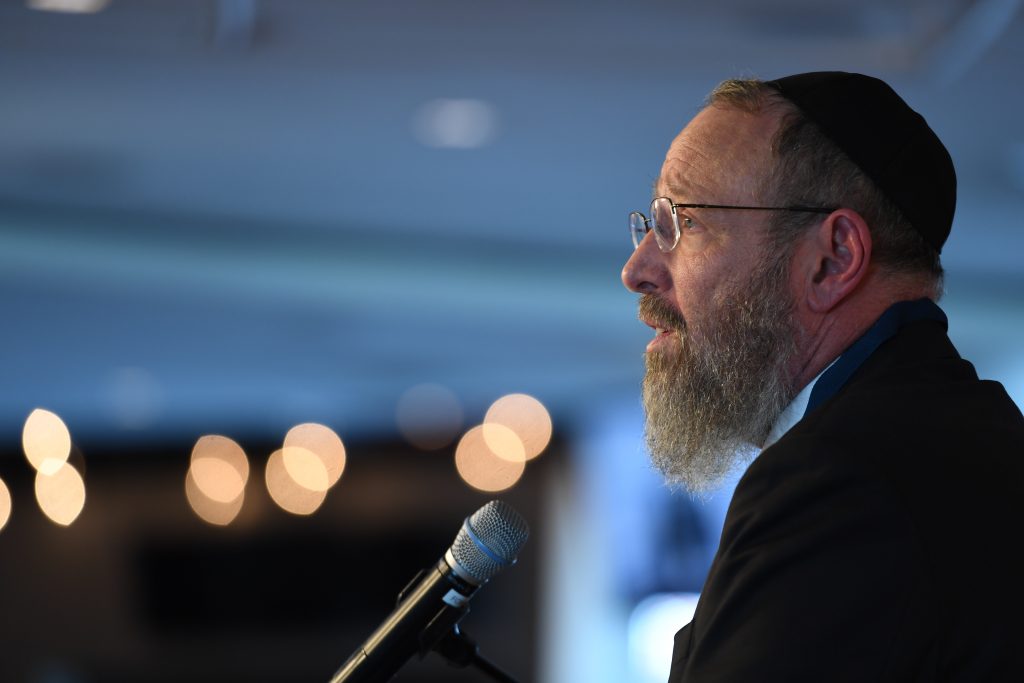 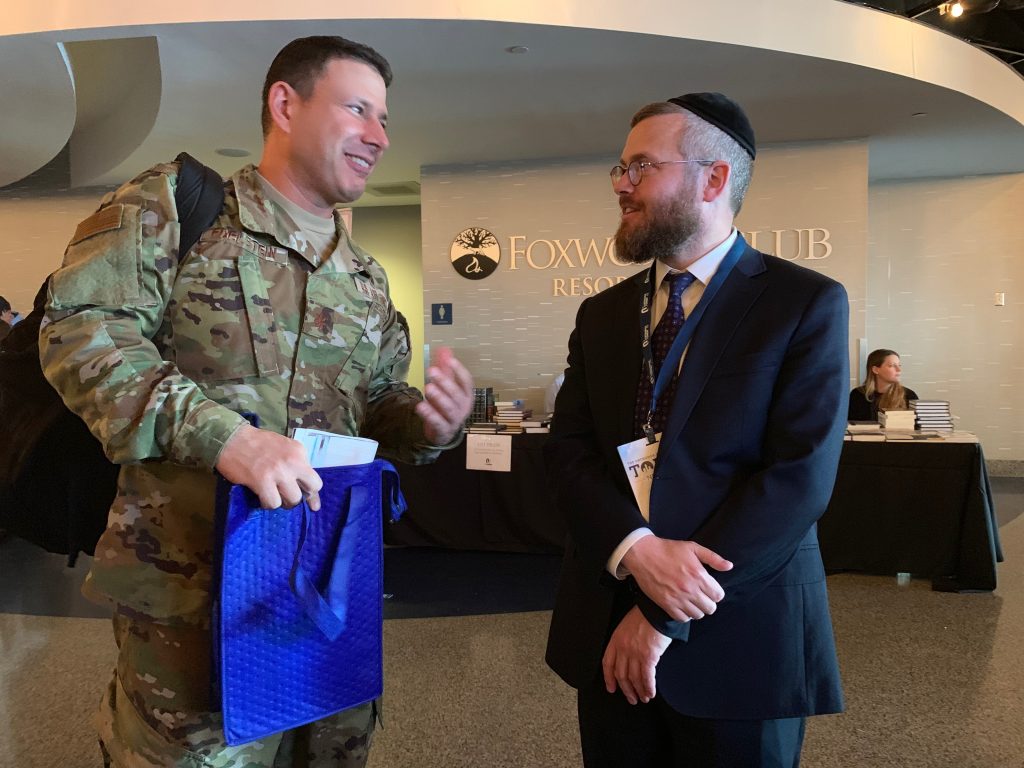 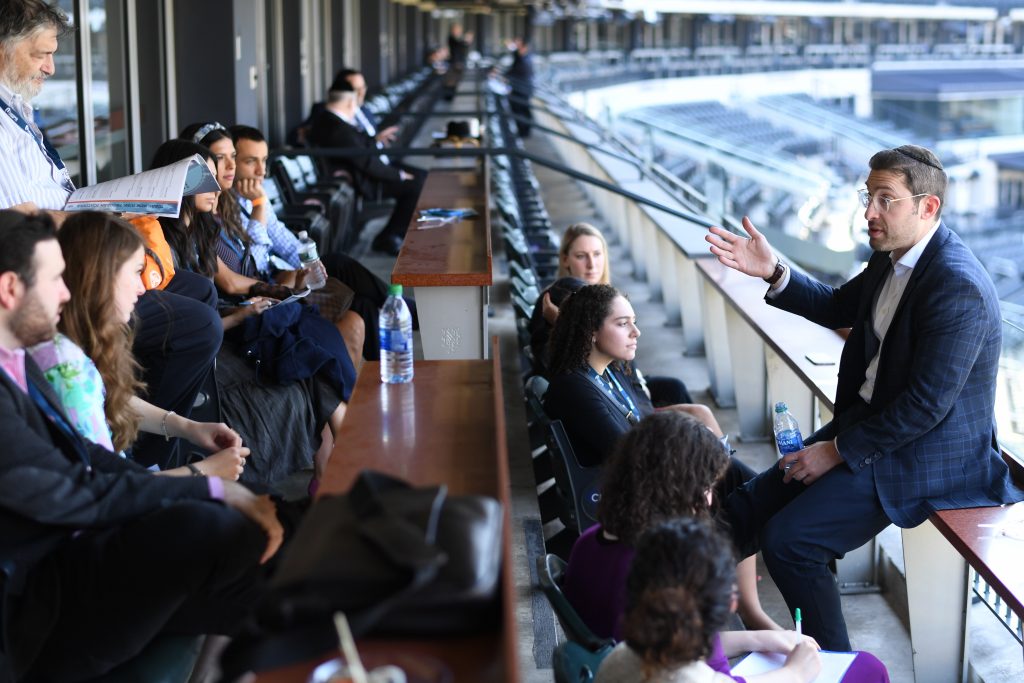 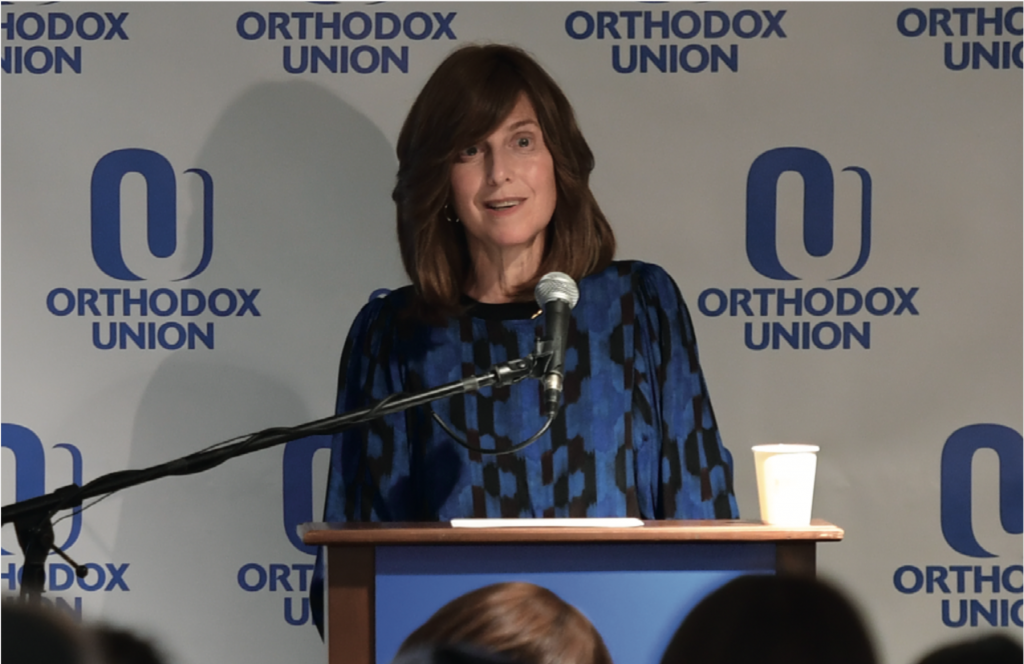 Dr. Ora Wiskind, Associate Professor and Head of the Graduate Program in Jewish Studies at Michlalah College, Jerusalem, speaking about self-transformation during Tishrei. 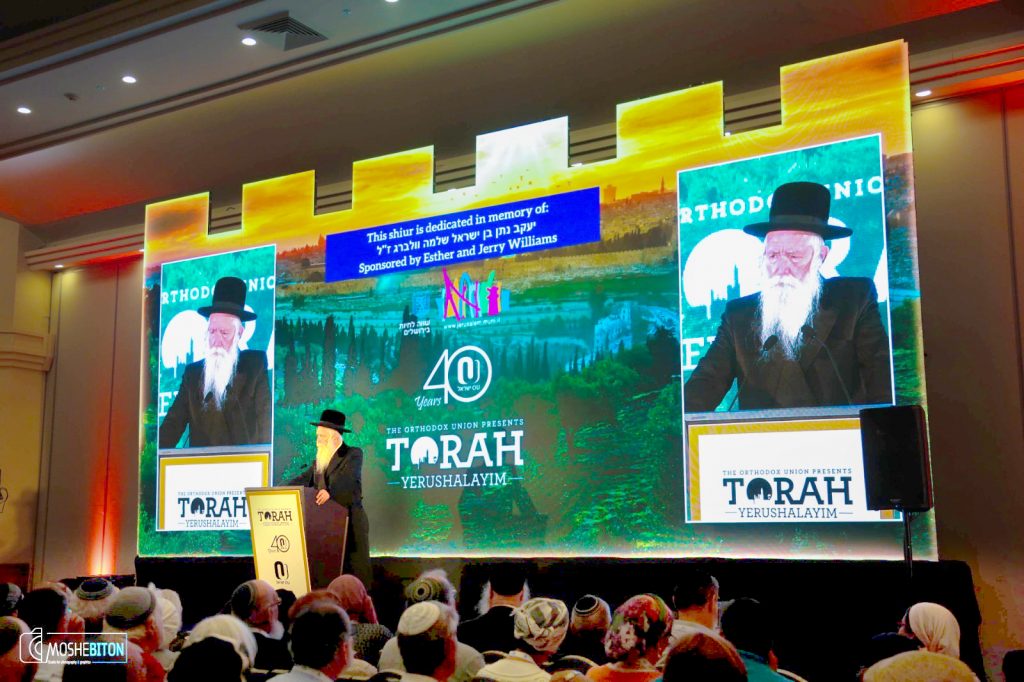 Expanding upon the OU’s successful Torah events in New York and Los Angeles, OU Israel hosted the inaugural Torah Yerushalayim event at the Ramada Jerusalem Hotel in October. With over 2,000 in attendance, the day of learning, chizuk and transformation in preparation for Yom Kippur featured more than thirty-five Torah educators and lecturers. Pictured: Rabbi Yitzchak Dovid Grossman, Founder and Dean of Migdal Ohr educational institutions, speaking at the event. 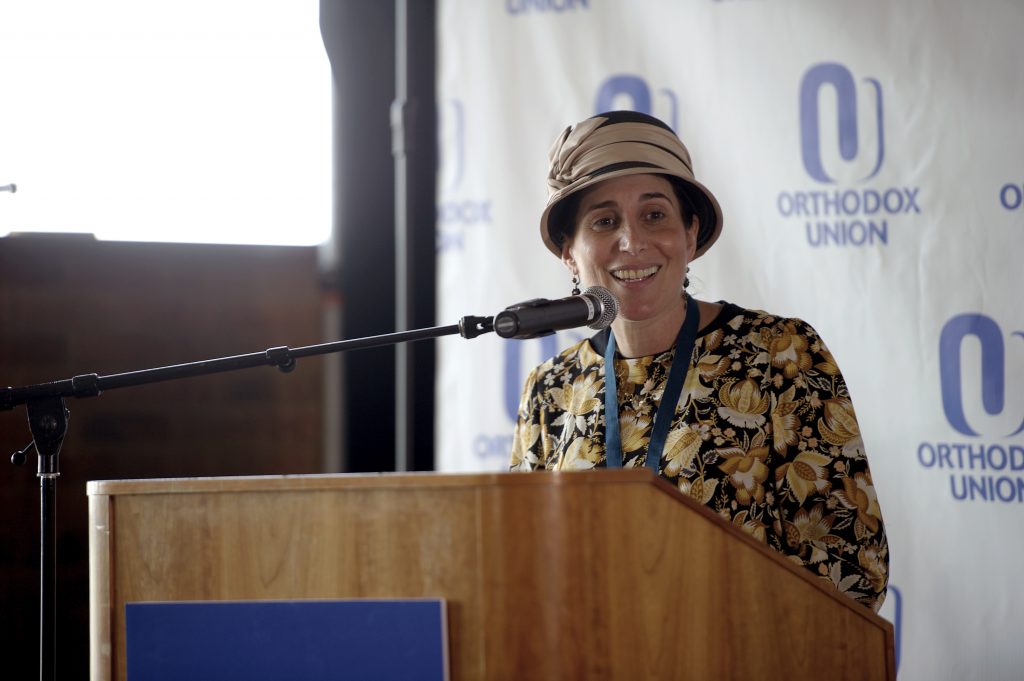 “Adina Shmidman is now the destination for rabbis across the nation seeking women scholars.” —Etta Brandman Klaristenfeld, Chair of the Women’s Initiative

Since its founding in 2017, the OU Women’s Initiative has made showcasing, supporting and developing women’s scholarship a pillar of its work. Through its ongoing Scholars Program, WI events bring high-caliber women scholars—both known and emerging—to shuls, schools and audiences across the nation, deepening religious and communal engagement. WI’s most recent events included:

“The WI looks forward to continuing to partner with our shuls and communities to provide growth and learning opportunities for women,” said Rebbetzin Dr. Adina Shmidman, Director of WI.

For more information regarding the WI and upcoming programs, visit ou.org/women.

…Miriam Braun, who joins the OU Marketing and Communications Team as Senior Marketing Manager. She primarily manages Yachad’s digital and social media needs, and advises on broader OU Communications initiatives. Miriam comes to the OU with over five years of experience as Digital Marketing Manager at Jewish National Fund, where she managed all digital campaigns and social media. Prior to that, she worked at various ad agencies, managing clients in both the non-profit and for-profit world. Miriam is a graduate of the Macaulay Honors College at Baruch and she holds a bachelor’s in business marketing.

…Nina Halon, who joins the OU’s Human Resources team as a Talent Management Specialist. After working in human capital within non-profits, finance and commodities trading, Nina is stepping in to drive the OU’s professional development trainings. She believes in actively working toward workplace satisfaction and productivity and enjoys being a part of that process. Nina earned a bachelor’s degree in behavioral science from Mercy College and holds a master’s in social organizational psychology from Columbia University.

…Josh Gottesman, who has been promoted to OU Assistant Director of Human Resources. He focuses on the professional development of one of the OU’s biggest assets, its employees. Prior to joining the HR team six years ago, Josh worked for NCSY for eight years. Josh holds an undergraduate degree in psychology from Yeshiva University, an MBA in industrial/organizational psychology and HR management from the Zicklin School of Business at Baruch College, and is certified as a Senior Certified Professional by the Society for Human Resource Management.

…Nathan Diament, OU Executive Director for Public Policy, on being named to the US Department of Homeland Security’s (DHS) newly created Subcommittee for the Prevention of Targeted Violence Against Faith-Based Communities. Diament is among eleven representatives from diverse American faith communities and law enforcement leaders appointed to the group. The committee was formed in the wake of recent attacks against synagogues, churches, temples and mosques and will focus on the security of faith-based organizations across the country. 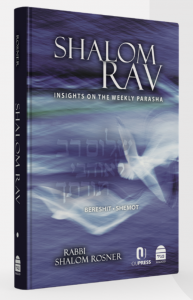 Rabbi Shalom Rosner is well-known for his popular and engaging shiurim on a wide variety of Torah subjects. This volume collects Rabbi Rosner’s inspirational shiurim on the weekly parashah, containing a broad array of brief observations culled from a wide range of Torah sources. In addition to the classic commentaries on the Torah, Rabbi Rosner presents insights and stories from a host of gedolim of the recent past, including Rabbi Avraham Yitzchak HaKohen Kook, the Lubavitcher Rebbe, Rabbi Joseph B. Soloveitchik, Rabbi Avrohom Pam, Rabbi Shimon Schwab, Rabbi Shlomo Wolbe and Rabbi Aharon Lichtenstein, as well as contemporary leaders such as Rabbi Avigdor Nebenzahl, Rabbi Dovid Feinstein, Rabbi Yitzhak Zilberstein, Rabbi Adin Steinsaltz, Rabbi Asher Weiss and Rabbi Yaakov Medan. This partial listing should give the reader some sense of the breadth of sources one will encounter in this work.

Rabbi Rosner’s focus is not on the simple meaning or peshat of the text, but rather on the inspirational message that can be derived from the Torah’s teachings. In this regard, Shalom Rav follows the long and distinguished tradition of derush, homiletical works that seek to address our contemporary issues through the lens of the parashah. By use of parables, anecdotes, analogies and sharp interpretations, baalei derush find lessons in the parashah for our everyday lives. To give one example, Rabbi Rosner cites Rabbi Shlomo Yosef Zevin, who explains the lesson behind the names of Yosef HaTzaddik’s children, Efraim and Menashe:

Rav Zevin points out that these two names are not just about one individual and his two children. We know that the actions of the fathers portend for their descendants; in this case, these two children represent middot that we all have to have. We’re referred to as she’erit Yosef and haben yakir li Efraim. We are all Yosef’s children, so we are all Menashe and Efraim. They represent two of our kochot: Menashe represents turning from evil—help me root out my pain, my diﬃculties, the negative. Efraim represents doing good, gaining the positive. Klal Yisrael is never referred to as Menashe’s children because turning from evil is not the ikar. We are called the children of Efraim because the ikar is the obligation, the doing good, the light of Torah . . .

In the pages of Shalom Rav, readers will find an abundance of derush in keeping with the finest of this venerable tradition. 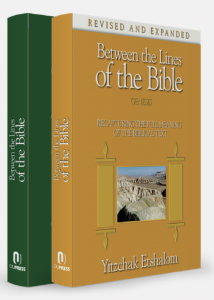 OU Press Classics
Between the Lines of the Bible:
1. Genesis—Recapturing the Full Meaning of the Biblical Text
2. Exodus—A Study from the New School of Orthodox Torah Commentary
By Rabbi Yitzchak Etshalom
OU Press and Urim Publications

In contrast to the works of derush discussed above, Rabbi Yitzchak Etshalom’s Between the Lines of the Bible series advocates for a focus on the peshat, the plain sense of the text, while incorporating new insights culled from modern disciplines such as archeology and literary analysis. Rabbi Etshalom’s work presents an opportunity for readers to become familiar with the work of one of the great proponents of the “new Orthodox school” of Biblical commentary. This methodology, which has emerged over the last generation primarily in Religious Zionist circles in Israel, offers an approach which is rooted in tradition but also highly innovative. In encountering the text on its own without preconceived notions, Rabbi Etshalom discovers new solutions to ancient questions, and answers more recent questions raised by Biblical critics. Between the Lines of the Bible is an excellent introduction to a new world of Torah commentary, which is both highly original and deeply committed.