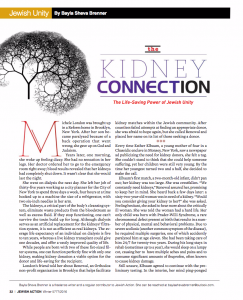 Jewish Action, the quarterly magazine of the Orthodox Union, won two Simon Rockower Awards for articles that appeared last year. The magazine’s feature story “The Kidney Connection: The Life-Saving Power of Jewish Unity” won first place in Award for Excellence in Feature Writing and second place in The Rambam Award for Excellence in Writing About Health Care. Written by Bayla Sheva Brenner, the article, which appeared in the Winter 2016 issue of Jewish Action, highlights the stories of three selfless Jewish individuals who saved lives by donating their kidneys.

The prestigious awards, referred to as the “Jewish Pulitzers,” are sponsored by the American Jewish Press Association (AJPA), which holds a journalism competition for leading Jewish magazines and newspapers from across the country. The entries are judged by a panel of judges with expertise in journalism, writing/reporting, editing, graphic design and cartooning in both the Jewish and non-Jewish media. This is the sixth year in which Jewish Action has participated in the Rockower Awards competition, and it has been honored in each of the six years.

Allen I. Fagin, OU executive vice president, stated, “Our heartiest congratulations to Bayla Sheva Brenner for her outstanding journalism, and to Nechama Carmel, Sara Olson and the entire Jewish Action team who continuously pursue journalistic excellence, educating and enlightening our community in every issue. We should all be very proud of their outstanding accomplishment.”

Gerald M. Schreck, chairman of the Jewish Action Committee, said, “At a time when many popular secular magazines are losing readership, it’s gratifying to know that Jewish Action is being recognized by professionals as a first-class media product.”

For more information about Jewish Action, to advertise or to subscribe, visit www.ou.org/jewish_action.