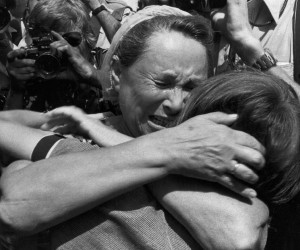 Entebbe hostages reuniting with their loved ones. Photo: AP

July 4, 1976: Americans were jubilantly celebrating the bicentennial with fireworks, nautical parades and a visit from Queen Elizabeth bearing a replica of the Liberty Bell, proudly letting freedom ring. For Israelis and for Jews around the world, the celebration of freedom was a cruel reminder that 106 of our brothers and sisters, including children and the elderly, were the antithesis of “free.” They were being held hostage after their Air France flight had been hijacked by Palestinian and German terrorists, and taken to Entebbe in Central Uganda. Idi Amin Dada, president of Uganda, welcomed the terrorists with open arms and consistently declared Israel responsible for the fate of the hostages. Holocaust survivors among them, the hostages endured an Eichmann-esque selection, and were isolated from their fellow gentile passengers, who were subsequently released. The hostages were then used as pawns in a deadly game intended to make the Israeli government capitulate to the hijackers’ outrageous demands.

This summer, we mark the fortieth anniversary of “Operation Thunderbolt.” Many of us remember being glued to our TV screens watching the miraculous events unfold. We have all seen at least one film version of what is termed “the most audacious hostage rescue mission in history.” And recently, military historian Saul David authored a new book entitled “Operation Thunderbolt” that reads like a fast-paced, nail-biting thriller, but is, in fact, a work of non-fiction. The book is culled from news reports, diaries, private papers and extensive interviews. It contains fascinating declassified information about the tense eight days during which leaders like Yitzchak Rabin, Shimon Peres, Ehud Barak and Yoni Netanyahu had to make unimaginably difficult decisions, weighing the lives of the hostages against the inherent risks of negotiating with terrorists or conducting military action in hostile, foreign territory. The book also paints a vivid picture of the experiences of the hostages, their fears as well as their discomforts, including the lack of privacy, hygiene, food and clean clothing. We get an up-close view of their interactions with one another and with the terrorists, unraveling the twisted dynamics that coalesce in an inhuman situation. Forty years later, many of the untold stories are told, and our appreciation for the intelligence, the risks, the chutzpah, the bravery, the sacrifices, the commitment to Am Yisrael and the Hand of God orchestrating every detail, deepens like a bottomless pit. The book is a must read.

While the raid on Entebbe was undoubtedly a national triumph for Israel and ignited a swelling of Jewish pride all over the world, the likes of which had not been experienced since the Six-Day War, the victory was tempered with tragedy. Most famously, Yoni Netanyahu, the mastermind of the plan and the leader of the Sayeret Matkal unit that carried out the rescue was shot and killed in the first stages of the mission. The Jewish people not only lost a heroic soldier, we lost a man with a brilliant mind, a poetic soul and a bright future, cut down as he was securing the future of so many others. Yoni’s name, reputation and legacy are forever linked with the success of this mission. Sadly, Yoni Netanyahu was not the only one to lose his life in Entebbe. Pasco Cohen and Ida Borochovitch were killed by stray bullets; nineteen-year-old Jean-Jacques Mimouni was killed by friendly fire when the Israeli soldiers entered the room and, following orders, shot whoever was standing. Seventy-four-year-old Dora Bloch became ill and had been taken to the hospital. Though well enough to return to the airport, a compassionate doctor kept her longer than necessary, thinking she would be more comfortable in the hospital than in the poor conditions in the airport terminal. She was dragged screaming from her hospital bed, and brutally murdered by Idi Amin’s henchmen, revenge for being duped by the Israelis.

On this fortieth anniversary of one of the most miraculous events of the twentieth century, we celebrate with the survivors and their families, and we marvel and praise the stream of miracles that were outpouring every step of he way. In their wildest dreams, no one anticipated that the casualties would be so few, and yet every life is a world unto itself, and every lost life a black hole to the grieving family. We owe it to them to remember that their grief is revived every time the world champions this victory. Forty years later, as terrorism has evolved into something even more horrific, we must learn from the courage of those who dared to stand up to evil, be inspired by those who chose life even if it meant giving up their own, and even as we rejoice, we must be humbled by the fact that freedom does not ring for free.

Rabbi Steven Weil is senior managing director of the OU