Jamming on the bus during the musical Birthright trip. Tour leader Yitzy Glicksman is playing a melodica, a combination between a keyboard and a harmonica.

In December, twenty-seven Jews from North America toured the land of Israel for ten days, singing the entire way and joined by Lipa Schmeltzer, one of Jewish music’s biggest stars.

“Music on Tour” was one of the few Taglit-Birthright Israel trips solely devoted to the music of the Promised Land. Organized by Israel Free Spirit (www.israelfreespirit.com), the Orthodox Union’s Birthright division, the trip brought together participants who share a love of music.

“We realized that there was a need and interest in the musically oriented part of the Jewish population,” explains Scott Shulman, program director of Israel Free Spirit. “The land of Israel has so much to offer in this regard.”

The first step in running the trip was finding staff members who are involved in the music scene. Israel Free Spirit recruited Yitzy Glicksman, a knowledgeable freelance musician from Teaneck, New Jersey, and Liat Lemberger, marketing director at Universal Records, where she represents successful artists like Owl City. Participants came from all over North America and Canada, each of whom brought his or her own musical appreciation. Many brought their instruments: guitars, harmonicas and even a saxophone. Once the trip began, the connection between the participants was immediate.

“The music bridged a gap because everyone was singing and playing music,” says Lemberger, who taught the unaffiliated Birthright participants Jewish songs throughout the trip, including “Hinei Mah Tov” as they hiked down Masada.

Along with all the experiences expected of a Birthright trip, the trip explored the musical side of Israel with participants meeting with local musicians and popular artists and visiting the Rimon School of Jazz and Contemporary Music in Ramat Hasharon.

“It transcended our differences and brought us closer together,” says Glicksman. 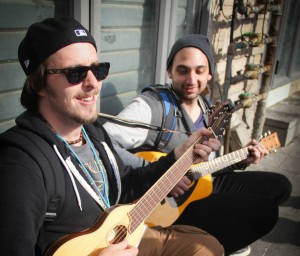 On Friday night, as the group prayed at the Kotel, they were joined by a special guest, Jewish music superstar Lipa Schmeltzer, who not only sang with them on Friday night but stayed with them the entire Shabbat, and even led a moving Havdalah service. Former Chair of OU Birthright Henry Orlinksy generously sponsored the superstar’s visit.

“It was everything I ever wanted,” says Eitan Prouser, twenty-six, a graduate of Molloy College. “I needed some inspiration and I needed to see something I hadn’t seen before. The trip gave me that.”