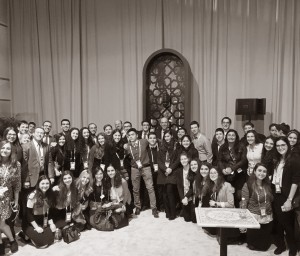 NCSYers from the Atlantic Seaboard, New York and New Jersey regions with OU Chairman of the Board Howard Tzvi Friedman, after his address at the AIPAC Conference 2016 in Washington D.C. this past March. Mr. Friedman is at the center of the back row in front of the window.

This past March, 150 NCSYers from regions across the country gathered at the Washington D.C. Convention Center to attend the annual AIPAC Policy Conference. Representatives of NCSY’s National Board were also present, including National President Sarah Engel.

In addition to participating in AIPAC’s itinerary, NCSYers had the opportunity to learn about the Israel-US relationship from Howard Tzvi Friedman, OU Chairman of the Board and former President of AIPAC, as well as from Maury Litwack, Director of State Political Affairs for OU Advocacy.

“It was a really fantastic to have our students spend time with Jewish leaders from all across the spectrum and to engage with thousands of others standing up for Israel,” says Rabbi Jonah Lerner, NCSY Regional Director, Atlantic Seaboard. “It is really important for our teens to understand the complex Israeli-American political relationship.”