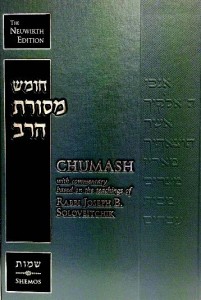 With commentary based upon the teachings of Rabbi Joseph B. Soloveitchik
Compiled and edited by Dr. Arnold Lustiger
OU Press

For those seeking the unique form of intellectual and spiritual enlightenment that Rabbi Joseph B. Soloveitchik, the Rav, represents, entry into the world of his teachings may seem to be a forbidding challenge. The existence of so many works containing the Rav’s teachings attests to the great esteem in which he is held; however, this abundance can also be daunting.

Chumash Mesoras HaRav: Sefer Shemos, The Neuwirth Edition, the second volume in this groundbreaking series compiled and edited by Dr. Arnold Lustiger, continues the project of making the Rav’s Torah readily accessible. This Chumash is an anthology of the Rav’s teachings drawn from dozens of published sources in Hebrew, English and Yiddish, as well as from many previously unpublished lectures, presented in elegant and concise English as a running commentary alongside the Chumash text. Significantly, the Chumash Mesoras HaRav presents the gamut of the Rav’s teachings, including not only philosophical insights, but also homiletic interpretations and Talmudic analysis. The Rav’s multi-dimensional character emerges from these pages.

Collecting the Rav’s teachings from their diverse array of sources makes them not only more accessible but transforms them into a timeless commentary. Take, for example, the following excerpt from a column the Rav wrote in 1954 for the Yiddish daily Tog Morgen about the interaction between Orthodox and non-Orthodox rabbis. In this Chumash, the Rav’s words explain the verse “And I will take you to Me as a people, and I will be a God to you” (Exodus 6:7):

The political-historical unity as a nation is based upon the conclusion of the covenant in Egypt, which occurred even prior to the giving of the Torah at Sinai. This covenant forced upon us all one uniform historical fate. The Hebrew word am, nation, is identical to the Hebrew word im, with. Our fate of unity manifests itself through a historical indispensable union . . . . The State of Israel did not ignore this unique fate; quite the contrary, it has given expression to it in a more concrete fashion. No Jew can renounce his part of the unity, which is based upon a fate of loneliness of the Jewish people as a nation. Religious Jews or irreligious Jews, all are included in one nation, which stands lonesome and in misery in a large and often antagonistic world.

The sixty years that have passed since these words were written have done nothing to diminish the acuity of the Rav’s perception. Yet if this example remains too depressingly true, let us also recall the Rav’s comments on the verse “For they were driven out of Egypt, and they could not tarry” (Exodus 12:39):

Genuine geulah, genuine redemption, always comes suddenly, unexpectedly, at a time when people are ready to give up hope. Sometimes historical situations keep deteriorating; people pray and cry, begging for mercy—but there is no answer to their prayer, only silence. At that moment, when the crisis reaches its maximum and threatens the very existence of the community, when people begin to give up, the geulah suddenly comes and takes them out of the land of affliction. It comes in the middle of the night and knocks on the door when no one expects it, when everybody is skeptical about it, when everybody laughs off the possibility of redemption.

The Chumash Mesoras HaRav: Sefer Shemos, The Neuwirth Edition, will no doubt become a classic companion to the book of exile and redemption. 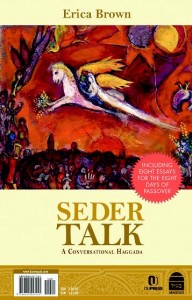 The Haggadah is certainly not a text lacking in commentaries, but Dr. Erica Brown nevertheless finds a fresh and original take. Her approach engages readers not only intellectually but emotionally, so readers will personally feel the experience of redemption. Toward this goal, Dr. Brown combines traditional commentary with analysis of art—the Haggadah includes numerous illustrations from renowned artists and from ancient Haggadot—as well as of poetry and literature. Instead of technical halachic explanations, she examines the experiential impact of the Seder. For example, Dr. Brown sees karpas, the dipping of the vegetable, as embodying the slave experience: “Hardly sated by our small potato, with our bellies asking for more food, we sit as slaves about to tell our story.”

In discussing the meaning of hospitality, she quotes sources from the Torah down to Zingerman’s Guide to Giving Great Service. And to understand the significance of the Four Questions, she cites the poet Rainer Maria Rilke: “Live the questions now. Perhaps then someday far into the future, you will gradually, without even noticing it, live your way into the answer.” This Haggadah, which includes questions to promote conversation, and eight essays for each of the days of Passover, may well help us achieve living our way to the answers.