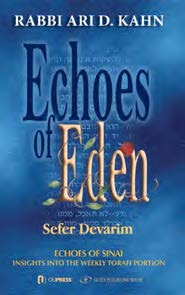 Each year on Simchat Torah, as we complete the reading of Sefer Devarim and begin again reading Sefer Bereishit, we celebrate. The Midrash derives this concept of celebrating the completion of the Torah from King Solomon, who celebrated upon attaining his unique level of understanding of the world. The cause for celebration upon the completion of the Torah is the new understanding we have gained, which can only be achieved with completion, with the comprehension which comes from seeing what previously seemed to be disparate segments as an integrated whole. Such new understandings and connections abound in Rabbi Ari D. Kahn’s Echoes of Eden series, which is now complete with the publication of Echoes of Sinai on Sefer Devarim.

Rabbi Kahn follows a midrashic approach in finding connections between far-flung portions of the Chumash, while citing a very broad range of sources in formulating his ideas. Thus, in a discussion of the eglah arufah, the calf slaughtered to atone for the discovery of a murder victim, we encounter in the course of a few pages not only the classic commentaries of Ibn Ezra and Ramban, Netziv and Malbim, but also lesser-known commentaries such as that of Rabbi Menahem Recanati, the thirteenth-century Italian kabbalist; Tzror HaMor by the Spanish exile Rabbi Avraham Saba; the esoteric anthology Yalkut Reuveni and Torat Ha’Olah, the philosophical work by Rabbi Moshe Isserles. Rabbi Kahn cites his sources in their original Hebrew and their English translations, making them accessible to the reader.

In the law of the eglah arufah, Rabbi Kahn finds allusions to the murder of Abel by his brother Cain, as well as to the episode of the golden calf. As in the traditional “hadran” in which one finishing a masechta connects its end to its beginning, Rabbi Kahn’s Echoes of Eden series demonstrates the understanding that comes with appreciation of the Torah’s integrity and interconnectedness–giving us all cause to celebrate.

In Madrikh La-Moreh, available in four Hebrew volumes on the tractates Berachot, Sanhedrin, Sukkah and Bava Kama, Rabbi Kenny Schiowitz, chair of the Ramaz Upper School Talmud Department, has compiled a curricular resource that addresses the challenge of teaching Talmud to high school students. Rabbi Schiowitz selects topics in each tractate, and on each topic, selects sources included in full, which are geared to provide important general knowledge, help develop Talmudic learning skills and respond to compelling basic and philosophical questions likely to intrigue high school students. Accompanying these sources are prefatory notes that explain the choice of material and how they can be used by students of varying levels. Rabbi Schiowitz has performed an important service for those involved in the critical arena of Talmud instruction. 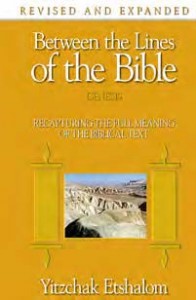 Between the Lines of the Bible: Recapturing the Full Meaning of the Biblical Text—Genesis (Revised Edition)

In the beginning, there was peshat. In Between the Lines of the Bible: Genesis, a revised and expanded edition of a book which has been unavailable for a number of years, Rabbi Yitzchak Etshalom argues for a return to focusing on the peshat, the “plain sense” of the text, and in so doing, he uncovers new solutions to questions for which the familiar answers are often taken for granted. Rabbi Etshalom’s contribution is not merely a fresh look at an ancient text, but a methodology that makes use of such diverse academic disciplines as literary analysis and archeology to discover the meaning of the Divine word. This methodology, which has emerged over the last generation primarily in Religious Zionist circles in Israel, offers an approach which is both traditional–many of its apparently new ideas are rooted in the approaches of the midrash and of medieval commentators–and also highly innovative, in its encounter with the text on its own, without preconceived notions.

Throughout the book, Rabbi Etshalom explains his methodological tools for examining the literary structure of a passage. What seem to be repetitions, for example, can be explained as multiple perspectives of the same event. In part, Rabbi Etshalom makes use of this approach to counter Biblical criticism. In one such case, following a close reading of the text, Rabbi Etshalom explains the apparent repetition of the story of the flood as containing two perspectives, corresponding to man’s dual nature as God’s partner in creation and as God’s servant. Throughout the book, Rabbi Etshalom introduces and explains many other literary tools that contribute to our understanding of the text. Between the Lines of the Bible is an excellent introduction to a new world of Torah commentary that is both highly original and deeply committed.