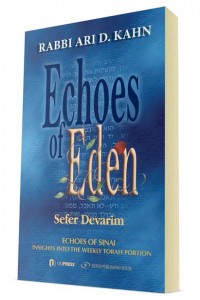 Sefer Devarim, as Rabbi Menachem Genack, CEO, OU Kosher, notes in his preface to this volume, is both the final book of the Torah as well as the beginning of interpretation of the Torah, the end of Torah Shebichtav but also the beginning of Torah Shebe’al Peh. Sefer Devarim, Moshe Rabbeinu’s poignant farewell address to the nation he helped bring into being, bears Moshe’s unique imprint as he looks back on the nation’s formative experiences in the desert and looks forward to its future in the Promised Land.

Echoes of Sinai, the fifth and final installment in Rabbi Ari Kahn’s Echoes of Eden series, calls attention to the ways Sefer Devarim retells, expands on and explains earlier sections of the Torah. For example, the retelling of the Ten Commandments in Sefer Devarim contains many discrepancies with the version in Shemot. The Ten Commandments of Shemot, explains Rabbi Kahn, speak from God’s own perspective, while the Devarim version represents Divine revelation from the human perspective. In Devarim, Moshe recounts the story of the spies, but this account differs in a number of subtle ways from the “original version” of the story in Bamidbar. Noting these nuances, Rabbi Kahn comes to a new interpretation of the entire story of the spies and ends with a methodological point: “The insight we gain from the book of Devarim is what makes Moshe our greatest teacher. As he retells our history and reteaches God’s word, he ensures that the deep philosophical and practical messages of the Torah with which he was entrusted are internalized. Only then does he step off the stage and allow the Jewish people to continue their journey.”

Rabbi Ari Kahn’s Echoes of Eden series, with its unique style of close reading and finding unexpected connections, deserves a place of pride in the libraries of every seeker of the messages Moshe Rabbeinu left behind for us. 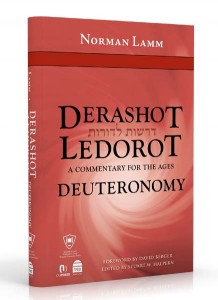 Thirty years ago, Rabbi Norman Lamm lamented the demise of the sermon (“Notes of an Unrepentant Darshan,” RCA Sermon Anthology, 1986). Unlike the shiur or lecture of the Talmudic scholar, the purpose of a sermon is not to explicate a difficult text or attain deeper understanding of a passage in the Talmud. The goal of the sermon is to awaken the religious sentiment of a community, to provide guidance in spiritual and moral questions and to address the issues of the day. A good sermon must do this and more—there is an art and a method to the sermon as well.

In the Deuteronomy volume of his Derashot Ledorot series, as in all the other volumes, we encounter Rabbi Lamm as an exceptional practitioner of this lost art. Although these sermons were delivered from the 1950s through the ‘70s, their messages remain remarkably pertinent today. (The historical backdrop of these sermons—whether it is Watergate or the Yom Kippur War—adds another layer of interest.) To give one example, in a sermon on Parashat Shoftim, Rabbi Lamm discusses the different views of monarchy, concluding with the following timeless and relevant lesson:

For Judaism, God is not an Executive Vice President of the Cosmos in charge of Human Happiness. A truly religious person does not wake up in the morning and say to God, “What have you done for me recently?” God is not looking for our votes in an election or popularity contest. He is not interested in our approval. An authentic religion does not cater to what people want and think they need. It teaches them to want what they really need. It leads them to aspire to higher deeds and more sublime ideals. If Judaism may be cut and truncated and transformed and reformed to conform to the latest ephemeral intellectual currents and fads of fashions and tastes, then it reveals that at the bottom there is an immature conception of God as a kind of divine Servant or at best a divine Insurance Agent who will provide for our happiness and convenience. God is not a King for us; He is a King over us. “You shall set over yourself a King.” That is the essence of Torah and the meaning of halachah.

If, as Rabbi Lamm argued, “A good sermon, like a mitzvah, begets other good sermons,” then perhaps the model of Derashot Ledorot will create a sermon renaissance. Regardless, we will have Derashot Ledorot to guide and inspire lay people and rabbis alike.