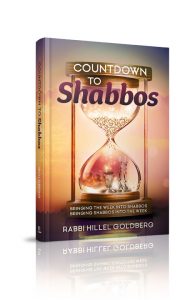 Countdown to Shabbos: Bringing the Week into Shabbos – Bringing Shabbos into the Week
By Rabbi Hillel Goldberg
OU Press

With one eye on this world, as a newspaper editor and another eye on eternity, as the author of pioneering works on Jewish spiritual heroes, Rabbi Hillel Goldberg in his Countdown to Shabbos describes how Jews can connect this world to the next through the medium of Shabbos. Countdown to Shabbos demonstrates how we can transform our lives by bringing Shabbos into the week, and the week into Shabbos.

Shabbos may be seen as a one-day-a-week respite, and a glorious one at that; or Shabbos may be seen as the day that both colors the rest of the week and constitutes the week’s yearning and anticipation. In the richness of the Hebrew, a “shomer Shabbos” denotes not only a “Shabbos-observant” person, but a “Shabbos-anticipant” person. The Jew who is able to tap into the deepest layers of Shabbos is not only Shabbos-observant, but Erev Shabbos-observant . . . Besides the practical ways that facilitate the beginning of Shabbos’ descent on Erev Shabbos, to be a Shabbos-anticipant means something much more. It means an entire change in mindset. It means internalizing that Shabbos is not just an escape from, but a flight to; not just an end to the difficulties of the week, but a window to the Divine.

Countdown to Shabbos contains seven chapters, each relating to one of the themes of Shabbos represented by the numbers one to seven. Within the pages of one compact book, Rabbi Goldberg combines scholarship and spirituality to ably convey the transformational message of Shabbos, which is as relevant in today’s world as it ever was. 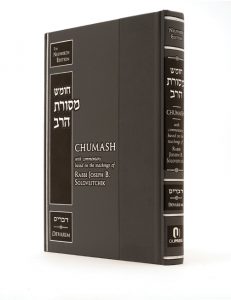 In the fifth and final volume of Chumash Mesoras HaRav, Dr. Arnold Lustiger has once again performed the feat of assembling the multifarious teachings of the Rav, Rabbi Joseph B. Soloveitchik, into a seamless commentary alongside the Chumash text. As always, the Rav’s commentary illuminates the text with both his halachic insight and philosophical acumen.

Sefer Devarim comprises Moshe Rabbeinu’s farewell address to the Jewish people. The Rav captures the poignancy of Moshe’s parting words upon his failure to achieve entry into the Promised Land:

When he was told that he would not enter Eretz Yisrael, Moses pleaded for forgiveness. Had the people joined him in prayer, the Holy One would have been forced to respond. But they did not join. Thus, we read that with tears in his eyes Moses tells them, “Va’eschanan,” I prayed alone . . . I was a lonely, solitary prayerful person; I prayed, no one else joined in with me. But God became angry and did not listen to me “lema’anchem, because of you.” Moses did not enter Eretz Yisrael because instead of addressing the rock, he hit it. It was not the fault of Am Yisrael that Moses made a mistake. But had the people possessed the sensitivity and love for Moses similar to that love that Moses felt for them, they would have torn the decree into shreds. It was their fault.

But the tragic death of Moshe also marks the beginning of a new era for the Torah and the Jewish people. Throughout the course of the commentary, the Rav returns to the unique quality of Sefer Devarim to explain a number of features of this final book of the Chumash. Following in the path of the Vilna Gaon as well as many Chassidic masters, the Rav sees Sefer Devarim as an intermediary between the Written Torah (Torah Shebichtav) and the Oral Law (Torah Sheb’al Peh). With Moshe’s demise we lost an unmediated connection to God, but gained an alternative route to Divine instruction through the Torah Sheb’al Peh.

The Chumash Mesoras HaRav on Sefer Devarim, as well as the now completed series as a whole, brings readers the teachings of an undisputed master of Torah Shebichtav and Torah Sheb’al Peh. This work is sure to endure for generations as a classic companion to the Chumash.