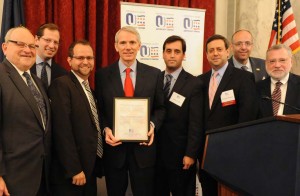 OU Advocacy brought 120 national and congregational leaders to Washington in June to advocate for key domestic and international concerns, including the Nonprofit Security Grant Program, which assists nonprofits, such as synagogues and day schools, in making their buildings more secure; the proposed Nonprofit Energy Efficiency Act, which will help nonprofits make their buildings more energy efficient; the nuclear negotiations with Iran and the advancement of Israel’s security.

During the mission, the delegates—who represented nine states—heard from Israel’s Ambassador to the US Ron Dermer and met with White House Chief of Staff Denis McDonough. They met in small groups with thirty members of Congress, including Democratic Whip of the US House of Representatives Steny Hoyer, and were joined by several US senators during a luncheon in the Senate.