When the popular Mount Sinai Jewish Center in the Washington Heights section of New York wanted to reach out to affiliated and non-affiliated Jews in the area, it turned to the Orthodox Union.

“We decided to get involved because there are thousands of Jewish young professionals in the Heights,” says Rabbi Dave Felsenthal, director of the OU’s NextGen Division. “But the majority aren’t connecting anywhere. At Mount Sinai’s request, we decided to partner with them and help the unaffiliated and uninvolved Jewish young professionals connect to a dynamic Jewish community.” 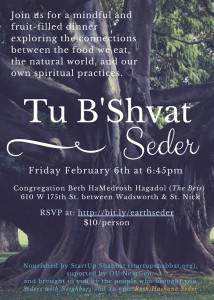 NextGen reached out to Hart Levine, the director of Heart to Heart, a grassroots organization dedicated to promoting religious Jewish life on college campuses that is funded by the OU. Levine, who, together with his wife, Yael, lives in the Heights, had already been running assorted programs for Jewish professionals in the area.

“My neighbors and I all belong to the main shul in the neighborhood, but a lot of people weren’t a part of it or tapped into it,” says Levine. Eventually Levine and his neighbors began organizing events and Shabbat meals together. “It began as a handful of people and then grew to twenty to forty people at each event. We were looking to see what the next step was going to be and then the OU approached us.”

With the OU’s support, Levine launched Open Up Washington Heights, an informal group composed mainly of volunteers who work to build a sense of community among the varied Jewish residents of the Heights. The program director is currently Lily Lozovsky. 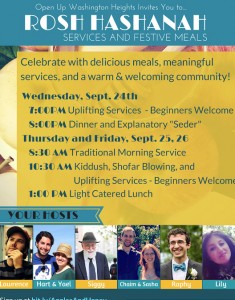 “There was really just a void,” explains Levine. “People graduate college where they have the OU-sponsored Heshe and Harriet Seif Jewish Learning Initiative on Campus (JLIC), but until they settle down and marry, there’s this gap. Who’s reaching out to them and making sure they’re doing okay? It’s a hard stage, and people get lost through the cracks.”

Levine and neighborhood volunteers began organizing more Shabbat meals, shiurim and Jewish events. They contacted an older synagogue in the area, Congregation Beth Hamedrosh Hagadol of Washington Heights. The shul had recently fallen on hard times and the year before didn’t manage to have a minyan for Rosh Hashanah. Open Up Washington Heights set up tables on the street where volunteers handed out flyers and apples and honey in honor of the Jewish New Year. More than 150 people visited the shul during the holiday, a third of whom were unaffiliated. Rosh Hashanah was just the beginning for the group, and they’ve broadened their programming to run monthly Shabbatons, events and even Pesach Sedarim.