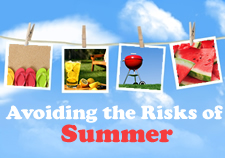 The Catskills! About as close to Gan Eden as we can get! Fresh mountain air, no congestion, wide open spaces. We can hardly wait for those summer months.

But during these months, parents must remain vigilant. The danger is two-fold: What a child may do and what may be done to a child. I have heard it all: “My child is a yeshivah boy”; “My daughter is a wonderful frum girl.” The greatest danger is a false sense of security, and our greatest protection is being aware of the dangers.

Don’t delude yourself. A yeshivah boy can be approached by someone saying, “Try this. It gives you a good feeling.” Youngsters do not have mature judgment and may not know about drug abuse. Drugs make them feel good, so why not? No one has ever alerted them to the dangers. They may have their first experience with marijuana; if they like it, they may try it again. This could lead to frequent drug use. Similarly, gambling can produce a thrill. Some parents may view kids gambling as innocent fun. But this kind of “fun” can quickly get out of control, and can cause youngsters to steal.

Of course, problems can occur year-round—but at least there are some deterrents when children are at home in the city. During the school year, children tend to stay in their frum neighborhoods, and most of the time are either with their teachers or parents. Their time is occupied with their studies. In the summer, however, kids are free to roam about, and they may have plenty of unsupervised spare time.

As we witness with alarming frequency, even in the Orthodox community, there are predators who molest children. Some of the predators appear to be fine people—they could even be one’s relatives—whom no one would ever suspect of doing anything wrong. Moreover, children may trust them. But the majority of molestation cases remain hidden. Most children never report these incidents to their parents; they feel guilty about them and are afraid they will be punished. Sometimes the predator threatens the child, making him fearful of divulging what happened.

Last summer, on a Shabbos afternoon in July, a “frum” youngster was caught drunk driving. He crashed into a bungalow and then tried to flee the scene on foot. Some may ask, How can this happen? The fact is, it did happen, and things that we never imagined could and do happen.

Alcohol is available everywhere, even in the finest camps. Sixteen-year-old kids will often ask unsuspecting adults to buy beer for them, claiming their parents asked them to get it for oneg Shabbos or a melaveh malkah meal. Teens foolishly think they can handle two beers and that drinking is “cool.” But even a little alcohol can cause them to act thoughtlessly and recklessly.

Children may develop a tolerant attitude toward alcohol by emulating their parents. It’s one thing to have a lechaim at Kiddush; it’s quite a different matter when a child sees his father having several bourbons at the Shabbos table.

The single most effective way to prevent these various dangers is open communication with children. Many children are reluctant to tell things to their parents. I was the victim of a bully in elementary school and I never told my parents. I haven’t the slightest idea why I didn’t. Children should know that they can tell their parents everything, and that they will not be blamed for what they share.

Because of the prevalence of drugs, it is important for parents to educate themselves about them, even to the point of knowing the street names of common drugs. They should also know the signs of drug use. Free literature is available at any drug treatment center. If parents suspect their child may have used a drug, they should contact an expert on drug abuse for guidance.

There are also books available on how to talk to young children—yes, even to five-year-olds—about good touch and bad touch, and the importance of telling daddy or mommy if they have been touched improperly.

Finally, children in camp should not be given cell phones. Cell phones permit campers to be in contact with people off campgrounds in a manner over which parents have no control. If it is really necessary for your children to get in touch with you, they can use the camp phone.

At all times, though especially in the summer, parents should know where their children are and with whom they are associating. Ask your children about their day, not as an interrogation but as an expression of your interest. If your children see that you are genuinely interested in what they have to say, they will be more likely to share their thoughts with you. Keeping alert and having open communication with your children will enable both you and your children to have a happy, worry-free summer.

The founder and medical director of Gateway Rehabilitation Center in Aliquippa, Pennsylvania, Rabbi Abraham Twerski, MD, is one of the country’s leading experts on drug and alcohol rehabilitation. He is the author of numerous books, including Dear Rabbi, Dear Doctor (Brooklyn, 2005) and From Pulpit to Couch (Pittsburgh, 2005). His column is regularly featured in Jewish Action.