Most converts spend years on a spiritual trek and finally find their place in Judaism. Are we welcoming enough?

One of the most oft-repeated mitzvot in the Torah is that of loving and caring for the ger, a person who has converted to the Jewish faith. In fact, the Ba’alei Tosafot (Kiddushin 70b, s.v. kashim) note that this requirement appears in the Torah either twenty-four, thirty-six or forty-six times (depending on how you count) in a variety of different contexts. There is a heightened obligation to demonstrate compassion toward a convert because, as the Torah repeatedly reminds us (Shemot 22:20, 23:9, Vayikra 19:34, Devarim 10:19), we were all geirim, or “foreigners,” in the land of Egypt and therefore we should have compassion for others who have joined us from foreign nations.

At the same time, certain limitations are placed upon converts. For instance, a Kohen is not allowed to marry a female convert (Even Haezer 6:8). Converts are not permitted to serve as dayanim (Jewish law judges), except in limited situations (see Yevamot 102a, Choshen Mishpat 7:1). Additionally, it is generally prohibited to appoint a convert to a position of public authority (see Kiddushin 76b).

Nevertheless, Rabbi Moshe Feinstein, zt”l, writes in his responsa (Yoreh Deah 4:26) that the commandment of loving a convert requires the community to search for leniencies in terms of appointing worthy converts to positions of prestige in a way that would not violate the technical interdiction against appointing converts to positions of public authority. On this basis, he permits a convert to serve as a rosh yeshivah, arguing that (a) being a rosh yeshivah is not really a position of public authority, because there is only internal authority over students and teachers, but not over communal members; (b) when there is nobody else as worthy as the convert for the position, the prohibition is not applicable (this argument is also found in the Tashbetz, Magen Avot 1:10, and Minchat Yehudah, Parashat Mishpatim, in the name of the Ba’alei Tosafot with respect to the appointment to the Sanhedrin of Shmaya and Avtalyon, according to the opinion that they were converts); and (c) the prohibition is not applicable to the convert himself in the event that the community chooses to appoint him to a particular position.

We must raise our sensitivity in reaching out to the converts in our midst with compassion and love and making them feel completely accepted.

Based on some of these considerations, Rabbi Asher Weiss (Minchat Asher, Bereishit no. 71) rules that a convert could even be appointed rabbi of a synagogue if the community members all agree upon accepting him to serve in that position. Rabbi Dov Aaron Brisman, av beit din of the Beit Din of Philadelphia, penned a similar responsum (Shalmei Chovah, YD 47) in which he concluded that a convert can be appointed president of a synagogue if final decisions are fundamentally made by the synagogue board rather than in unilateral fashion by the president (although Rabbi Aaron Felder, zt”l, expressed an opposing view in She’eilat Aaron 2:10).

Additionally, Rabbi Chaim Kanievsky rules (Netzach Yisrael 2:145) that there is a mitzvah of “loving the convert” in the context of a marriage relationship with a convert. Some of the rabbis involved in conversion in North America have taken upon themselves the task of serving as a “shadchan” to individuals whom they converted, ensuring that the converts are fully acclimated into communal life by finding a suitable shidduch. On that note, my wife and I have, b’ezrat Hashem, successfully matched two recent converts from our community with their life partners, and we joined both couples in celebrating the brit milah of each of their firstborn baby boys.

But unquestionably there are challenges. The Talmud (Yevamot 48b) mentions that converts often have a difficult time in their adjustment period. One convert commented to our beit din that some people seem to feel that the types of personal questions that are inappropriate when posed to other people (regarding their personal lives or level of observance) become fair game in the context of conversations with converts. This is not acceptable, either on an individual level or a communal level.

Rashi comments (Vayikra 19:34) that when the Torah reminds us that “we were converts in the land of Egypt,” it is telling us that we started out in the same predicament as new converts to Judaism. Indeed, the Talmud (Keritut 9a) recounts that the entire Jewish people went through the process of conversion at Mount Sinai. The Gemara (Shabbat 146a, see Rashi ad locum) further relates that all individuals who were destined to become converts throughout the generations had some type of spiritual presence (“mazlayhu havu”) at Mount Sinai when the Torah was given. It is important to underscore that one who has undergone a valid conversion procedure is every bit as Jewish as one who was born Jewish.

One of the key discomfitures that converts face is being questioned about the validity of their conversion. This inquiry can also afflict children or grandchildren of women who have previously converted to Judaism, and whose progeny rely upon their matrilineal descent for validation of their own status. This is one of the reasons why the Rabbinical Council of America, in conjunction with the Beth Din of America, created the GPS network of participating rabbinical courts for conversion throughout North America. The GPS network has produced protocols to help ensure a valid conversion process, providing converts with a comfort level that their conversions will be accepted by the Chief Rabbinate of Israel and around the world.

Some people seem to feel that the types of personal questions that are inappropriate when posed to other people become fair game in the context of conversations with converts. This is unacceptable.

The GPS system has proven itself strong and vital enough to be able to repair and rebuild when necessary, and to become a better and more effective force for good on behalf of the Jewish people. The recent hire of Rebbetzin Abby Lerner to serve as the national director of conversion services is just one example of how steps have been taken to ensure that conversion candidates have the necessary resources to voice any concerns in terms of their experiences. Along these lines, the Midrash (Ruth Rabbah 2:17) derives from the verse in the book of Iyov (31:32) “Bachutz lo yalin ger—a ger would not be made to lodge outside,” that it is necessary to take steps to embrace and encourage a sincere convert throughout the entirety of the conversion process. Having a strong system of conversion courts in place helps to fulfill that mandate.

There is a striking statement in the Talmud (Yevamot 46b) in the name of Rabbi Chelbo that “converts are as problematic for the Jewish people as a wart in the skin.” Tosafot (Kiddushin, ibid.) offers several explanations to this quixotic quotation, ranging from the concern that converts may sometimes be less knowledgeable and therefore less observant in the performance of mitzvot, to the observation of Rabbi Avraham HaGer that converts make others look bad due to their heightened level of mitzvah observance and commitment. Ultimately, the trajectory of a convert, like that of each member of the Jewish nation, can go in either direction, but much depends on the love and support he or she receives from the community. On some level, “it takes a village” to raise up a convert.

Perhaps this sense of communal responsibility is why the Tosafot, in an alternative explanation, states that the greatest pitfall with respect to converts is the difficulty of avoiding the numerous prohibitions against causing a convert any distress. We must raise our sensitivity in reaching out to the converts in our midst with compassion and love and making them feel completely accepted.

Today, many of the most active members of any Jewish synagogue, community or institution are converts or descendants of recent converts. It is instructive to bear in mind the words of Avraham Avinu (Bereishit 23:4) who described himself, when he was interacting with the Bnei Chet, as “Ger ve’toshav anochi imachem—I am both a foreigner and a resident among you.” Along similar lines, we are all part of the magnificent mosaic of worldwide Jews from different origins, backgrounds and cultures—insiders who have come from the outside. By respecting and honoring each member of our Divinely inspired nation as part of a unified whole, we will truly serve as an Or L’amim—a beacon of light to the multifaceted and multicultural world around us. 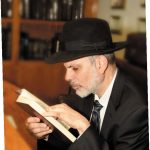 Courtesy of the Chicago Rabbinical Council

Also in this section:

Up Close with Abby Lerner by Yehudit Garmaise

Jews By Choice by Barbara Bensoussan