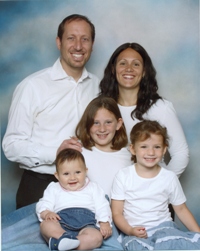 Mention Edmonton, Alberta, and what comes to mind? The very name evokes a shiver, conjuring images of blizzards and bitter cold. Some may recall that the world’s largest mall is located within its city limits. But Edmonton as the center of a vibrant Jewish community? No one would have thought it—that is,
not until the arrival of Rabbi Daniel Friedman.

“Around here they say that the weather is cold but the people are warm, and I’ve definitely found it to be true.”

Moving to a city where temperatures in the winter typically dip to twenty-five degrees below zero—and lower—is no small adjustment for a man who hails from balmy Sydney, Australia. “It took a couple of years to get used to the weather,” says Rabbi Friedman, who has been in Edmonton for almost eight years and who began a shul tradition of serving hot chicken soup to Friday night worshippers. “But around here they say that the weather is cold but the people are warm, and I’ve definitely found it to be true. People have been extremely welcoming and generous to us.”

The Lay of the Land
Edmonton has a Jewish population of about 5,000, and about 1,000 of those are affiliated with an Orthodox synagogue. When Rabbi Friedman first arrived at the age of twenty-six, the Orthodox community was on the decline. The kollel had dwindled to one lonely participant; there was a small Chabad house; and the shul he had been asked to lead, Beth Israel, was like an anemic patient waiting for a shot of iron—the young people were drifting away, and membership was dwindling. The larger Jewish community also included Conservative and Reform synagogues, but none of these entities were on speaking terms with one another.

“For the previous fifty years, Beth Israel had been switching rabbis about every two to three years, on average,” says Rabbi Friedman. “People didn’t have a good taste of Orthodoxy in their mouths, and the Orthodoxy that was there was not inspiring or dynamic,” he says. “There was some ill feeling towards Orthodoxy—it was seen as divisive.”

“It was a community in need of healing,” says his wife, Batya, who grew up in Brooklyn.

It didn’t take long for Rabbi Friedman to hone in on his mission. “I set out with the goal of showing the community that Orthodox Judaism is not a dinosaur,” he says. “On the contrary, I wanted to show that it is the wave of the future for the Jewish community. But first I had to get the different factions to re-establish communication with each other. ”

Life in the Small City
Isn’t it tough for two people raised in big cities to adapt to small-town life? “There are compensations for the cold weather and smaller community,” says Rabbi Friedman. “It’s not a rat race here. We enjoy the warmth and the slower pace of a small community.”

But there are downsides to the Friedmans’ life in Edmonton. For one, both their families are far away. Rabbi Friedman’s parents only visit from Australia about once a year, and Batya’s parents, who live in New York, try to come twice a year for yamim tovim. The transition seems to have been harder for Batya. “I loved New York,” she says. “The activity and energy give you a high. But I eventually learned that, contrary to popular belief, there is life outside of New York!”

The hardest part of the move, Batya confesses, was when the Friedmans first arrived. With no job, friends or family, Batya was completely dependent on her husband. “There were times I thought about leaving,” she says. “It took time to find my place. But baruch Hashem, eventually Edmonton became ‘home.’”

Batya began to settle into her new city. A financial analyst, she found a job in her field. She also started a few initiatives at Beth Israel such as “Ima and Me” programs, Bat Mitzvah classes and a women’s shiur. Today, Rabbi Friedman says she has “three full-time jobs”—akeret habayit (homemaker), banking professional and rebbetzin—which require more than a few different hats.

What about the Friedman kids? “Although they’ve visited larger communities, they’re used to this life,” Batya says. “We take in a lot of Shabbat guests, and the kids love it. We tell them they’re lucky to be able to teach their peers and serve as an example. So far, they see only the benefits of being the rabbi’s kids.”

Big City, Born and Bred
Rabbi Friedman earned his semichah in Australia. He had lived in both Sydney and Melbourne, and served as a pulpit rabbi for two and a half years. He then moved to New York City to pursue a master’s degree in Jewish history at Touro College, simultaneously serving part-time as the rabbi of Congregation Beth El in Long Beach, New York.

During this time, Rabbi Friedman met Batya, who, by her own admission, “never wanted to leave the big city or marry a rabbi.” She attended Brooklyn College, where she earned a degree in mathematics. Despite her initial misgivings, today she has transformed into, in her husband’s words, “a wonderful rebbetzin and my partner in every respect. . . . The community is thrilled with her.”

Rabbi Friedman was looking to get back fully into community work when he was contacted by Yeshiva University. “It was supposed to be a two-and-a-half-year stint [in Edmonton],” says Batya. “It wasn’t an easy adjustment for me—the weather, being far from family, not having a life of my own at the beginning,” she says. “But I saw that my husband wasn’t completely whole until he started this work—it so obviously made him come alive. And we saw results that were so gratifying, as the community grew so much stronger under his leadership—so much more positive and vibrant.”

A Jew is a Jew
Color-blind people have a definite disadvantage when it comes to matching suits with ties. But Rabbi Friedman has a different kind of blindness: he manages to look beyond every Jew’s origin, affiliation and political views, focusing solely on how he can bring him or her closer to Torah. This quality is what has contributed to his success in Edmonton.

For example, he has launched community-wide initiatives that reach across all “party” lines, such as leading the entire community to participate in the National Jewish Outreach Program’s “Shabbat Across America” project. During the Gaza War in January, he organized a prayer vigil for Israeli soldiers. “The Israelis in the community, many of whom usually never set foot inside a shul, came out in droves,” says Rabbi Friedman. “We were all united in our prayers and our support for Israel.”

Rabbi Friedman makes it his business to get involved with just about every Jewish organization in town. Creative community events like river cruises on Lag B’Omer and pre-Shabbat sports events and barbecues in public parks help draw the community together.

By buttressing the kollel, Rabbi Friedman managed to benefit the larger community as well. He helped recruit about half a dozen men and their families to join the kollel and engage in outreach via the Ner Le’Elef Institute, a program that trains kollel men to become kiruv professionals. “Rabbi Friedman has really helped the kollel grow,” says Rabbi Refael Hassan, the rosh kollel. “He has promoted us in his shul and in the community.

“We work on many things together—kashrut in the community, finding a youth director, running the school; for a long time, we worked as one unit. At this point the kollel and Beth Israel can each stand on its own feet, but we continue to work together,” he says.

Building Up Beth Israel
The core of every synagogue is its capacity to connect Jews to Torah, and Rabbi Friedman has worked hard to inspire his congregants. “Rabbi Friedman made me observant,” says Gordon Bushewsky, a retired teacher. Bushewsky recounts that his father moved to Edmonton in 1930 and joined Beth Israel, which was founded some hundred years ago. He himself stayed away until his mother passed away. “I learned that the rules of Judaism have reasons behind them, and that following them could actually be enjoyable,” he says. He went from being a High Holidays-only attendee to being gabbai of the synagogue.

Rabbi Friedman has worked to resuscitate the shul’s ties to the larger Jewish world by renewing its affiliation with the OU and its teen movement, NCSY. He is currently building up a youth program and is working on establishing an eruv. This spring, the shul’s new mechitzah was unveiled, and the congregation hosted Israeli Chief Rabbi Yona Metzger and Av Beit Din of the Beit Din of America Rabbi Gedalia Dov Schwartz for the ceremony.

All the More Reason . . .
When the Friedmans arrived in Edmonton, it was a kosher desert, without a single pizza shop. Today, due in part to Rabbi Friedman’s encouragement, the town boasts two kosher restaurants, a kosher bakery and three (albeit part-time) kosher caterers. The local supermarket, which had always stocked kosher food, now employs a full-time mashgiach.

As education is vital to growing a community, Edmonton has two Jewish day schools. In 1977, Talmud Torah, the non-denominational community day school, received charter school status from the Edmonton Public School Board; it is therefore able to keep tuition to about $4,000 Canadian. Menorah Academy (attended by Rabbi Friedman’s children) keeps its tuition to a minimum in order to remain competitive with Talmud Torah.

Into the Future
Rabbi Hassan says that the challenge in Edmonton today is for its leaders “to keep the momentum,” to refuse to rest on their laurels. But after almost eight years of intense community work, Rabbi Friedman shows no signs of slowing down. His family has gotten used to the way of life. The bitter cold and the isolation from larger Jewish centers have become facts of life, rather than insurmountable obstacles.

“I believe what the Chofetz Chaim said about giving oneself to Torah causes,” Rabbi Friedman says. “The more you are moser nefesh for Torah, the less worries and issues you will have in other areas, be it money, health or childrearing. We believe God wants this from us, and will repay us in kind. We’re honored to be doing this.”

Barbara Bensoussan has worked as a university instructor and a social worker, and currently writes for Jewish newspapers and magazines. Her most recent novel is A New Song (Southfield, Michigan, 2007). She lives with her husband and six children in Brooklyn