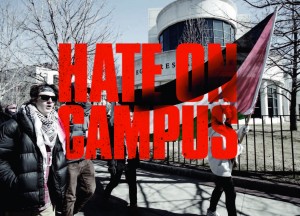 In February of 2013, when I was a graduate student at Brooklyn College, my campus hosted Omar Barghouti, a founding member of the Palestinian Campaign for the Academic and Cultural Boycott of Israel (PACBI) and Boycott, Divestment and Sanctions (BDS) campaign. It was a contentious event that ultimately divided groups on campus. One issue was that the Political Science Department was cosponsoring the event, which signaled to students that the ideas presented had the administration’s seal of approval. The Department denied that it was condoning one view over another, despite its nominal backing of the event that provided only one extreme viewpoint of the complex modern Israeli-Arab situation.

Fresh off a trip to Israel and eager to get involved with Israel advocacy on campus in whatever small way I could, I attended the event.

When the event’s organizers, a student organization called Students for Justice in Palestine (SJP), realized that my friends and I intended to question the speaker during the Q&A period (they discerned this from the fact sheets we had brought along with us), they had us removed by campus security on the later-disproven grounds that we were being vocally disruptive.

After a lengthy interrogation process, representation from two separate law offices and a year of back and forth, we managed to wrangle an apology from the administration.

Since I had grown up in a relatively insular New York Jewish community, this was the first time in my life that I experienced true discrimination based solely on the fact that I was Jewish and supported Israel.

When I return to the Student Center at Brooklyn College and walk down the same six flights of stairs where two years earlier campus security hauled me away, I feel a stark difference. There is a foreboding feel to the place. I did not sense this as an undergraduate student when I came to campus simply to take classes and go home, without getting involved in politics, student clubs or advocacy of any kind. But now I was targeted—not only by those students who decided to silence me, but by the administration itself.

Unfortunately, my experience is not unique; many Jewish pro-Israel students face hate and bigotry on campus.

Jess Lieberman knew that Jewish life on campus would be fairly limited when she applied to Kenyon College, a small liberal arts school in Ohio, to study English. “I figured I’d create the Jewish life on campus that I needed if it wasn’t there already,” says Lieberman. “I didn’t realize how much anti-Israel sentiment there was. In my second week of school, I already heard students calling Israel an apartheid state in classes, and my jaw just dropped.”

From there things didn’t get much easier. “Kenyon is a place where people pride themselves on being open and talking about each other’s perspectives, but the discussion about Israel was just the opposite.” On trips to the campus dining hall, Lieberman would encounter “apartheid walls” and receive pamphlets entitled “Everything You Need to Know About the Israel-Palestinian Conflict” containing what she calls “the most biased information on the situation.”

“No mention of Israelis that were killed, no historical context. I was the only one talking against them and there were fifteen of them yelling at me,” she says. “Even a professor joined in. A professor was yelling at a nineteen-year-old student. Kenyon isn’t even known as a very political campus, but this topic was so fetishized.

I was a young student, feeling isolated. It was a horrible place.”

This is something that students face right off the bat in their college years in smaller colleges like Kenyon to larger better-known universities like UCLA, NYU and Harvard.

“They make students feel like they’re under attack, as if there’s a problem with being who they are,” says Rabbi Akiva Weiss, an educator for the Heshe & Harriet Seif Jewish Learning Initiative on Campus (JLIC) at Binghamton University. JLIC is the Orthodox Union’s program, in partnership with Hillel, that helps Orthodox students navigate the college environment. “Students shouldn’t have to prepare themselves for a fight when they go into a class. Frankly, students feel bullied.”

Rabbi Aryeh Kaplan, a JLIC educator at UCLA, where a student-led BDS resolution was passed during the fall 2014 semester, sees similar patterns. “Students come to me and ask ‘Why is it that we feel alone?’ It’s not all the time, but I started seeing it more recently.”

Jacob Binstein, a recent graduate of Rutgers University in New Jersey, was already drawn into the fight during his first month as a student. “There was a table set up by a group called Belief, Action, Knowledge, and Awareness BAKA). When I approached the table to talk to them, they immediately started yelling at me. They asked me how many Palestinian babies I killed. You can really be intimidated by the volume.”

“I didn’t realize how much anti-Israel sentiment there was. In my second week of school, I heard students calling Israel an apartheid state in classes, and my jaw just dropped.”

Later that year, the same students who yelled at Binstein for killing babies organized an event comparing events in Gaza to the Holocaust. “We organized a counter protest and we had about 300 people wearing t-shirts that said ‘Don’t Politicize the Holocaust’ on them,” says Binstein. “When they saw the crowd in the lobby, they started only letting members of their own group in. If you looked Jewish they pretty much turned you away.”

After that, BAKA was forced to stop its activity at Rutgers because of the discriminatory incident. Only a year later SJP came in to take its place as the anti-Israel voice on campus.

Chaim Grafstein faced the same vitriolic intimidation during his first weeks at the University of Toronto. “The moment you go over [to talk to them], they start screaming. There’s no dialogue.”

Physical threats are common as well.

“There was a pro-Israel student who wrote for the school paper. He suffered verbal attacks all over campus and was threatened physically,” says Rabbi Weiss. “He reported the threats, but nothing was done.”

Another Brooklyn College student, Melanie Goldberg, was told by SJP members that she should “watch her back” on campus.

“When your case is weak, shout louder,” goes the old lawyer’s adage, and groups like SJP and their anti-Israel cohorts have been using that strategy for years. “Anti-Israel groups scream ‘From the river to the sea,’ and that’s that,” says Binstein. “They don’t want to hear about history or international law or borders and so we have a choice: we can slink back and retreat, yell back at them or try to provide a voice of reason.”

Hillel Burstein, a student at Brooklyn College, once attempted a dialogue with the college’s SJP chapter and was denied flat-out. “I sent an invitation to the president of SJP as the vice president of Students United for Israel to an event featuring Ishmael Khaldi, a Bedouin-Israeli diplomat. She rejected the invitation on the grounds that she doesn’t maintain relations with Zionist groups. I wasn’t asking her to sponsor him. She was unwilling to just come and hear his perspective.”

The atmosphere that allows for this intimidation to go on, for the perpetrators to continue uninhibited and unabashed, is something that we, as members of the larger Jewish community, must work to change. But how do you deal with hatred? How do you open dialogue with people who want only one side of the story to be heard and who will attack, verbally and physically, anyone who brings evidence contrary to their point of view?

Some students on campus have had success fighting back and the key, it seems, is to respond quickly from a strong, unified and vocal Jewish campus community. “We have to deal with our share of rallies, protests and events,” says Tracy Frydberg, a student at the University of Texas at Austin and president of the student group Texans for Israel. “Occasionally we hear of certain isolated incidents escalating, such as ‘Apartheid Week,’ the push for BDS. But Jewish students on my campus are a very strong community. Responding to BDS and anti-Israel sentiments comes from one united front.”

Rabbi Kaplan says that strategy has been effective at UCLA as well. “I wish I had a magic answer, but the Hillel and the JLIC and Chabad on campus work together to create a good environment for Jewish students. Bruins for Israel is another group that promotes Israel very strongly on campus.”

Students on campus who have problems with anti-Israel and anti-Semitic sentiments preached openly and violently can’t back down. Rabbi Weiss agrees. “Do not back down. Don’t be afraid. It’s a horrible reality because students don’t like confrontation, but when you back down, you allow them to advance.”

It’s easy for students and even administrators to not get involved out of fear of threats and intimidation. Many undergraduate students, including me at one time, don’t want to throw themselves into a situation in which they’ll be verbally accosted and threatened.

“More than one student has told me that they wanted to stand up but they were afraid of getting yelled at,” says Binstein. “They’d rather keep their heads down.”

Therein lies an important part of this equation. I was the type of student who kept his head down almost to the point of apathy as an undergraduate. It took being forcefully removed from a building because of my support for the Jewish State to realize that keeping your head down doesn’t work. Going to campus just to get good grades and your degree isn’t enough.

“Change the conversation,” says Grafstein. “Speak with any student you can, share your ideas and most important, don’t back down. Don’t be apathetic. Be proactive.”

The future leaders of the world will come from these campuses, and we cannot allow the loudest voices on campus to be the only ones heard. But it will take educated and informed students who will campaign for Israel with passion and fervor despite the intimidation.

Ari Ziegler is a program associate at the OU’s NextGen Division and a group leader for OU Israel Free Spirit. He is also a novelist working on publishing his first two books.