Concerned that “Orthodoxy was diminishing in America,” a group of high-profile lay leaders came together to strengthen Orthodox Judaism and increase its role in the larger American Jewish arena.

The influential society was short-lived. Its surreptitious operations went undetected and probably would have remained that way if Rabbi Jung’s grandson, Ezra Rosenfeld, hadn’t found copies of the Ben Yephuneh meeting minutes among his grandfather’s files. These documents reveal much about the agenda of postwar Orthodox Judaism. It also highlights the oft-overlooked role of laypeople—in favor of rabbis and schools—to execute change in American Jewish life. 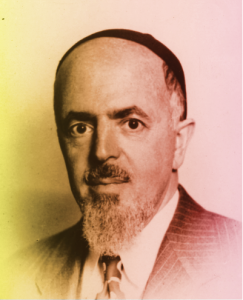 Rabbi Jung was an organization man. In addition to his position at the well-heeled Jewish Center on New York’s Upper West Side, he maintained a large profile within the Orthodox Union and was one of the founders of the Rabbinical Council of America. These institutions expanded after World War II, just like other organizations. The tragic need to respond to the Holocaust had mobilized the American Jewish establishment—from the Joint Distribution Committee to Federations, from Hadassah to synagogue groups—and increased the resources and scope of Jewish organizational life.

The shared sense among organizational heads was that American Jewry would have to play a larger role to rebuild Jewish life in the Holy Land and the Diaspora. Yet, the unnoticed Ben Yephuneh initiative underscored Rabbi Jung’s and others’ conviction in the individual laymen (no women entered the society’s ranks) who could sometimes do much more behind-the-scenes than policy-waving institutions.

The group’s labors betokened Orthodox Judaism’s rising interest in taking part in the wider American Jewish scene. Very much aware of charges that Orthodox Jews exercised a posture of insularism—worst, still, “clannishness”—Rabbi Jung’s group believed it important that Orthodox Judaism increase its representation within, for example, the United Jewish Appeal and Federation of Jewish Philanthropies of New York (then, two separate organizations). In the postwar era, these institutions stood out for their interests in supporting global Jewry—in Israel and Europe, in particular.

Rabbi Jung’s circle worried that other American Jews viewed the Orthodox as out-of-touch. Besides Rabbi Jung and a few other rabbinic standouts, the Orthodox rabbinate struggled to show its ability to shine as brightly as its counterparts within the Conservative and Reform enclaves. In the first half of the twentieth century, figures like Rabbis Solomon Goldman, Mordecai Kaplan, Abba Hillel Silver, Milton Steinberg and Stephen Wise loomed much larger, in perception anyway, than the leading lights of the Orthodox community. Each was also closely tied to major Jewish institutions—such as the American Jewish Committee, American Jewish Congress, World Zionist Organization—and this left little room for Orthodox rabbis. The solution was to leverage influential laypeople who could have an easier time gaining access to these institutions than “more noticeable” rabbinic leaders.

Rabbi Jung proposed to name the group “Sinai.” Herman Wouk suggested “Kalev,” in recognition of the Biblical Caleb who stood out as the righteous resister among the wilderness-wandering Israelite people. Though they liked Wouk’s idea, the other members—Joshua Finkel, Moses Jung (Rabbi Jung’s brother), Bernard Levmore and Mortimer (Mordecai) Propp—feared that the name sounded too much like the Hebrew word for dog. They therefore settled on “Ben Yephuneh” since Caleb was the son of Yephuneh.

Each member possessed a considerable reach. Some were friendly with the staffs of major Jewish organizations like Federations, the Jewish Welfare Board and Israel-support agencies. Several held close connections to sympathetic leaders: non-Orthodox rabbinical figures like Robert Gordis and Louis Newman; politicians such as US Treasury Secretary Henry Morgenthau; and relatively recent Eastern European arrivals like Rabbi Yosef Yitzchak Schneersohn, the sixth Lubavitcher rebbe. These links were crucial for the pragmatic-minded Ben Yephuneh.

Mysteriousness is a virtue among hidden societies. Rabbi Jung’s notes and monthly meeting invitations identified members by initials and recorded other facts in pithy form. Nonetheless, the notetaker decided it worthy enough to express about a February 1947 meeting that “there was an eminently fine dinner, served by an equally fine hostess.” What’s more and owing to the cultural pedigree of the society’s membership, meeting minutes preserved the sentiment that another occasion was “rendered most pleasant and worthwhile by the hostess’ playing of Chopin and Beethoven on the piano.”

Most of Ben Yefuneh’s operations were quite serious. The group was animated by a grave concern for Orthodox Judaism in the immediate postwar period. Pundits predicted its demise, describing America’s Orthodox community as a “case study of institutional decay.” Rabbi Jung and his band of young lay leaders shared a “general deep concern  . . .  about the fact that Orthodoxy is diminishing in America.” They agreed that their community suffered from a miserable public relations problem that made it all-too-difficult to increase its role on the larger American Jewish arena. 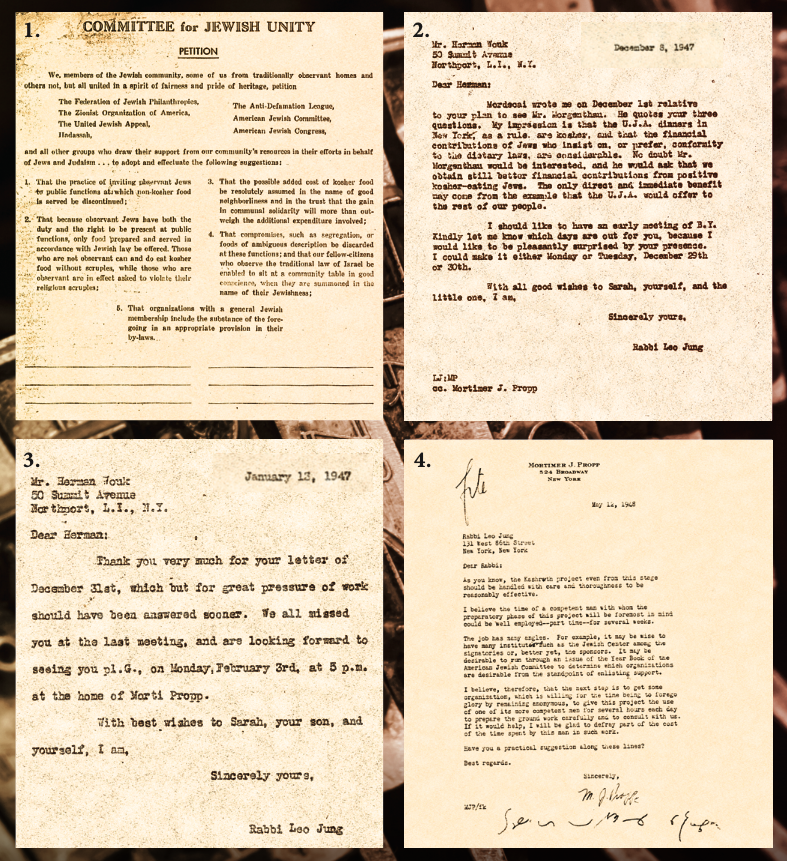 1. Members of the society furnished this petition to elevate kosher standards and pushed for Jewish leaders of all kinds to sign and participate. They also prevailed upon secular Jewish agencies to absorb the cost of providing kosher food at events because it represented “good neighborliness” and because “the gain in communal solidarity will more than outweigh the additional expenditure involved.” Among themselves, the group took credit for the menu changes at several subsequent well-publicized events. Images courtesy of Rabbi Dr. Zev Eleff
2.-3. Rabbi Leo Jung wrote several notes to Herman Wouk to encourage him to attend the society’s meetings. Wouk was balancing his work as a writer on a popular radio show and preparing a World War II novel. In time, The Caine Mutiny would win Wouk a Pulitzer Prize.
4. Mortimer (Mordecai) Propp was one of the most active members of the society, pushing for increased kosher standards, especially at non-Orthodox affairs.

Much of their work took a top-down approach, focusing considerable attention on the Orthodox rabbinate. Their interest made clear that Ben Yephuneh was not altogether uncritical of its own community. Its members expressed concern about the quality of training at several Orthodox schools and worried whether seminaries were “sending out the proper caliber of men” to compete against Conservative-educated leaders, especially along the expanding suburban frontier. One Ben Yephuneh member wondered aloud whether “Orthodox institutions would be helped if they would be brought under one central head, to make one big appeal for all Yeshivoth.”

To ameliorate, the society dispatched members to meet privately with yeshivah heads and other stakeholders to influence the situation, suggesting that mentors (like Rabbi Jung) be called on to support less-experienced rabbis in the field. Ben Yephuneh deployed similar efforts to “combat anti-Zionist and anti-American information given in Yeshivoth Kethanoth.” They shared a similar view held among American Mizrachi leaders that Religious Zionists needed to redouble their efforts to join with other Zionist groups in support of the soon-to-be-formed State of Israel. Moreover, aspiring Orthodox rabbis, to their mind, required further coaching on being a proper support of Israel.

Other initiatives exercised a bottom-up method. For instance, Ben Yephuneh sought ways to better include the Orthodox in the larger American Jewish scene. Several of Rabbi Jung’s men agitated to ensure that kosher food was available at Jewish functions. They surmised that a dearth of kosher eating impaired Orthodox participation in community programs and created undue unease for religiously observant participants who attended programs despite the dining situation. In the view of one unnamed Ben Yephuneh member, the discomfiture around dining impeded the Orthodox Jewish initiation into “American Jewish brotherhood.”

Clandestinely, in private correspondences, the Ben Yephuneh members charged that unkosher meals were tantamount to “segregation,” a very loaded word at that time. Ben Yephuneh called on Jewish agencies to absorb the cost of kosher service because it represented “good neighborliness and in the trust that the gain in communal solidarity will more than outweigh the additional expenditure involved.” Among themselves, the group took credit for menu changes at several subsequent well-publicized events.

Ben Yephuneh also engaged Jewish editors to publish Orthodox-friendly materials. The group commissioned newspaper and journal articles and used its contacts within the Jewish press to disseminate these tradition-sympathizing materials. One less-than-successful literary endeavor is perhaps, counterintuitively, most noteworthy. For several months, Rabbi Jung and his lay colleagues encouraged Herman Wouk to submit an essay to the popular Commentary magazine. He furnished a draft, but the magazine editors rejected the manuscript because it allegedly contained a “negative attitude” about the non-Orthodox.

The Ben Yephuneh meeting minutes recorded that, according to the group, “while [the essay] shows the indefensibility of any but the Orthodox position, it does not state the case for Orthodox Judaism.” Wouk explained that he had deliberately done this, “as he feels he could not do justice to such an article unless he studied three years at Yeshiva.” Other members encouraged the thirty-two-year-old literary phenom to give it more attention. Wouk demurred, however, citing his overly crowded schedule. In time, and with the rabbinic guidance of Rabbi Jung and Rabbi Moshe Tendler, Wouk returned to that unpublished work, developing it into his well-known This Is My God. 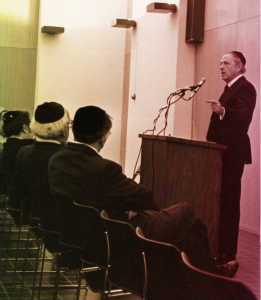 Wouk’s busy life betokened the major challenge for the Ben Yephuneh lay leaders. Wouk was at that time a writer for a popular radio show and had to miss several meetings because he was forced to remain in the office, in his words, “locked in a furious debate with some very stupid people.” Rabbi Jung wrote repeatedly to encourage Wouk to attend. Wouk apologized, requesting that Rabbi Jung “please greet my friends in BY I miss them.” He begged Rabbi Jung’s forbearance. “My book will be published, please God, early next month,” wrote Wouk. “I have some hope of being freed to a single line of work thereafter.” The book was delayed four more years. But when it did finally appear, Wouk’s Caine Mutiny rose to the top of the best-seller lists, earned the Pulitzer Prize and was remade into a film starring Humphrey Bogart. In the meantime, Wouk’s schedule rendered his Ben Yephuneh attendance rather spotty.

Ben Yephuneh disbanded after four or five years of intense activity. Understandably, its members prioritized professional and family responsibilities. Writing to Ezra Rosenfeld—who graciously shared all these sources—many decades later, in 1989, Wouk reflected that “in retrospect possibly there was something slightly comical and naïve about all this, but we meant well and had fun.”

Yet, Wouk also acknowledged that the experience moved him to raise the Orthodox flag when he relocated shortly thereafter to Long Island. Other Ben Yephuneh members remained active in cultivating American Orthodoxy. They were no longer part of a hidden society but continued to operate, sometimes too much under the radar, in support of Jewish life. Their efforts are an important reminder of the power of laypeople, beyond the purview of organizational life, to make a pivotal mark on Jewish history.

5 1 vote
Article Rating
This article was featured in the Summer 2020 issue of Jewish Action.