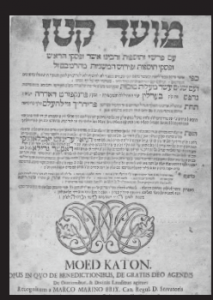 The 1735 edition of Moed Katan, printed in Frankfurt am Oder, that started the author on his journey of collecting antique sefarim.

It all began with one book.

A Gemara actually—a 1735 edition of Tractate Moed Katan, a gift from my beloved father-in-law, Dr. Eric Offenbacher. Ultimately, this Gemara led to my developing a passion for collecting antique sefarim, a hobby I have been very involved in for the past decade.

What is it about old sefarim that fascinates me? The books themselves speak. They tell the story of Hebrew printing. They tell the stories of their long-deceased owners. Take, for example, the Gemara that got me started on my journey. It was printed in a city whose Jewish community dates back to the thirteenth century—Frankfurt am Oder (not to be confused with the more well-known city of Frankfurt am Main), sixty miles east of Berlin and situated on the Oder River. Three separate editions of the Talmud were printed there between 1697 and 1739. When the edition I own was printed,1 the printing house was owned by Professor Johann David Grillo, a non-Jew, as noted in the Gemara’s title page. (In those days, it was common for gemaras to be printed in printing houses owned by non-Jews.)

The Gemara had originally belonged to my wife’s great-great-grandfather, the well-known antiquarian dealer and Jewish philanthropist Selig Goldschmidt (1828-1896). A resident of Frankfurt am Main, Mr. Goldschmidt was a supporter of Rabbi Samson Raphael Hirsch.2 A lifelong philanthropist, he shied away from honor, and only asked that he merit to be buried next to his rav. A visitor to the Jewish cemetery in Frankfurt today will notice four tombstones set apart from the rest—those of Rav Hirsch and his wife, and those of Selig Goldschmidt and his wife.

Another one of my treasures is a machzor for the Shalosh Regalim printed in Halberstadt, Germany, in 1860 and owned by Reuben (Robert) Goldstein. The machzor, one of only fourteen Hebrew books ever printed in Halberstadt,3 features the following inscription: “Reuben Goldstein, Juneau, Alaska, February 4, 1900.” Apparently, Reuben Goldstein, his wife, Anna, and their eight children were the first permanent Jewish settlers in Alaska. They arrived in Juneau in the early 1880s, a few scant years after the town was established. Prior to settling in Alaska, Goldstein had operated businesses in Montreal, Winnipeg, Seattle and other cities.

He started out in Juneau in the fur trade business but then discovered that no mineral claim had ever been filed for the twenty-nine acres of land lying underneath the commercial business district of Juneau. The Alaska State Library records that:

In 1886, [Reuben Goldstein] filed a mineral claim on the town site of Juneau.4 The public discovered this fact in 1888 when the Secretary of the Interior awarded a little over 29 acres of Juneau to Anna. The citizens became so enraged over the prospect of losing their homes and property they called a public hearing and decided to either hang Goldstein or throw him in the bay [newspaper clipping from San Francisco Call, Nov. 28, 1888]. The case was taken to the General Land Office (Goldstein vs. the Town Site of Juneau) where it was decided in favor of the town. From there it went to the Supreme Court and then referred to the Interior Department. The claim was determined valid. The land was thought to be worth between $900,000 and $1,000,000 and apparently Goldstein settled for a sum of money instead of the land. 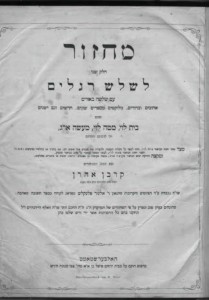 A machzor for the Shalosh Regalim owned by Reuben (Robert) Goldstein, who, along with his wife, Anna, and their eight children were the first permanent Jewish settlers in Alaska. They arrived in Juneau in the early 1880s, a few scant years after the town was established.

Goldstein passed away in 1900.5 Since there was no Jewish cemetery in the area, his body was sent 1,000 miles by boat to Seattle, Washington, where he was buried in the cemetery of Chevra Bikur Cholim. The fact that the family, went to such lengths to bury him in a Jewish cemetery says much about their connection to the Jewish community, despite their living in the Jewishly isolated city of Juneau. Interestingly, despite the judgment against the town, the townspeople seem to have held no grudge against the family as one of the children, Issie Goldstein, served as mayor of Juneau for three terms. Can’t you picture Reuben Goldstein davening from this machzor in the Alaskan town of Juneau around the turn of the twentieth century?

Traveling to the other end of the Pacific Ocean, we meet the Lubliner Rebbe of Bnei Brak, Rabbi Avraham Eiger (1914-2002), whose signature appears in a Masechet Nedarim I own that was printed in Shanghai in 1943. Many tractates of the Talmud, along with other scholarly books, were printed in Shanghai for students of the Mir and Slobodka yeshivot who sought refuge there during the Holocaust.6

The edition I own bears the inscription “shayach l’habachur Avraham Eiger” (this book belongs to the young man Avraham Eiger). Rabbi Avraham Eiger, who was born in Warsaw in 1914, was a direct descendant of the famed Talmudist and legal authority Rabbi Akiva Eiger of Posen. Rabbi Avraham Eiger studied with his cousin, the Admor of Lublin, Rav Azriel Meir Eiger, who in 1939 encouraged him to leave Poland. He joined a group led by the Amshinover Rebbe that eventually made it to Lithuania. There he was one of the few thousand fortunate Jews who received transit visas issued by the heroic Japanese vice consul in Lithuania, Chiune Sugihara. Along with Yeshivas Mir, Rav Avraham spent much of the war in Shanghai, and most likely it was there that he acquired the Gemara under discussion. After the war, he married, and along with his wife, made aliyah. He settled in Bnei Brak in 1955.7 This edition of the Gemara, printed while the Holocaust was raging in Europe and learned by refugees whose lives were shattered by war and deprivation, attests to the spiritual resilience of the Jewish people. Even though their lives were in upheaval, the refugees knew that gemaras had to be printed, that Torah study had to persist.

Another cherished sefer in my collection is the Jerusalem Talmud, Tractate Nedarim, printed in Warsaw in 1837.

1. FOCUS, FOCUS, FOCUS. Try to narrow down the area you would like to pursue. For example, some people like old Haggadahs; others prefer first editions of Chassidic books or early printed gemaras, and still others antique siddurim.

2. USE A BIBLIOGRAPHY SITE such as hebrewbooks.org, which has thousands of books. You can actually see what the old sefarim look like, including ones that go back to the 1500s. Similar to other researchers, many collectors rely on Google—both in Hebrew and English—to get started in researching subjects. Bibliography listings of major Jewish libraries such as the Israel National Library can be especially helpful.

3. SHOP ONLINE! Believe it or not, eBay has a multitude of offerings of old sefarim. I check the listings there frequently. Nowadays, acquiring old books is much easier than before in that many books are available online.

4. MAKE IT PERSONAL. Check the libraries of friends and family. You would be surprised at what you find.

5. GOING ONCE, TWICE… It is now much easier to access auctions of old sefarim. Collectors often participate in online auctions conducted by large Jewish auction houses in New York and in Israel. Some popular sites and auction houses are JudaicaUsed.com, virtualjudaica.com, Kestenbaum & Company, Asufa and Kedem auction houses.

6. SPREAD THE WORD. When people know you collect old sefarim, they let you know when they come across something. 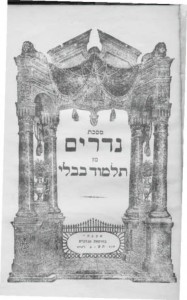 The stamp on the title page indicates that it belonged to Rabbi Raphael Shapira (1837-1921), rosh yeshivah of Yeshivas Volozhin from 1899-1915, “Ha’oveid avodas haTorah b’Volozhin” (who is engaged in the service of the Torah in Volozhin). Rabbi Shapira was the son-in-law of Rav Naftali Tzvi Yehuda Berlin (the Netziv). He married the Netziv’s daughter, Sara Rasha, when he was fifteen. Their daughter Lipsha eventually married Rabbi Chaim Soloveitchik, making Rabbi Shapira the son-in-law and father-in-law of two of the most preeminent scholars of Lithuanian Jewry.

I bought this particular sefer because of the special relationship my family had with Rabbi Shapira. My maternal grandfather, Rabbi Avraham Rosen, arrived in New York on March 18, 1922, leaving my grandmother and three small children behind in Poland. When he got to Ellis Island, he was detained for a few weeks because he had to appeal to the US government for permission to enter.8 The government allowed clergy into the country even without citizenship papers, but officials needed to verify that his rabbinic ordination was valid. The officials had never come across Rabbi Raphael Shapira, the name of the rabbi who conferred semichah to my grandfather. Finally, they consulted with one of the prestigious rabbis in New York at the time and asked about the legitimacy of rabbinic ordination from Rabbi Shapira. The rabbi answered, “That’s who I got my semichah from.” My grandfather and his family were spared from the Holocaust because of Rabbi Shapira. It’s not surprising that I feel a very special connection to this sefer. 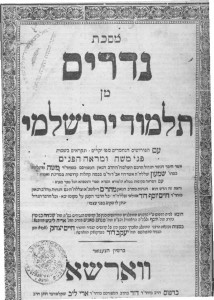 Jerusalem Talmud, Tractate Nedarim, printed in Warsaw in 1837. The stamp on the title page indicates that it had once belonged to Rabbi Raphael Shapira, rosh yeshivah of the Volozhin Yeshiva from 1899 to 1915.

Investigating sefarim and their owners is a pastime that takes me around the world and through the centuries in a virtual sense. I have “met” fascinating individuals whose sefarim now grace my library shelves—from simple Jewish laborers to prominent rabbis, from Jewish communities ranging from Warsaw to Shanghai. Each and every one of the sefarim I own has a story or stories behind it. Each and every one is a piece of Jewish history, a tangible link to our rich and illustrious past.

Listen to Eli Genauer speak about sefarim collecting at www.ou.org/life/history/savitsky_genauer/.

Eli Genauer is a businessman, community volunteer and book collector living in Seattle, Washington, where his family has lived for over 100 years. He has written extensively about his collection both online and in scholarly journals, and delivered a talk on his research at the 16th World Congress of Jewish Studies.

1. Rabbi Raphael N. N. Rabinowitz in his classic book on the early printed editions of the Talmud, Maamar al Hadpasat HaTalmud (History of the Printing of the Talmud), ed. A.M. Habermann (Jerusalem, 2006), 117, decries this particular edition because it lifted many innovations from the 1720 Frankfurt am Main edition, ascribing these additions to their own scholarship.

2. Information from both family tradition and from a book about Selig Goldschmidt written by his son, Meier Selig Goldschmidt. It was translated into English and distributed to members of the family.

5. Reuben Goldstein also holds the distinction of having a valley in Juneau named for him: Goldstein Gulch.

7. An obituary for him on the web site Dei’ah VeDibur in 2002 notes that in Shanghai “Rabbi Avraham Eiger was widely recognized as a ben aliyah. It was known that he would check all of his food for bugs by sunlight.”

8. I assume my grandfather was referring to some kind of visa allowing him to emigrate to the US.