Sitting next to his sixteen-year-old daughter, Shayna, in his flood-damaged house in Houston’s Willow Meadows neighborhood, Rick Guttman recalls a deal he made with God after his home flooded during Tropical Storm Allison in 2001.

“At the time, after that flood, I decided that we would not spend any more money or do anything [to flood-proof my home] because I made my own little arrangement with God,” he says. “I would volunteer and contribute to the community if we didn’t have another flood until Shayna, who was a baby at the time, graduated high school.”

Though he says he kept up his end of the bargain in terms of volunteering, the flooding timetable Rick envisioned was off by a year–Shayna will be a high school senior this coming fall.

“I think that I owe Him a little bit more time in synagogue,” Rick says.

The Guttmans are among an estimated eighty families belonging to the United Orthodox Synagogues of Houston (UOS) congregation who were affected by a devastating flood this past May in America’s fourth-largest city.

Rabbi Barry Gelman, rav of UOS, an OU shul, says his home took in thirty inches of water. “The water damage forces the homeowner to tear out the bottom four feet of sheetrock from the entire house as well as all the insulation,” he explains. “Adding to that, [the flood water was] ‘category three water,’ the most contaminated water; water that includes fecal matter.”

Virtually every area of UOS, which has about 325 member units (families or individuals), was flooded, amounting to more than $1 million in damages. “Our sanctuary is a shell,” says Rabbi Gelman. UOS is currently holding minyanim in the one room in the building that was not flooded.

A smaller Orthodox synagogue nearby, Meyerland Minyan, an OU shul in Houston’s Meyerland neighborhood, suffered about $75,000 worth of damage to its facility and lost $10,000 worth of sefarim. Rabbi Gidon Moskovitz, rav of Meyerland Minyan, says the water destroyed everything in its path, including the shul floor, walls, furniture and rugs as well as Chumashim, siddurim, machzorim and other sefarim. “But, there’s concrete and there’s air conditioning–which is all that really matters in Houston,” quips Rabbi Moskovitz. Among the sixty-five member units at Meyerland Minyan, upwards of ten families were affected by the flood, says Rabbi Moskovitz.

Shining Aftermath of the Flood

Jews both far and near rushed forward to help rebuild the community’s devastated homes, lives and shaken sense of hope. The OU was among the first to respond.

The day after the deluge, Rabbi Steven Weil, the OU’s senior managing director, visited the hard-hit frum neighborhoods. He witnessed the widespread loss of homes, appliances, cars, personal valuables and sefarim. He also saw a community looking after each other.

“I was blown away,” he says. “Neighbors were taking in families until their homes would be restored. Students from the [Robert M. Beren] Academy [a Modern Orthodox day school in Houston] were going from house to house helping people clear out [the wreckage]. It was very powerful.” He shared his experiences with Rabbi Judah Isaacs, director of the OU’s Department of Community Engagement, who immediately set up an OU Disaster Relief Fund campaign online.

Rabbi Isaacs reports that the campaign has prompted a generous response. “We give the funds to the local rabbis who have direct knowledge of individuals’ needs.”

Since the OU raised funds for victims in the aftermath of Hurricane Sandy as well as Hurricane Katrina, Rabbi Isaacs is familiar with the kind of havoc water can wreak on people’s lives. “You have to make sure there’s no mold, which entails ripping out a few feet of every wall and all the furniture has to be replaced. And it takes time for insurance coverage to take effect when you have hundreds of thousands of people claiming it at the same time.”

Rabbi Gelman says he has drawn inspiration from the tremendous outpouring of support, both financial and otherwise. Relief efforts at UOS, which are being organized by volunteer coordinators, have included clean-up help for flooded homes, arrangements for short-term housing, laundry and meals for individual families, larger communal meals and information sessions. Yeshivah students from Teaneck, New Jersey, and Yeshiva University, whose trips the OU helped underwrite, as well as a contingent from Columbus, Ohio’s NCSY region, traveled to the area to assist in the clean-up efforts. 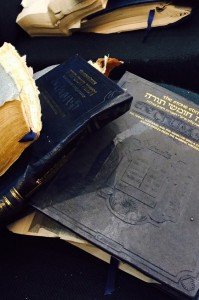 Rebuilding One Day at a Time

By late June, Meyerland Minyan was almost done with repairs. A tile floor, which the congregation hopes will be flood-proof, was installed. But rebuilding UOS will take six to eight months, says synagogue president Max Reichenthal.

Houston’s Jewish community is looking at about an eighteen-month timetable for total recovery, with an estimated $3.5 million price tag on the necessary support for individual flood victims and Jewish institutions, says Lee Wunsch, CEO of the Jewish Federation of Greater Houston. Among the 500 Jewish families in Houston whose homes were flooded, 250 need some kind of outside support, he says.

A full recovery, according to Wunsch, “means that families that today may be living on the second floor of their house, or may not be living in their house, are back to their ‘normal’ lives—their house has been restored, their kids resume their normal activities . . . and they’re coping financially.” Among the Jewish Federation’s top priorities, he says, are raising money for flood victims and working with the various government entities that are involved in the relief process.

Though the flood is taking a toll on the entire Houston Jewish community, it poses an additional challenge to the frum population due to their need to live within walking distance of a synagogue.

“Honestly, the biggest concern is, what’s going to happen with these neighborhoods, and are they going to maintain their Jewish character?” Wunsch says. “Because the cost of rebuilding, both institutions and homes, is so significant, there could be those who say either ‘I don’t have the money to spend to rebuild,’ or ‘I’m not going to spend that kind of money with the risk that my house or my institution, my synagogue, is going to be flooded again.’ And therefore—thinking as somebody in the Orthodox world—‘I have to leave the city.’ The options are very limited.”

For the Guttmans, the options include rebuilding their home to its pre-flood state, raising it above the floodplain, or tearing it down and starting anew. The decision, Rick says, depends on the result of the family’s flood insurance settlement and what kind of Federal Emergency Management Agency (FEMA) assistance is provided.

Until the prognosis is clearer, the Guttmans are living in the home of Rick’s mother-in-law in the Fondren neighborhood, whose Orthodox community was not severely affected by the flood.

Like the Guttmans, UOS members David and Dina Silberman are deciding how to proceed with their flooded home. Dina says they have “more questions than answers” on what to do next.

For their short-term solution, the Silbermans moved into an apartment owned by Dina’s aunt, who recently moved to Florida. The apartment is not within walking distance of UOS or another Orthodox synagogue, meaning the Silbermans need to make arrangements to be near UOS each Shabbat. In the long run, whatever decision is made regarding their flooded home, Dina says she “would not move out of this community.”

Reichenthal, a lifelong Houstonian who celebrated his aufruf at UOS shortly after a different flood in 1983, is hopeful for the UOS community’s future.

“Our membership is resilient,” he says. “I think that everybody will figure out where they’re going to be, what they’re going to do with their homes, shortly. . . I think people have to really sit back and deal with the shock first.”

Rabbi Gelman needed to vacate his house and made plans to move into an apartment in August.

“I’ve had to sort of split myself in half and deal with the communal issues as well as our personal issues,” Rabbi Gelman says. “The fact that I’m experiencing the same hardships that other people [in the shul] are experiencing gives me a better understanding of what people are going through, and the chance to address it from a more authentic perspective.”

“This creates real stress on families,” says Rabbi Gelman. “The children have seen their homes destroyed before their eyes, and now they’re displaced. It’s very traumatic.” Rabbi Moskovitz concurs. “One of the parents told me that her two-year-old keeps asking to go home. Unfortunately, there’s no home to go back to.”

“I don’t think that the majority of people will be financially impacted in a negative way,” says Guttman. “I think that many people are experiencing emotional distress,” he says. “The decision process, the anxiety and the uncertainty [with] their home, their insurance proceeds . . . It has taken adults out of their natural comfort zone.”

Dina Silberman says her biggest fear is “that this place that is so emotionally strong can be destroyed because of the economics of rebuilding this community.”

Yet Rabbi Gelman conveys a sense of optimism about the synagogue’s future. “I have a lot of confidence in the long-term health of the community,” he says. “This is not at all to diminish the real misery that people are experiencing now, and I’m not one who says, ‘Ignore your current situation because everything will be okay . . .’

“I’m sure we’ll come out of this stronger, with a balanced perspective, knowing what’s important in life,” says Rabbi Gelman. “Ultimately, our community is not our buildings and material possessions—it’s our people.”

Jacob Kamaras, a journalist living in Houston and a member of United Orthodox Synagogues, is the editor in chief of the Jewish News Service (JNS.org), a wire service providing content to Jewish community newspapers and web sites across the US and abroad.