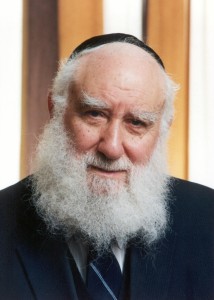 In recognition of Rabbi Cooperman’s extraordinary contributions to Jewish women’s education, we are highlighting this article from the Spring 2014 issue of Jewish Action that detailed his life and achievements.

In what was undoubtedly one of the biggest revolutions in women’s Torah study since Sarah Schenirer founded the first Bais Yaakov in Poland in 1917, Rabbi Dr. Yehuda Cooperman launched a new concept in women’s Torah learning in 1964. His vision: to establish an institute of in-depth Torah studies for women that would be founded on the principles of Torah MiShamayim and emunat chachamim; at the same time, it would be recognized as an institution of higher education that grants academic degrees.

“What inspired me to start Michlalah was my experience while teaching in a more modern religious teachers’ college,” says Rabbi Cooperman. “A student in the class said to me, ‘Moreh, you have to know that we were educated to know that we may differ with Chazal.’” That day I resigned. I had thought about [resigning] before that, but I was enjoying [my career]; I was the principal of Boys Town, where I didn’t have to deal with administrative [duties] . . . I was studying in the Hebron Yeshiva kollel in the morning and had chavrutot in the evening. But I felt that something had to be done for women’s education.”

Michlalah Jerusalem College for Women opened its doors with twenty-three students. “[In those days] a young woman who had a high school diploma could attend a teachers’ seminary, but to attend a university, one needed a bagrut [matriculation] certificate. [Many of] the women who came to study [at Michlalah] chose to do so even though they had matriculation certificates,” says Rabbi Cooperman, “some at a very high level. We were the youngest teachers’ seminary in the country and the first one to achieve full academic accreditation.” Michlalah was granted accreditation by the Council of Higher Education of the State of Israel in 1978.

Rabbi Cooperman was born in Dublin to parents who imbued him with a love for chesed, Torah and Eretz Yisrael. He earned degrees in law and Semitic languages from Dublin University. While there he was also involved in the activities of religious youth movements. He continued to study under Rabbi Eliyahu Dessler at the Gateshead Yeshiva, and later under Rabbi Yechezkel Sarna at the Hebron Yeshiva. He earned semichah from Rabbi Sarna and from Rabbi Herzog, the then-chief rabbi of the State of Israel. In 1952, he married his wife, Tzippora, and he returned to Dublin University where he received a master’s degree in Semitic languages and became the first Jew to be awarded the prestigious gold medal for academic achievement, recommended by the same professors under whom he studied Bible criticism and with whom he vehemently disagreed.

Moving to the US, he earned a second master’s in education from the University of Chicago, and, in 1975, a doctorate from the Hebrew Theological College of Skokie for his supra-commentary to the Meshech Chochmah. The Coopermans made aliyah in 1956, and Michlalah became the life’s work of the late Rabbanit Cooperman as well.

Since its inception, Michlalah has graduated more than 15,000 students, many of whom are in positions of education, research and leadership throughout Israel and the world. Five thousand of those women are from abroad, and for a number of years there have also been specialized programs for men. Currently, there are more than 2,000 students in Michlalah’s various programs, which, in addition to limudei kodesh, include the humanities, sciences, arts, expressive therapies and leadership programs, to name a few.

Michlalah was a chiddush, offering Torah study at such a high level for women,” says Rabbi Cooperman.

When asked what he feels are his greatest achievements, he says, “First of all, that my children are all yodei Torah.” Regarding Michlalah, he says his greatest achievements are, “the building of Torah homes by the graduates and Torah mechanchot [educators], and academic recognition by the government for teaching and learning Tanach [despite the fact that the college does not teach Bible criticism]. This is a kiddush Hashem, though, at the end of the third year, I give two lectures on Bible criticism so [my students] will know what it’s about.”

Michlalah is still the eclectic and nonpolitical institute that I remember attending as a student, when we heard lectures from rabbanim across the religious spectrum. “You see every possible hair covering for women [in the classes] and the same [diversity] applies to the men. I recently looked around in the middle of Minchah and noticed there was every possible kind of kippah represented,” Rabbi Cooperman says.

“Baruch Hashem there are wonderful results, and I thank Hakadosh Baruch Hu that I was privileged to be the one to implement this vision,” he says.

Rabbi Cooperman, in his eighties, still teaches four courses at Michlalah and has published many important works, including his commentary on the Meshech Chochmah and one on Seforno. The rav who began it all sees himself primarily as a “moreh b’Yisrael”—a teacher in Israel.

Toby Klein Greenwald is an educator, a journalist and an award-winning director of the Raise Your Spirits Theatre. She lives in Efrat with her family.