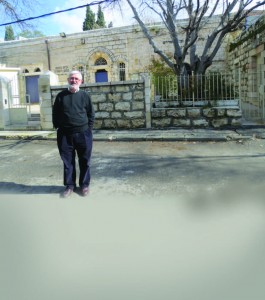 If, like me, you are a man of a certain age who never served in Vietnam or the Israeli army, you have probably also never seen a gun fired in anger.

This was certainly the case for the ten or so of us—all greying American and British olim—who came together on a recent evening to be trained as shomrim, guards, for our shul.

It’s a little surreal here in Jerusalem. Despite all the dire predictions of another intifada, life continues pretty much as normal for those of us who, baruch Hashem, remain physically untouched by any pigu’ah, terrorist attack, or local “nationalistic” violence. That is not to say, of course, that we remain emotionally unaffected. The attack this past November in the shul in Har Nof and other incidents have made us all too conscious of the uncertainty of life and safety in our city. We move about with a heightened awareness of our surroundings.

After the Har Nof attack, the va’ad of our small shul in the Baka neighborhood decided that all those willing to do so—olim as well as native Israelis—should form a rotation to patrol outside the shul at least during Kabbalat Shabbat and the Shabbat morning davening. The unenviable role of setting up the rote, with all its many variables, was taken on by a recent oleh from Teaneck, New Jersey, Kal Feinberg.

Our ninety-minute training session was led by shul member Yonatan (last name not for publication), who has an extensive background in security matters. Yonatan first went through the basics:

Then we were introduced to our equipment: a whistle to sound the alarm, a very real-looking plastic gun that actually fires a tear gas capsule, and a reflective vest. We learned how to position the gun holster on our belts or sticking out from a coat pocket, and how to draw the gun. “Don’t try to be cowboys,” we were told, “and don’t try any fancy tricks you may have seen on TV.” Simply grab the gun out of the holster very firmly, flip off the safety catch with your thumb and point it directly at the attacker’s face when firing.

Backed by a pesak from the rav of the shul, we were instructed to bring our own cell phones to shul when on duty. “Dial 100 for the police just before Shabbat,” we were told, “and hang up immediately. That way, should you need it, you can reach the police by pressing just one button.”

Yonatan emphasized that the primary objective of the guard on duty is to prevent an attacker from reaching the doors of the shul itself. The fact that the guard might be injured or even killed in attempting to fulfill this responsibility was unspoken but self-evident. But the underlying purpose of our shemirah, it became clear, is to serve as a deterrent. Seeing an alert and armed person on duty outside the shul might just persuade a terrorist to try to find an easier target elsewhere (not that such an outcome would fill me with any satisfaction).

And so, on the next Shabbat morning, just before we reached Shema, I removed my tallit, put on my coat and went outside the shul to take my turn as the protector of my fellow congregants. My predecessor handed over the whistle and the tear gas gun and I took my stance, trying to look as formidable as a seventy-year-old weakling could.

Left on my own, I certainly felt anxious about the possibility of having to confront someone or, even worse, to put into practice any of the steps I had learned to fend off an attacker. But I must admit that I was equally apprehensive about making a mistake and sounding the alarm about someone who was perfectly innocent, making an idiot of myself in the process. Thankfully the half hour passed peacefully, with only a few “Shabbat shalom” greetings exchanged between me and some latecomers.

For those of us who have never previously been threatened face-to-face by an enemy (not counting the missiles they tried to kill us with during last summer’s Operation Protective Edge), it takes some adjustment to summon the necessary courage to defend ourselves. But that’s just the way it is here; the bottom line is literally “kol Yisrael areivim zeh la’zeh,” that each of us must take responsibility for the safety of all the others, bringing into stark actuality words that were previously only a nice maxim.

David Olivestone, a member of Jewish Action’s editorial committee, has lived in Jerusalem with his wife, Ceil, since 2013.