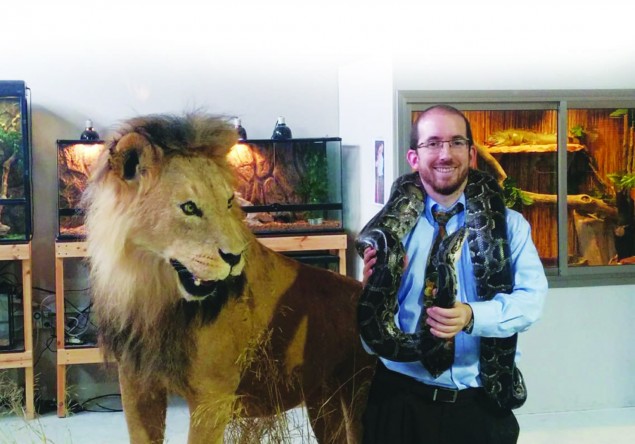 Who doesn’t love animals? Which child doesn’t look forward to visiting the zoo? A new museum in Beit Shemesh brings visitors up close to many of the animals mentioned in Tanach and the Talmud. Many of the taxidermy exhibits at the Biblical Museum of Natural History are not behind glass. They are in the open, viewable from all angles and even touchable under supervision. In fact, it is the tactile experience that makes this museum unique and especially memorable.

Founded by Rabbi Natan Slifkin, the British-born “Zoo Rabbi,” the Beit Shemesh-based museum, which opened this past Sukkot, features live and inanimate exhibits, including taxidermy mounts and other fascinating biological artifacts. Described on the museum web site (www.Biblicalnaturalhistory.org) as “part natural history museum, part zoo,” the museum aims to “enhance appreciation and understanding of Scripture, Talmud and Jewish tradition via the natural world, and to thereby also enhance appreciation and understanding of the natural world itself.” As such, it offers many wonderful attractions including taxidermy mounts of a lion, cheetah, hyena, wolf, caracal and mongoose and a collection of exotic shofars, including (an item the museum describes as) the horn of the legendary unicorn.

The dynamic and erudite Rabbi Slifkin, who turned his childhood love of animals and nature into a career, serves as a museum guide. On the day I visited the museum, I followed the rabbi as he led a group of Israeli high school students, mesmerizing them in Hebrew with his stories and insights. The tour began with a short talk about Biblical natural history and a ten-minute video on the lion in the Torah, featuring Rabbi Slifkin himself and a lion in Africa. Rabbi Slifkin then delivered a riveting analysis of how lions stalk and attack their prey and related that to concepts in the Torah. He quoted Pirkei Avot (5:20): “Yehudah Ben Teima says: ‘Be strong like the leopard, light like the eagle, quick like the gazelle and mighty like the lion to perform the will of your Father in Heaven.”’ He then posited that the lion’s real might and strength is its ability to exercise “restraint and self-control.” When Rabbi Slifkin concluded, a curtain opened revealing the main exhibit area with its many mammals, birds, fish and insects prominently on display. The first animal to catch my eye was a full-size tzvi, which is where Rabbi Slifkin began his tour. He explained that the tzvi of the Bible is a gazelle, although it is often mistakenly identified, primarily by Europeans and North Americans, as a deer. The animals of the Land of Israel, he continued, are generally different from those in the Diaspora. Although both deer and gazelle exist in Israel (ayal and tzvi, respectively), the gazelle was unknown in Europe, so the tzvi became associated with deer, with which Europeans were familiar. 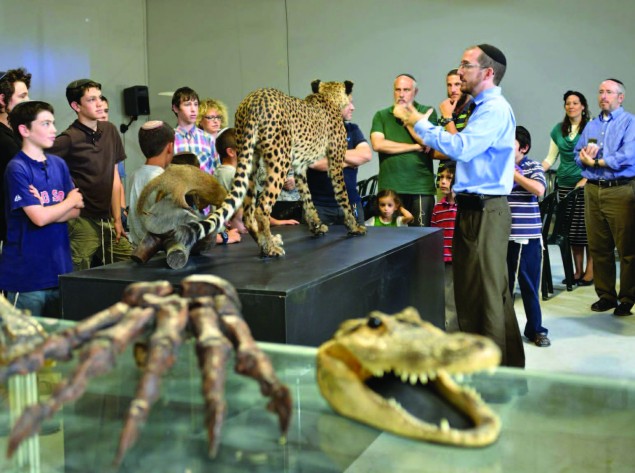 Rabbi Slifkin, who speaks English and Hebrew fluently, serves as a museum guide, weaving a compelling narrative of Torah verses and midrashim about the various specimens on display.

In a similar vein, he explained, many English versions of Tanach mistakenly identify the shualim in the story of Samson (Judges 15:4) as foxes. Pointing to a full-size jackal, he explained why the shual must be a jackal, not a fox.

Various displays of birds assist visitors in understanding which birds are kosher. For forty minutes, Rabbi Slifkin led the group around the exhibit area, weaving a compelling narrative of Torah verses and midrashim about the various specimens on display. A favorite moment for many of the visitors was the opportunity to wrap a live python around their necks. This is just one of numerous live exotic animals on display in the museum. Other live animals include hyraxes, a chameleon, a boa constrictor, a hedgehog and more.

Despite the fact that the museum, currently housed in a renovated warehouse in the industrial district of Beit Shemesh, is obviously not finished, and its location and outward appearance might be a deterrent to some, it has much to offer visitors of all ages.

The museum is indoors and air conditioned. In nice weather you can sit in the museum’s small outdoor picnic area and visit the petting area. A visit to this museum is not only fun and enjoyable, it will give you and your family a whole new appreciation for both Torah and the natural world.

5 1 vote
Article Rating
This article was featured in the Spring 2015 issue of Jewish Action.