This article was originally published in the winter 2016 issue of Jewish Action.

Gush Etzion, between Jerusalem and Hevron, familiar to the Patriarchs and Matriarchs, was the birthplace of King David and served as the heart of ancient Judea in the time of the Second Temple. Today it is once again alive with people and activity. Instead of merely focusing on an interesting place to visit in this column, I decided to make an exception and focus on the people behind the place. 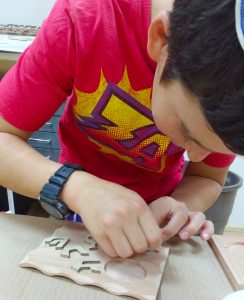 A young boy at The Workshop glues letters onto the base of his candle holder. Photos courtesy of Mandy Broder

This past summer, Mandy and Jeremy Broder, a British-Israeli couple who are skilled artists, turned their personal dream into reality by opening “The Workshop” (“The Sadna”) on the grounds of Kibbutz Rosh Tzurim in Gush Etzion. Remarkably, in only a few short months, the Broders’ attraction has proven to be wildly successful and is captivating visitors of all ages (from four to ninety and beyond!). Located less than an hour away from Jerusalem, this Judaica workshop enables children and adults to design their own beautifully crafted projects, such as a honey dish, Shabbat candle-holder, benchter holder or, with Chanukah approaching, a holiday-related work of art. In the process, one not only learns skills associated with woodworking, including using lathes, drills, sand paper and sanding machines, but one also gains an appreciation for the unique qualities of wood and the significance of wood in the region.

Three generations of my family recently participated in the hands-on woodworking workshop, and we were amazed at how engaged we were in the activity. From the moment we entered The Workshop until we completed our art project some two and half hours later, we were busy cutting, sanding, filing, gluing and varnishing, using highly specialized woodworking machinery throughout.

When we arrived, Mandy greeted us at the door and invited us to take seats around the large worktable. Jeremy then provided us with an informative introduction to woodworking. He explained the various types of wood and their particular properties (that particular day, we could choose to work with either cherry wood or pine).

Jeremy also provided us with background on the “Lone Tree” (“Etz Haboded”), which we passed along the road to Rosh Tzurim. More than 500 years old, the tree, an oak (alon), stands across from the entrance to nearby Alon Shvut (hence, the name of the yishuv). It stood at the center of the cluster of the four kibbutzim built in Gush Etzion in the 1930s and 40s, which were destroyed in the War of Independence in May 1948. Over the years, the tree became a symbol of the yearning to return to Gush Etzion and to rebuild—a dream that took nineteen years to fulfill. Today, the tree is the symbol of Gush Etzion—a flourishing cluster of communities just south of Jerusalem.

The origin of the term “Etzion” is also rooted in history. The first kibbutz established in the area in 1935 (and one of the four to be destroyed thirteen years later) was named Kfar Etzion in honor of Shmuel Holzman, one of the founders of the kibbutz. The word for wood or tree is “holz” in Yiddish; it’s “etz” in Hebrew. Etzion is a contraction of two words: “Etz” and “Zion.” 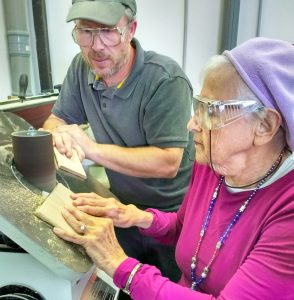 A ninety-year-old woman smooths a piece of wood on the oscillating spindle sander.

When the Broders are not running workshops, they are busy creating a wide variety of beautiful Judaica including challah boards, wall hangings, invitations and hand-crafted wood creations. For more information about The Workshop, visit its Facebook page at The Workshop Gush Etzion or visit its web site at mandybroderjudaicacreations.com. Sessions are two-and-a-half hours long and cost a reasonable 150 shekels per person, minimum of six participants. Call 972.54.678.5813 for information and reservations.

The Workshop joins the ranks of the many great family activities located in the Gush Etzion area. Other activities in the immediate area include Pat BaMelach, an artisan bread bakery located just a few hundred yards from The Workshop. The bakery offers hands-on, family-friendly workshops led by professional bakers on how to make fresh rolls, focaccias, sour-dough pretzels and more. For more information, visit www.patbamelach.com/#workshops.

And once you are in the area, stop for a visit to Deer Land. Set in a forest, Deer Land (Eretz Ha’ayalim), located about ten minutes from The Workshop and Pat BaMelach, features a variety of fun, sports-based activities including bungee trampolines, a climbing wall, horseback riding, and a zip line—the longest one in Israel. You can find everything it has to offer at etziontour.org.il/attraction/deer-land-park/.

Of course, any visit to the area must include a stop to see the new, redone audio-visual presentation in Kibbutz Kfar Etzion, which tells the dramatic story of the growth of the Gush Etzion kibbutzim in the 1940s, their tragic end on the very day that Israeli independence was declared and the rebirth and growth of the region after the area was liberated in the Six-Day War in 1967. A visit to Gush Etzion should be on your “must-do” list on your next trip to Israel.