Much of our contemporary Jewish practice is designed to transform history into personal memory. I once heard someone explain the difference between history and memory as follows: history begins with the word “his,” indicating that this is someone else’s story. Memory begins with “me,” connoting a personal recollection of one’s own story. A visit to Eretz Bereshit (Genesis Land) is not a tour; it is an encounter with the Jewish past that has the potential of transforming Biblical history into personal memory.

Eretz Bereshit provides the opportunity to not only learn about the period of Avraham and Sarah, but to experience it in the geographic region where the events of the Tanach took place. Visitors dress in period-appropriate garb and ride on the backs of camels against the breathtaking scenic backdrop that our ancestors were accustomed to: the rugged wilderness of Midbar Yehudah, the Judean Desert. Visiting Eretz Bereshit provides an opportunity to connect with our personal memory, not just to learn about Jewish and Biblical history.

Only twenty minutes from Jerusalem, Eretz Bereshit is located in the town of Alon, just off the road that descends from Jerusalem to the Dead Sea, Masada and Ein Gedi, near Ma’aleh Adumim. Upon leaving your vehicle, you will be met by Avraham’s trusted servant, Eliezer, and mount a camel for a short journey to Avraham’s tent. To truly feel transported back in time, each visitor is given a robe—a rectangular piece of cloth with an opening for one’s head and a cord to tie around one’s waist. 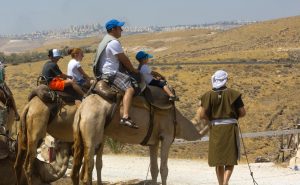 A staff member portraying Eliezer (far right) assists visitors in mounting their camels as they prepare to travel to Avraham’s tent.

Traveling on camelback through the hot sandy desert, across a landscape scarcely unchanged in 4,000 years, while listening to Eliezer’s narrative, it is easy to close your eyes and imagine yourself living in the time of the Patriarch himself, sitting in his tent, scouring the sandy hills in every direction for guests to partake of his hospitality. Your departure from the twenty-first century into the world of the Patriarchs and Matriarchs is now complete.

Genesis Land is the brainchild of Boaz Ido, a Jerusalem native who created the Biblical-style ranch in 1996. Attracted to the area’s rich Biblical history, he moved with his family to Alon.

When he first visited the area, Ido stood at a point that overlooked the Dead Sea and the Jordan Valley, and was immediately reminded of the story of Avraham and his nephew Lot’s parting. It was at that moment that the idea of Eretz Bereshit was born.

An ideal attraction for young and old alike, Eretz Bereshit offers a variety of experiences; the standard package includes a camel ride, Eliezer’s hospitality and pita baking as children and adults alike are given the opportunity to bake their own pitot over a fire, as it was done in ancient times. The experience is also a learning opportunity about the mitzvot involved in making bread, such as separating challah. Eliezer is frequently joined by other characters in the Biblical story—Yitzchak, Rivka or Yosef and his brothers—all of whom act out the Biblical scenes in a way that appeals to the particular audience.

In Eretz Bereshit, one gets the opportunity to touch the past in a very real and concrete way. The attraction offers a number of hands-on experiences designed to create personal memories and to enhance the visit for children. One of the most enjoyable and challenging ones is shepherding a small flock of goats and sheep from point to point. (Participants quickly learn that it is harder than it looks!) They also learn about the qualities of a good shepherd, traits that were regarded as essential in order to be an effective leader of the Jewish people. (Note that some of the Jewish people’s greatest leaders, such as Avraham, Moshe and King David, were shepherds.) Reflect too on the words of the Twenty-third Psalm, “The Lord is my Shepherd,” and the implications of that well-known phrase. 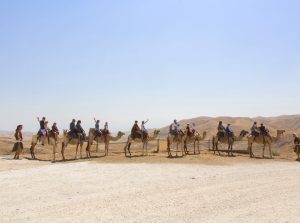 A caravan of camels walking through the rugged sandy hills of the Judean Desert on the way to Avraham’s tent.

Another popular activity at Eretz Bereshit is writing in ancient Hebrew script on parchment with ink and quill. Children get a chance to learn about the history of the letters of the Aleph Bet. For example, the letter Bet originally looked like a house (bayit) and the letter Ayin looked like an eye (ayin). Additional activities include creating a picture from colored mosaic stones and playing archeologist as participants attempt to reconstruct a piece of pottery from shards. Eretz Bereshit can also arrange for jeep rides across the endless desert landscape or to Ein Mabua, a nearby peaceful oasis with a cool refreshing spring. It also offers an opportunity for an overnight in the desert with one’s children (up to two adults and two kids) in the Eretz Bereshit Tzimmer. Keep in mind it is one large room with mattresses on the floor. Be sure to call Eretz Bereshit in advance to arrange for an English-language tour at 02.997.4477.