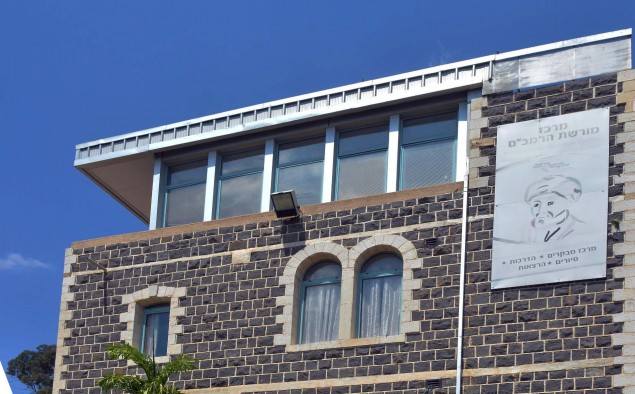 Exterior of the Maimonides Heritage Center in Tiberias. Photos by Sasson Tiram Photography, except where indicated otherwise.

In the summer of 2003, Rabbi Yamin Levy, senior rabbi at Congregation Beth Hadassah, Iranian Jewish Center in Great Neck, New York, and a small group of friends visited the kever of Maimonides, Moshe ben Maimon, in Tiberias. They were horrified by what they saw.

Located in an economically depressed area, the gravesite was terribly neglected; people would literally throw their garbage on the grounds surrounding the grave. There was no biographical information about Rambam, no explanation about his enormous Torah scholarship or contributions to Jewish life. The building adjacent to the kever was a hangout used by drug addicts and troubled teens. 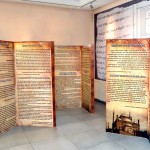 Excerpts from the Rambam’s many writings, arranged chronologically

Distressed, Rabbi Levy decided then and there to do something. Upon returning to the States, Rabbi Levy collaborated with a group of dedicated volunteers and donors, as well as MK Limor Livnat and Israeli Prime Minister Binyamin Netanyahu, to transform the area from a drug-infested slum into a beautiful tourist destination, enabling visitors to experience the spirituality of Israel’s second-holiest city and generating much-needed revenue for the neighborhood. Rabbi Levy and several donors succeeded in purchasing the dilapidated building adjacent to Rambam’s kever and began to turn the place into a center for study, education, tourism and inspiration, a place befitting Rambam’s stature and legacy.

Fast forward to 2009. The once-decrepit building is now the Maimonides Heritage Center, dedicated to teaching the history of the Rambam. The Center includes a museum, a kollel and a women’s midrashah, and it hosts annual conferences on the Rambam that attract more than 600 participants. Additionally, it serves to boost the local economy and to provide support for the community. “The Center is a major force in social services for the needy families of Tiberias,” says Rabbi Levy. “In no small measure, Rambam’s legacy is impacting the world in ways beyond the beit midrash.” 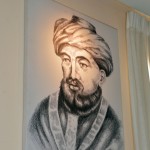 Portrait of the Rambam

Rambam: The Person
There is a famous saying about Rambam: “Between Moses (Moshe Rabbeinu) and Moses (the Rambam), no one arose like Moshe!” Maimonides was a Talmudist, halachist, physician, philosopher and communal leader—and he remains one of the most important figures in the history of Torah scholarship. The Maimonides Heritage Center makes the life of Rambam come alive in a dramatic and inspiring way. State-of-the-art multi-media, educational displays and colorful, eye-catching exhibits highlight the four stages in the life of Rambam: his birth and early life in Cordoba, Spain in 1138; his years in Fez, Morocco (1160-1165); his aliyah to Eretz Yisrael and brief sojourn there (1165-1168); and finally, his years in Fostat, Egypt (near Cairo, 1168-1204), where Rambam achieved fame as a great doctor and was the personal physician to the Sultan Saladin. One of the new interactive features of the Center that is both fun and educational is set in Cairo in 1172. Visitors to the museum are challenged to solve clues that are required to unlock a box that contains medication urgently required by the Sultan.

The museum also captures the essence of the great halachic works of this Torah giant of the twelfth and thirteenth centuries, in particular the Mishneh Torah, and his great philosophical work, Moreh Nevuchim, The Guide for the Perplexed. Various panels describe Maimonides’ greatness as a physician, his medical doctrine, his philosophy of living a good life and his Thirteen Principles of Faith. All of the exhibits are captioned in English and Hebrew. Visitors are invited to watch a short film about the life of Rambam. 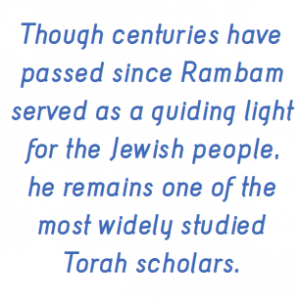 But what truly makes a visit to the Heritage Center come alive is the animated tour guide, Rabbi Michael Schachter, executive program director, who was instrumental making the museum a reality. Rabbi Schachter greets each group and provides a fascinating and lively tour that is perfectly suited to the ages and backgrounds of the particular group.

A Holy City
Tiberias is considered one of the four holy cities of Israel because of its strong association with the development of Torah She Be’al Peh. The city is represented in the Kabbalah as water (Jerusalem is fire, Hevron is earth and Safed is air), not only because it is located on the shores of the Kinneret (Sea of Galilee), but also because water symbolically represents Torah, and Tiberias was the final stop of the ten stops of the Sanhedrin’s exile. (See Rosh Hashanah 31a,b: “Correspondingly, the Sanhedrin wandered to ten places of banishment, as we know from tradition, namely, from the Chamber of Hewn Stone to Hanuth, and from Hanuth to Jerusalem, and from Jerusalem to Yavneh, and from Yavneh to Usha, and from Usha [back] to Yavneh, and from Yavneh [back] to Usha, and from Usha to Shefar’am, and from Shefar’am to Beit She’arim, and from Beit She’arim to Tzipori and from Tzipori to Tiberias.”) 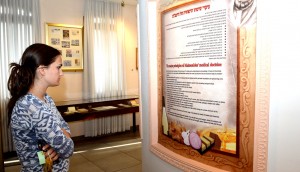 Learning about the Rambam’s life and legacy at the Maimonides Heritage Museum. Photo: Yoram Cohen

The Rambam’s gravesite is just one of the mekomot hakedoshim in Tiberias. Close to his kever are the graves of Rabbi Yochanan ben Zakkai, who is credited with moving the Sanhedrin from Jerusalem to Yavneh, and his two talmidim, Rabbi Yehoshua and Rabbi Eliezer, who carried Rabbi Yochanan ben Zakkai past the Roman lines in a coffin so the latter could confront the Roman general (and soon-to-be-emperor) Vespasian. Not far from the Rambam’s kever is the frequently visited grave of the Tanna Rabbi Meir Baal Haness and just up the hill is the grave of Rabbi Akiva. It is unclear why Rambam chose to be buried in Tiberias, but many speculate that it was precisely because of the city’s longstanding connection to the ongoing development of Torah.

Today, archaeologists are uncovering extensive sections of Tiberias from the period of the Sanhedrin and the Amora’im. One day in the not-too-distant future, these excavations will undoubtedly be open to the public for exploration. (See my article “On and Off the Beaten Track in . . . Hamat Tiberias” [fall 2013].)

Though centuries have passed since Rambam served as a guiding light for the Jewish people, he remains one of the most widely studied Torah scholars. Now, thanks to Rabbi Levy, we can gain an appreciation for Rambam at the Maimonides Heritage Center.