Mazal Tov! Methuselah is a father. At the age of ten (plus 2,000!), perhaps the oldest tree to be germinated from an ancient seed, Methuselah has been successfully pollinated with another date palm, which is producing offspring.

But I am running ahead of myself.

The rebirth of modern Israel underscores the Divine promise of the eternity of the Jewish people and the enduring connection we have to our ancient land (“Lecha eten et ha’aretz”). Medinat Yisrael, now home to the largest Jewish population in the world, eloquently testifies to the tenacity that enabled us to never forget God’s promises and to keep the dream of return alive for 2,000 years.

There are a number of places in Israel that highlight these Divine assurances. One such location is the menorah on the grounds of the Knesset in Jerusalem. (See my article in the summer 2012 issue, “The Menorah—Official Symbol of the State of Israel.”) The Romans chose to commemorate our destruction and exile in the first century on the famous Arch of Titus in Rome. It depicts the menorah of the Beit Hamikdash being triumphantly carried off by the Romans in 70 ce, after the Churban. The choice of the menorah as the symbol of modern Israel and the prominent display of a large menorah across from the Knesset is undoubtedly a statement that with the rebirth of modern Israel, the menorah and the Jewish people have returned home. We continue to yearn that our return be the first step towards the ultimate restoration of the menorah to its rightful place in the Beit Hamikdash.

Another extraordinary reminder of our ancient and eternal connection to Eretz Yisrael is the “Methuselah Tree,” located in the Arava Institute Research Park on Kibbutz Ketura in the Arava, about fifty kilometers north of Eilat.

The story of this remarkable tree begins in the period of the Great Revolt against Rome (66 to 73 ce). It was in the final year of that war, three years after the destruction of the Second Temple, when Masada, the final holdout of the Jewish rebels and several hundred refugees of Jerusalem, succumbed to the Roman legions. 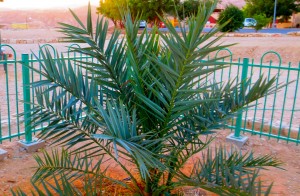 Methuselah—date palm grown from a 2,000-year-old seed. Courtesy of the Arava Institute for Environmental Studies

The isolated fortress remained destroyed and essentially unexplored until the 1960s, when Israeli archaeologist Professor Yigael Yadin led a major expedition to uncover and restore the remnants of the magnificent palaces, bathhouses, mosaics and frescos that had been built by King Herod over 2,000 years earlier. In the years following Professor Yadin’s expedition, Masada was extensively restored; today, thousands of people visit Masada, now a UNESCO World Heritage Site, annually.

Among the many dramatic finds the Yadin excavations uncovered was a small clay jar containing dried date pits. The pits had been buried in a corner of the remains of Herod’s palace for 1,891 years, abandoned by the last Jews on Masada in the spring of 73 ce! After it was discovered, the cache of pits was placed in a drawer in a lab in Tel Aviv University, where they remained for forty years. In 2005, botanical researcher Dr. Elaine Solowey, an expert in desert agriculture and the director of the Center for Sustainable Agriculture at the Arava Institute for Environmental Studies, decided to plant a few of the date pits and see what, if anything, would sprout. To her great surprise, after a few weeks, a small sapling emerged from one of the seeds, and has since grown into a young date palm. Now ten years later, the date palm, nicknamed Methuselah after the oldest person named in the Torah, is over ten feet tall, with offshoots and flowers.

Initially thought to be botanically impossible, this successful project has been featured in the New York Times, National Geographic and other publications, states the Arava Institute web site (arava.org/arava-research-centers/arava-center-for-sustainable agriculture/methuselah/). Although the date palm is one of the seven species that the Torah tells us are indigenous to the Land of Israel, and was often used to symbolize ancient Israel, thanks to the Romans it disappeared entirely from the landscape in the 4th and 5th centuries, remaining extinct for about 1,500 years. Today there are huge groves of date palms throughout Israel, many in the Beka (Jordan Valley), but this is only due to the importation of trees in the 1920s and 1930s by Israel’s founding fathers, visionaries who were intent on restoring the species to its ancient home. Israel once again boasts a thriving date industry, with 65 million dollars in annual exports.

The reemergence of the date palm in Israel is, in my opinion, one of the many miracles of the rebirth of modern Israel. The regeneration of an ancient date palm from a 2,000- year-old seed is the icing on the cake!

According to Chazal, the word devash (honey) in Devarim 8:8 refers to the honey of the date. That honey was a staple of the ancient diet, and according to secular historians, date merchants were extremely wealthy. But Chazal tell us that the tamar (date palm tree) was also one of the most useful plants found in ancient Israel, as every part has a practical application. The leaves can be woven into baskets (recall that the lulav holder, with pockets for the myrtle and willow, is woven from palm fronds). The fibrous bark can be woven into strong rope. Indeed the midrash (Genesis Rabbah 41:1) unequivocally states, “As no part of the palm has any waste . . . so are there none worthless in Israel.” No wonder that it became a symbol of Israel and the object of the Romans’ wrath. 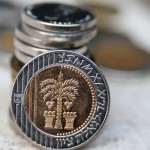 Image of the date palm on the ten shekel coin. Photo: Yehoshua Halevi

The date palm is tall and stately, a tree of stature (Shir Hashirim 7:7-8) and the righteous are compared to the date palm in a verse familiar to many of us in the Psalm for Shabbat (Mizmor Shir L’Yom HaShabbat—Psalm 92:13): “Tzaddik katamar yifrach, The righteous will flourish like a date palm . . . . ” The tree has been a popular symbol of centuries. The Hasmoneans (Maccabees) adopted the date palm as a symbol of their victory during the Second Temple period. The Romans later placed the image of a defeated Judea sitting in despair under a palm tree on their coinage (the Judea Capta coin is on display in the Katarin Archaeological Museum). Modern Israel has retained the image of the date palm on the ten shekel coin used in today’s currency.

The successful regeneration of a flourishing tamar from a seed that lay dormant for almost 2,000 years reminds us that the Jewish nation, often represented by the tamar, has once again sprung back to life as a vibrant, flourishing people who have returned home.