The Af-Al-Pi Chen was one of the ships that participated in the struggle to bring Jews to Eretz Yisrael clandestinely during and after WWII. Today, it serves as a museum that dramatically tells the story of the heroic efforts to defy the British blockade. Photos: www.sasson-photos.com.

In the aftermath of the Shoah, hundreds of thousands of Holocaust survivors were stuck in DP (displaced persons) camps in Europe with no place to go. The doors of many countries remained shut to all but a small number of Jews, just as they were before and during World War II. Palestine was still under British control, and the White Paper of 1939, which restricted Jewish immigration, remained in effect. While it is difficult to imagine, as virulent anti-Semitism was rising across Europe, Great Britain decided to limit Jewish immigration to Palestine to 10,000 per year, for five years. An additional 25,000 was allotted for emergency refugees, but Jewish immigration was capped at 75,000. This policy officially remained in effect until the termination of the British Mandate on May 14, 1948, when the new State of Israel was born.

The story of the struggle to furtively bring Jews home to Israel in defiance of British opposition is dramatically told in the Clandestine Immigration and Naval Museum in Haifa on board the Af-Al-Pi-Chen, one of the actual ships that participated in this historic effort. The Museum, which features the story of the struggle over the right to live in the country as well as the history of the Israeli Navy, brings to life the fourteen-year period from 1934 to 1948 known as “Ha’apala,” or clandestine immigration. During this period, more than 100,000 people were brought to Eretz Yisrael by 116 ships (the vast majority between 1945 and 1948). Some of the ships succeeded in evading the British blockade. Many did not.

The British called Aliyah Bet “Illegal Immigration.” The Jews called it clandestine immigration, based on the belief that it is not illegal for a Jew to come home.

Perhaps the most famous boat in this endeavor is the Exodus, which left France in July 1947 with over 4,000 Holocaust survivors, including 655 children. The actual story is somewhat different than the fictionalized account made famous by Leon Uris’s book Exodus, and the movie of the same name.

On July 18, as the Exodus neared the shores of Palestine, a British destroyer rammed the ship and boarded it. A number of passengers were killed in the ensuing fight. The ship was towed to Haifa, where the passengers were forced onto a ship that took them back to France. At Port-de-Bouc, in southern France, the passengers staged a hunger strike and refused to disembark. The British eventually directed the ship to Hamburg, then to the British occupation zone, where they were forcibly removed and returned to DP camps. 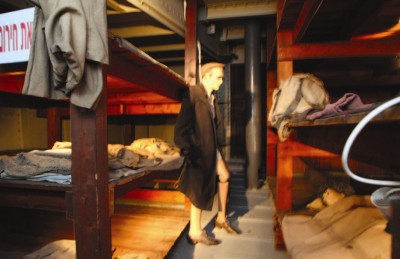 The inside quarters of the Af-Al-Pi-Chen, where 434 Jewish refugees slept in unimaginably crowded conditions en route to Eretz Yisrael in 1947.

In light of the Exodus, the Palyam, a unit of the Palmach, the elite fighting force of the Haganah that oversaw the clandestine immigration to Israel, decided to send another boat which they named the Af-Al-Pi-Chen (“Nevertheless”).

The boat was originally a Canadian tank carrier which had been refurbished by the Palyam with bunk beds, stacked five high, and two narrow aisles for passage between the beds. Today, no more than 75 to 100 people can sit in a theater in the hold where in 1947,434 Jewish refugees slept. The name Af-Al-Pi-Chen was chosen to underscore the determination to continue the efforts to bring Jews home, despite the British blockade preventing Jews from reaching Eretz Yisrael.

Like the Exodus, the Af-Al-Pi-Chen was also captured by the British as it entered the territorial waters of Palestine, but, due to the pressure of world opinion generated by the incident with the Exodus only weeks before, the British initiated a new policy—deporting immigrants to camps in nearby Cyprus to await “legal” entry into Israel.

In this boat-museum, the stories of the Ha’apalah and of the Af-Al-Pi-Chen are told primarily through photographs, documents and models. The most moving part of the exhibit is a film that dramatically tells the story of the ship. Children will especially enjoy walking on the deck of the ship and standing where the captain once stood. There are also a number of short films on the boat describing life in the camps in Cyprus and other aspects of this tumultuous period. The boat, by the way, is not on the water, but is in a dry dock on the opposite side of the main road that leads along the coast into Haifa.

The Museum also documents the history of the Israeli Navy. This includes a moving memorial to the sixty-nine sailors of the Dakar, the Israeli submarine that disappeared without a trace on its maiden voyage in 1968, and whose remains were only discovered near Cyprus in 1999. There are also a number of ships that visitors can explore, including a retired submarine.

The Museum is located at 204 Allenby Street (Tel. 04.853.6249) and is open Sunday through Thursday. At the front desk, you can request an English screening of the film.

Directly across from the Museum of Clandestine Immigration, on the opposite side of Allenby Street, is an important holy site—the Cave of Eliyahu Hanavi. Many events in the life of Eliyahu are believed to have taken place there—he prayed in the cave before his confrontation with the prophets of Ba’al on Mount Carmel (I Kings 18) and he hid there when fleeing the wrath of the evil King Ahab and his wife Jezebel. Today, Jews visit the site to daven. Because of the key role that Eliyahu plays at every circumcision, it is not uncommon to see a brit taking place at the cave.

In the immediate vicinity, there is also a cable car that transports riders from a station directly across from the Museum (Bat Galim Beach) to the top of Mount Carmel. The ride is short, but the views of the Mediterranean and Haifa are spectacular. As you take in the scenic view of the Mediterranean, remember that it is the same body of water that served as the highway to freedom sixty-five years ago for the remnants of European Jewry—people who came with a spirit of defiance and determination to the shores of Palestine to rebuild their lives and the Jewish State.