Since the passing of Moreinu v’Rabbeinu HaRav Aharon Lichtenstein, zt”l, many people have asked me, “Did you know him well? Did you have a relationship with him?” This seems to be a perfectly understandable question, since the sense of loss one feels with someone’s passing corresponds to the depth of the relationship one had with the niftar. In this instance, however, it’s a faulty assumption and—with all due respect—the question rings hollow.

At the end of a devar Torah I wrote some years ago, I thanked those who had helped me in my religious development since my bar mitzvah. I concluded with the following: “Of all these people though, there is one individual I would like to particularly thank: my rosh yeshivah, Rav Aharon Lichtenstein. I have probably learned more from him—directly or indirectly—than from any other personality I have encountered. And all this though I’ve spoken less than a thousand words to him.” Quite frankly, had I spoken no words to him, the above sentence would remain equally true.

Any act in the service of God was not something to be outsourced; if he had the strength, he was going to perform it himself.

One of the ways in which Rav Aharon’s impact was felt was through his tefillah. Rav Lichtenstein would daven for the amud on the yahrtzeits of his parents. When he davened, there was a vivid sense of God’s presence. In many synagogues, the verse “know before Whom you stand” is displayed, yet 99 times out of 100, we fail to think about this. When Rav Lichtenstein davened, however, there was no mistaking before Whom we were standing and, consequently, what our purpose in life is. During chazarat hashatz, Rav Aharon uttered every word of the tefillah with painstaking focus and intensity, though no adjective can do Rav Lichtenstein’s devotion justice. Witnessing him daven invariably inspired one to engage in a cheshbon hanefesh; during those few precious minutes, one’s priorities in life suddenly became abundantly clearer, and summoning the strength to pursue proper life goals became exponentially easier. If this sounds somewhat like how one feels on Yom Kippur, that is because Rav Lichtenstein’s Minchah on a random day was indeed like Minchah on Yom Kippur for the rest of us.

Rav Lichtenstein’s parents’ yahrtzeits were 6 Elul and 13 Elul. I arrived at yeshivah on the first of Elul; thus, within two weeks—witnessing his davening on the yahrtzeits and on the Shabbatot preceding each yahrtzeit—I essentially experienced four mini Yom Kippurs before Selichot even started. Had I come to the Gush and stayed through the Yamim Noraim only, my life would have been transformed forever. Considering that I was privileged to stay two years and hear numerous sichot and shiurim from Rav Lichtenstein, the impact was only magnified.

Once, while in the grocery store on erev Shabbat, Rav Lichtenstein bought flowers and other groceries for his wife. Rav Lichtenstein was known to eschew honor, but aside from the fact that he was my rosh yeshivah, he already had some difficulty walking, so I offered to carry some items home for him. With an appreciative smile, he kindly refused. Another time, I was about to enter the beit midrash when I saw Rav Lichtenstein coming and held the door open for him. It was a heavy glass door, which I imagined might be difficult for him to open in his weakened condition. They were double doors, however, and when Rav Lichtenstein arrived, he paid no heed to the open door and headed right to the other door, opening it himself. I wondered why he did so. I was rather certain his refusal of help had nothing to do with maintaining independence as he aged; Rav Lichtenstein knew how to accept assistance gracefully and with gratitude when it was needed. Rather, I believe that his refusals were simply manifestations of the fact that he was the consummate eved Hashem. He didn’t only serve God when learning; he served God when he was buying his wife flowers l’kavod Shabbat as well. And he didn’t only serve God when engaged in prayer, but also on the way to the synagogue. Any act in the service of God was not something to be outsourced; if he had the strength, he was going to perform it himself. To see this total dedication to avodat Hashem was itself inspirational, generating an unspoken demand that we improve our avodat Hashem. 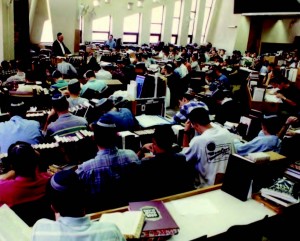 In an e-mail to a secular acquaintance of mine, I struggled to convey what Rav Lichtenstein meant to me. I settled on, “Someone passed away today in my life, not actually a family member, but as close to a grandfather figure as I’d ever had.” I could not help but think how strange this was, as Rav Lichtenstein was clearly not like a grandfather. He was way beyond that; more of a spiritual anchor for the entire community. The more I thought about it, though, the more I realized the two were not contradictory. Something that always astonished me was how Rav Lichtenstein’s eyes, which, at times—particularly when he was davening or giving an impassioned sichah—were fierce and penetrating were simultaneously the warmest, most welcoming eyes when wishing a “Shabbat shalom” or sharing some personal news. Since I never had a grandfather, Rav Lichtenstein was the closest anyone would come to filling that role for me. To be sure, he was not a grandfather in the traditional sense, but as long as Rav Lichtenstein was there, I knew everything would be all right. I could turn to him with anything, and though I generally did not do so unless it was a matter of great importance, merely knowing he could be my address in times of need was a most comforting feeling. He was a man filled with compassion for all, with a particular love for his talmidim. Rav Lichtenstein was not my primary rebbe. But if, as Chazal teach us, one’s rebbe is like his father, then being the talmid of his talmidim makes me a grandson of Rav Lichtenstein.

Chaim Goldberg is a senior at Yeshiva University and a first-year student at the Rabbi Isaac Elchanan Theological Seminary. He is the head advisor for NCSY Atlanta and staffed NCSY’s The Anne Samson Jerusalem Journey Ambassadors Poland this summer.