Most mornings, from 5:00 to 7:00 am, when the city of Jerusalem is just starting to wake up, Richard Corman can often be found sporting plastic gloves and lugging large heavy trash bags, picking up scraps of garbage on the streets of North Talpiot, Baka, Arnona and other Jerusalem neighborhoods. “Do you work for the iriyah [as a garbage collector for the municipality]?” curious passersby often ask him. “No,” he explains, he does not. So why does he set out on this garbage-hunting crusade in the early dawn? Because Richard is on a mission to keep the holy city of Jerusalem beautiful. At the same time, he wants to educate its residents about treating their “collective Jewish home” the same way they treat their private homes.

“I love getting my hands dirty,” Richard says. “[I love] doing things and not just pushing paper. This country gives you so much freedom to think and dream and make your dreams a reality. It’s like a large laboratory for ideas.”

Richard, who retired from a stellar career in Jewish communal leadership and fundraising, made aliyah from the United States in 2011. Soon after he arrived in Israel, he grew tired of
hearing people complain about the garbage littering the streets of Jerusalem. He decided to spend time clearing away the litter in the local streets, parks, bus stops and lots in his neighborhood. 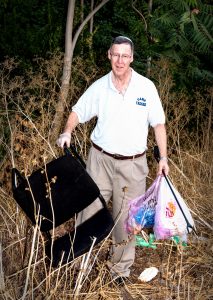 Richard Corman, who spends his mornings picking up litter, is on a crusade to keep the holy city of Jerusalem beautiful. Photo: Yehoshua Halevi

Richard’s concern for the environment eventually led to a meeting with Naomi Tsur, a former deputy mayor of Jerusalem who oversaw the sanitation and environmental departments of the city. Tsur subsequently created Jerusalem Green Fund, a nonprofit organization dedicated to keeping Jerusalem clean and to enhancing the environment in the city. She invited Richard to join her. Tsur serves as the chair and Richard as vice chair.

Richard is part of a growing number of retiree olim who are choosing to spend their time giving back to the country they love. Drawing upon their professional skills or their inborn talents, these high-energy retirees are happily giving of their time and expertise to contribute to Israeli society.

Nearly 600 Anglo retirees made aliyah in 2015, according to Nefesh B’Nefesh. Many volunteer at museums, charity organizations, children’s organizations or food kitchens, developing a new network of friends while doing so. “There is a growing trend of empty nesters and retirees who are making Israel their home,” says Miriam Naiman, post-aliyah advisor for Nefesh B’Nefesh, who specializes in working with the retiree population. “Some come on aliyah because their children are already here; others are finally living out their dream.”

Miriam maintains that volunteering is a great way to help the senior olim population acclimate into Israeli society. Making aliyah at an older age presents numerous challenges, admits Miriam, even for those who have spent significant time in Israel vacationing. “You don’t have to pay the bills when you are a tourist,” she says. Volunteering helps olim integrate culturally and socially, assists them in acquiring the language and gives them the feeling that they are needed. “We all need to feel needed, and to feel like a successful member of society.”

Retiree olim can also use volunteering to explore new facets of themselves. “One of the beauties of starting a second chapter of life,” says Miriam, “is that you can take a totally new direction.”

The variety of volunteer opportunities in Israel is truly remarkable. Annie Hersovitz, a recently retired American olah who had been living in England, made aliyah in 2014. Her career had been a stressful one; she had been a social worker consultant in cases involving domestic violence against the elderly and the mentally challenged. In Israel, she was looking for something different. A friend recommended she volunteer at the Biblical Zoo in Jerusalem, an easy commute from her 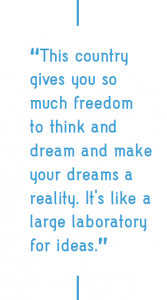 apartment. As Annie puts it, “Being a child of European Jewish parents who taught me that no respectable Jew has anything to do with something that has four legs, I thought, ‘I have to give it a go.’” On her first day, she was introduced to the staff of eight. While trying to remember all the names of her new colleagues, Annie was taken by her supervisor to a section where the animals were kept. Her supervisor began the introductions: “That’s Moshe,” he said pointing to a giraffe. “This is Naftali . . .” Annie could barely maintain her composure.

Annie looks forward to her weekly visit to the zoo, where she is responsible for feeding and cleaning up after the goats, sheep, rabbits, miniature horses, alpacas and kangaroos. She arrives at 7:30 am and helps get the animals ready prior to the zoo’s opening.

Annie’s favorite part of the job is being outside in the fresh air and learning about the animals. “They are used to being with humans,” she says. The first day we walked out to the animals, and they were all lined up, like children in the schoolyard. You clap your hands and announce ‘habaytah’ [go home], and they go to their areas to get fed. When I’m cleaning, they know to move aside and let you clean. The animals that misbehave, usually the males during mating season, are separated for a while. When I saw them for the first time enclosed in this restricted area, and didn’t know why, the staff told me those animals are ‘b’galut’ [in exile].” She laughs. “So now I’ve been b’galut twice in my life.”

Volunteering seems to have no age limitations. If you can make a contribution, you are welcomed. Consider seventy-seven-year-old Eric Woolf.

Eric, from London, has been living in Israel for the past two years. In 1968, he traveled to Israel with his parents and fell in love with the land, promising himself to return some day. It took a few decades, but he kept his promise.

Eric’s daughter, who lives in Israel as well, volunteers at Yad Sarah. The largest national volunteer organization in Israel with more than 6,000 volunteers, Yad Sarah provides free or nominal cost services designed to make life easier for sick, disabled and elderly people and their families. Inspired by his daughter’s work, Eric decided to volunteer there as well.

Yad Sarah is most known for lending medical and rehabilitative equipment—from crutches and wheelchairs to oxygen concentrators—on a short-term basis free of charge to anyone who needs it; the organization boasts a stock of over 250,000 items. This proved to be a perfect fit for Eric, who in his youth had worked in his father’s real estate business, becoming very skilled in home improvement and construction.

When Eric first arrived at the Yad Sarah offices, he was put to work repairing wheelchairs. 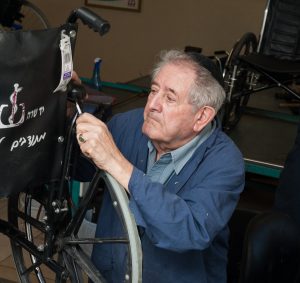 “The wheelchairs come in by the hundreds, and I work on them with a group of about twenty men, most of whom are in their seventies and eighties,” he says. “We work in a huge room. We look at what needs replacing—wheels, brakes, handles—whatever. We get the spare parts needed, replace the parts, give the wheelchair a good washing and it’s like new. I

volunteer one morning a week for three hours. During that time, I can fix between one and four chairs, depending on what needs to be done.” Eric gets most emotional when he sees a chair is beyond fixing, or when a small child’s wheelchair arrives. Chairs that cannot be fixed are disassembled for parts. He recalls one child’s chair that needed a new tire. Despite searching through hundreds of boxes of used tires, he could not find what he needed. Finally, in a moment of inspiration, he knew what to do: “I had to be creative and use a tire from the bicycle shop.”

Working in Yad Sarah gives Eric a fresh perspective. A recent experience left a deep impression on him: He saw a woman in a wheelchair who had no lower legs. “I immediately thought about my hands,” he says. “I thanked God for my hands and for giving me the ability to do useful things with them.”

Finally, there’s Chana Spivack, an olah who arrived from Boca Raton, Florida to Jerusalem in 2011. Chana remembers when she was a child attending Hebrew school in Ellenville, New York, receiving wildflower bookmarks made by young girls in Israel; the girls invited their American counterparts to become pen pals. “I was fascinated by the stories I heard of pioneers forging a place for themselves in this new land, our Jewish State,” Spivack says. “I wanted to be one of those pioneers; I wanted to make a difference.”

Life, however, got in the way. She married, divorced and moved to Florida to raise her son near her parents. “It just never seemed to be the right time [to move to Israel]; until it was.” When her parents passed away at the age of ninety-one, Chana decided to take early retirement and fulfill her aliyah dream.

Chana’s love for learning Torah brought her to the Seymour J. Abrams Jerusalem World Center (the OU Israel Center). Subsequently, she began to volunteer for the Travel Desk, an ideal position for the outgoing olah who was looking to meet new people and learn about her new country. A busy department at the OU Israel Center, the Travel Desk plans tiyulim for tourists and Israelis, covering the full expanse of Jerusalem and Israel. 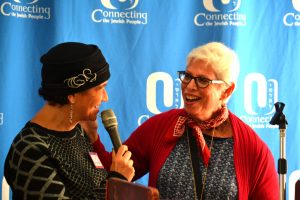 Chana recently expanded her responsibilities by becoming volunteer coordinator of the OU Israel Center, where she oversees a cadre of individuals who dedicate their time and skills to enhance the Center’s multi-faceted programs. While the Center boasts hundreds of volunteers who assist in its various programs, the majority are involved with Torah Tidbits, a widely read weekly publication. A group of 225 volunteers comes to the center every Wednesday to pack and deliver Torah Tidbits to over 400 synagogues and communities throughout Israel. “Chana’s work recruiting and overseeing our volunteers is expanding our reach, and is crucial in our mission of making the OU Israel Center a second home for Anglos in Israel,” says Rabbi Avi Berman, executive director of OU Israel.

With people living well into their eighties and nineties and the senior population on the rise in Israel, there is a great need to tap into this reservoir of talent and skill and encourage this population to explore new adventures in volunteerism. “Seventy is the new fifty,” says Miriam Naiman of Nefesh B’Nefesh. Volunteering, she says, can be a very fulfilling way to “blend one’s experience and knowledge within a new framework. It’s a wonderful way to integrate into Israeli society, while giving and getting at the same time.”

Irv Cantor is retired and made aliyah in 2012. He is an active volunteer in Jerusalem.