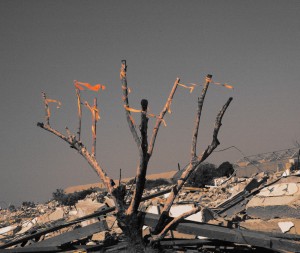 Tree with orange ribbons, the color representing opposition to the disengagement, against the backdrop of a destroyed home in Moshav Gdid. Courtesy of Debbie Rosen

Choosing three people to relate their personal experiences of the uprooting of their families from Gush Katif was an impossible task. Each story, each person and each community is different. We decided to go with three young people, who ranged from age sixteen to twenty-five during the disengagement, to see how it affected them at the time, and how they moved on. 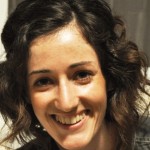 Livnat Farjun was twenty years old at the time of the evacuation. She had completed her National Service and was studying in a midrashah (institute of higher Jewish learning for women) in Gush Katif. She lived with her family in Moshav Bdolach.

Bdolach was a small settlement with only thirty-four families. Most of the men were farmers and the women were educators. My father owned greenhouses, in which he grew chives for export. My mother was an arts and crafts teacher in the elementary school.

We were in close contact with the surrounding moshavim in the Gush. We studied in the same schools and had joint events. We lived near the sea and spent a lot of time there.

When I heard the announcement regarding the evacuation, I thought, “How could our government demand the destruction of such a beautiful region—one that we had built with tremendous effort?” I set out, together with others, to try and prevent the evacuation from happening—through demonstrations, various campaigns and a great deal of prayer.

I knew there was a strong possibility that it might happen, but I believed that maybe something would prevent it. My parents also hoped it wouldn’t happen, but logically they knew it might come to pass. Therefore, they felt, we needed to prepare ourselves for that day and pack our belongings.

I feel that the pain we suffered went way beyond [losing our] home. We were pioneers; we had helped build Israel. Yet [there were many in Israeli society who] were not touched at all by our pain, who thought, “Big deal, so you lost your house. So what?” There was an attempt to delegitimize our feelings of loss, and that was the most painful of all.

There was also a great deal of peer pressure within some of the Gush Katif communities and their supporters to believe “haya lo tihiyeh,” “it won’t be” and that “people who really believe in God don’t pack up and leave.” This led some to denounce those who chose to take the practical route and prepare for the evacuation.

I was always taught that one does not depend on miracles. One believes in God and knows that all He does is for the good. But I heard some people say, “Perhaps there will be a miracle,” including some rabbis. Maybe these rabbis [did so] in order to encourage people to [be more forceful about the] struggle, but it had a negative effect afterward.

I do not believe that we can shut our eyes to reality. The rabbis should have said, “Friends, it might happen, but we won’t stop believing [if it does happen].” For years afterward, this made it difficult for me to choose a rabbi in whom I could place my trust.

I was born in the Gush,
Among the sand and the sea
The palm trees, the flowers
And since that time, I am here

Anyone who is thinking
Of speaking of surrender
I want him to know—
I have no other home.

The people of Gush Katif had moved there out of a sense of mission, a shelichut. It was a settlement built on love of and connection to the land. Suddenly, we were [being portrayed as] evil. Soldiers [were trained] to remove us from our homes with coldness and indifference. We were not viewed by them as heroic pioneers but as criminals. What was our crime? That we had built these yishuvim, these communities? The army prepared its soldiers [to treat us] as if we were violent people. Even those who shouted did not get violent, and their screams and refusal to leave came from a place of great pain, the shattering of a great dream they had built with their own hands.

At the time, I felt that the government of Israel had abandoned us, as if we were no longer a part [of the Israeli nation]. And throughout the years that followed, the overwhelming bureaucratic difficulties that I heard some had to endure added to the overall feeling of invisibility, of [the sense that] “nobody really sees us.”

On the other hand, there were those who were sensitive to our anguish. There was a woman in our neighborhood whose son had been murdered by a terrorist in their greenhouse. The soldiers, who knew she lived in our neighborhood, did not enter our area, but waited until we left on our own. There was a social worker who [despite the fact that she] was in favor of the expulsion, she did everything she could to help us overcome the trauma. And there were many such individuals.

I felt that the government of Israel had abandoned us, as if we were no longer a part [of the Israeli nation].

On the day of the evacuation, I cut myself off from what was happening around me; it was as if I was watching a movie, looking at the events from the outside—at the soldiers, the people. During the weeks that followed, the shock began to dissipate and what remained was a great deal of confusion, loss and pain.

I made a decision to not allow myself to plunge into despair and fury. It took me a long time until I allowed myself to truly cry [over this trauma], and to give expression to the pain. I also know that when I became a physical psychotherapist, I was better prepared to help people cope with various crises because of the crisis that I personally endured.

Having lived in Jerusalem for five years, I recently returned to live with my family in our new home in Be’er Ganim (“Well of Gardens”), near Ashkelon. Be’er Ganim is [an acronym] composed of the first letters of some of the communities in Gush Katif: Bdolach, Elei Sinai, Rafiach Yam, Gdid, Gan Or, Netzer Hazani, Nissanit, Neve Dekalim and Morag. Many refugees from these communities are building their new homes here.

When we were expelled
I tried
to write
a few
lines
but
my whole notebook
filled
with tears.

On one level or another, many residents of Be’er Ganim are still stuck in the Gush. The evacuation and the ensuing struggles still direct their lives. In fact, for many of them, the building of new homes causes all kinds of [emotional] issues to rise to the surface. Some of the refugees thought their lives would return to normal after they moved into their new homes. But they did not take care of their psychological needs after the evacuation, partly because they just needed to survive and put their lives back together. They also wanted to protect their children and were afraid that their families would fall apart. Many of them failed to mourn the evacuation properly.

A few of the young women doing their National Service in Be’er Ganim have told me that they feel that some of the families to whom they’re invited for Shabbat meals talk about the evacuation as if it happened last year. They are still traumatized.

[In response to this,] I began a program offering teva therapy, nature therapy, to community members. Nature therapy is an innovative treatment method that takes place in nature. Groups of people meet (in Be’er Ganim we often do it around a bonfire) to speak about difficulties they are experiencing. They speak about memories of life in Gush Katif, differences between then and now, feelings toward the establishment and finding ways to cope and develop resilience. The method is based on the idea that nature has resources for healing and encountering them can promote parallel processes in humans.

The program is [geared] for members of my parents’ generation—for those individuals who had built the Gush and had spent their lives there. Many of them, including my father, have still not successfully adjusted to their new lives. My father is a driving teacher after being a farmer for so many years, but he views it as a job, not as the fulfillment of a personal dream [which farming was to him].

On a personal level, in spite of the fact that I moved forward and acquired a profession, and I have hobbies and interests that fill my world, I am still seeking my home—a desire to belong, a yearning for the feeling of community that existed in the Gush and was lost.

I am trying hard to build my internal home, and to feel safe ground beneath my feet again.